Restrictions were put in place here in the wake of the abrogation of the special status under Article 370 of the Constitution. 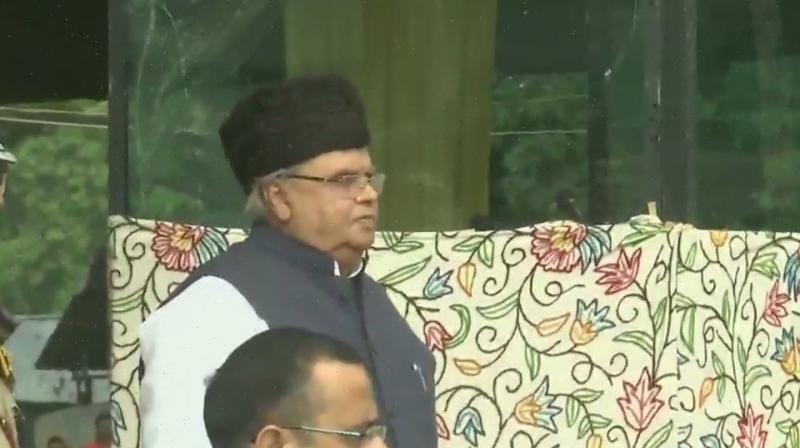 After unfurling the flag, Malik inspected the parade of para-military forces and Jammu and Kashmir Police. (Photo: ANI)

Srinagar: Governor Satya Pal Malik hoisted the national tricolour at the Sher-e-Kashmir stadium here in the first Independence Day celebration in Jammu and Kashmir after the abrogation of its special status.

On the occasion, Malik called the Centre's decision to abrogate Art 370 a historic one.

"The changes that the Central Government has brought are not only historic but also open a new door for the development of the people of Jammu-Kashmir and Ladakh," he said addressing the gathering here.

The Governor assured the people of Jammu and Kashmir that their identity is not at stake and has not been tampered with.

He added that the constitution of India allows different regional identities to flourish.

After unfurling the flag, Malik inspected the parade of para-military forces and Jammu and Kashmir Police. Restrictions were put in place here in the wake of the abrogation of the special status under Article 370 of the Constitution.

Principal Secretary in the Jammu and Kashmir administration Rohit Kansal had said restrictions were eased out in various parts of Kashmir, including Srinagar city, where peace prevailed on Wednesday. He, however, said reasonable restrictions are put in place to maintain the law and order situation in the Valley.

The situation in Kashmir continued to be calm since the abrogation of the special status of Jammu and Kashmir on August 5 as no major incidents were reported and due to this, the government has given further relaxation in prohibitory orders in many areas, the officer had said.