‘Never imagined I would be flown at supersonic speed’: Rajnath on Rafale sortie

Giving timeline for delivery of 36 jets, Singh said he expects first 18 aircraft to be delivered by Feb 2021. 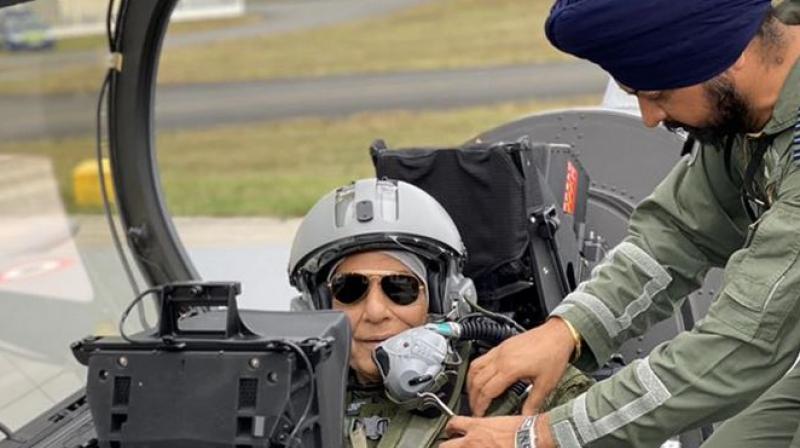 Singh, who changed into combat flight gear for the ride after he had performed a Shastra Puja on the plane at Merignac airport, said the aircraft will enhance the Indian Air Force combat capability massively -- intended only for self-defence. (Photo: Twitter)

New Delhi/Merignac: India does not purchase arms to threaten any country but to increase its defence capabilities, Defence Minister Rajnath Singh said on Tuesday after his nearly 25-minute sortie in the Rafale combat jet which he described as “very comfortable and smooth”.

Singh, who changed into combat flight gear for the ride after he had performed a Shastra Puja on the plane at Merignac airport, said the aircraft will enhance the Indian Air Force combat capability massively -- intended only for self-defence.

“We do not purchase arms and other defence equipments to threaten any country but to increase our capabilities & strengthen our defences. The credit for the acquisition of the Rafale jets must go to PM @narendramodi. His decisiveness has greatly benefited our national security,” Singh tweeted.

Describing his sortie in Rafale as a memorable and once in a lifetime experience, 68-year-old Singh said, “I had never imagined that I would be flown at supersonic speed; a very comfortable and smooth flight during which I was able to observe the many capabilities of the jet, its air-to-air and air-to-ground combat capabilities”.

On September 19, Singh flew in the Tejas fighter aircraft from the HAL airport in Bengaluru, becoming the first defence minister to fly in the indigenously-built light combat aircraft (LCA).

“This aircraft marks a massive enhancement in the Indian Air Force combat capability but that enhancement is not for attack purposes but as a deterrent for self defence. And, the credit for this milestone goes to Prime Minister Narendra Modi, whose decisiveness has made this crucial air enhancement possible today,” he said soon after landing.

“I perform Shastra Puja every year in Lucknow and today I took the Rafale as the Shastra for the Puja here in France,” Singh added.

Giving a timeline for the delivery of the 36 jets acquired by India, the minister said he expects the first 18 aircraft to be delivered by February 2021, with the remaining expected by April-May 2022. Air Marshall Harjit Singh Arora, the Vice Chief of Air Staff who watched over as the minister took flight in a sortie in the Rafale aircraft, said that the newly-acquired Rafale combat for the IAF will mark a significant enhancement in India’s air potency once they are stationed at Ambala in Punjab and Hasimara in West Bengal.

While the first of 36 high-precision Medium Multi-Role Combat Aircraft with 13 India-specific enhancements sought by the IAF was delivered during the symbolic induction ceremony to the defence minister, the IAF now expects to get delivery of one aircraft every month.

These jets will remain in France for training purposes before the first four being ferried to India in May next year. The first set of 18, the squadron intended for Ambala, are expected to be in place by February 2021 and the remaining 18 for Hasimara by May 2022.

“It is a historic moment today, which marks a significant enhancement in India’s precision weapons capability defence system, with the most important aspect of the Rafale being its missile capability,” said Air Marshall Arora, who has himself flown the aircraft as a co-pilot.

He revealed plans for a state of the art simulator to be put in place in India in order for pilot training to be conducted in France as well as India.

“It is by far the most potent platform for India’s air defence,” Arora added.