UP rape: Last rites of victim conducted with UP cabinet ministers in attendance

The last rites were performed on a piece of land belonging to the victim's family. 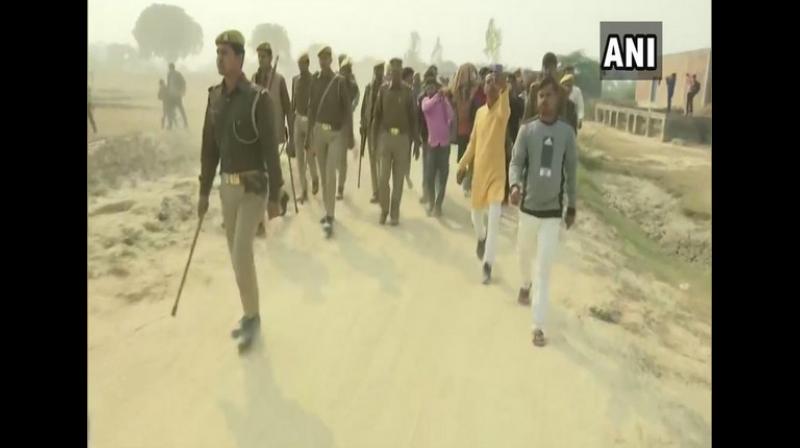 The administration had also assured of giving round the clock protection to the victim's sister and issuance of an arms license to her brother based on their demands and apart from this the family's demand to meet Chief Minister Yogi Adityanath had also been accepted. (Photo: ANI)

Unnao: The last rites of the Unnao rape victim was conducted by her family amidst heavy security on Sunday, after receiving assurance from the administration that all their demands will be met.

The last rites were performed on a piece of land belonging to the victim's family.

Cabinet ministers in the Uttar Pradesh government Swami Prasad Maurya and Kamal Rani Varun also arrived in Unnao to meet the bereaved family and attend the last rites of the deceased.

"We are committed to punishing the culprits and we, including the Chief Minister, are standing in solidarity with the bereaved family. We will do anything to punish the culprits, a fast track court has been set up to nail them," Maurya told reporters here.

The minister also urged the Opposition parties to stop politicising the matter of the death of the Unnao rape victim.

Earlier, the Uttar Pradesh administration had said that all the demands of the victim's family have been accepted.

Lucknow Divisional Commissioner Mukesh Meshram said that they held talks with the victim's family and assured them of all possible help and assistance.

"Whatever their demands -- that case should be put to trial in fast track court so that culprits are given strictest punishment on time...apart from that, the family of the deceased victim is poor, and their resources are very limited. We would provide them facilities which can be sanctioned by the government," Meshram said while speaking to reporters here.

The administration had also assured of giving round the clock protection to the victim's sister and issuance of an arms license to her brother based on their demands and apart from this the family's demand to meet Chief Minister Yogi Adityanath had also been accepted.

Along with these, Meshram, during the course of his meeting with the victim's family, had also assured two houses under Prime Minister Awas Yojna to them.

After battling for life at Delhi's Safdarjung Hospital, the victim, who was set ablaze while on her way to a court hearing on Thursday morning, died at 11:40 pm on Friday.

The 23-year-old was airlifted from Lucknow's SMC Government Hospital to Delhi for treatment at Safdarjung Hospital on Thursday.

According to the police, the five accused had allegedly thrown kerosene on the woman and set her ablaze when she was on her way to a local court for the hearing of the case she had filed in March.