Flags were put up on the outer side of the main gate number one of the assembly complex, which have now been removed by the administration 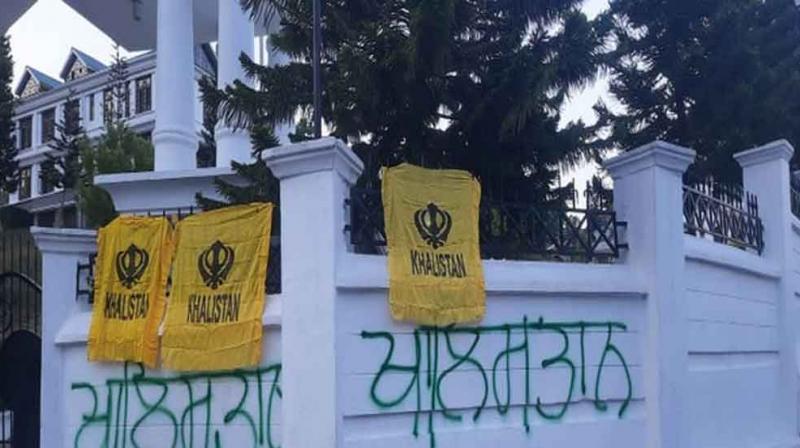 We have removed the Khalistani flags from Vidhan Sabha gate. we are investing and going to register a case, SP Kangra Khushal Sharma said. (ANI)

Dharamsala: Khalistan flags were found tied on the main gate and slogans written on the walls of the Himachal Pradesh Legislative Assembly, police said on Sunday.

The flags were put up on the outer side of the main gate number one of the assembly complex, which have now been removed by the administration.

It might have happened in the late night or early morning today. We have removed the Khalistani flags from Vidhan Sabha gate. we are investing and going to register a case, SP Kangra Khushal Sharma said.

SDM, Dharamshala, Shilpi Beakta said, "It is an alert call for us."

"We received an information this morning at around 7.30am. We have removed the flags and walls have been painted again. We are inquiring about the matter and are going to register a case under relevant sections of Himachal Pradesh Open Places Prevention of Disfigurement Act, 1985. Rest details can be shared after investigation".

Local MLA Vishal Nehria said termed the incident disgusting and an act of cowardice carried out in the darkness of night.

"We, the Himachalis, and the Indians are not afraid of any threats from the supporters of so-called Khalistan, the MLA said.

The National Secretary of Congress Sudhir Sharma also termed the incident as unfortunate.

It is unfortunate that the flag of Khalistan at the entrance of the Dharamsala assembly and slogans are written on the walls, while the non-working of CCTV and the absence of security personnel raises question marks on the administration and security agencies. Recently, the efforts being made to create such an environment in Punjab, and Himachal are a matter of concern. We the people of Himachal will give our lives for the integrity of the country, but we will not allow such forces to flourish. Jai Hind, he tweeted.