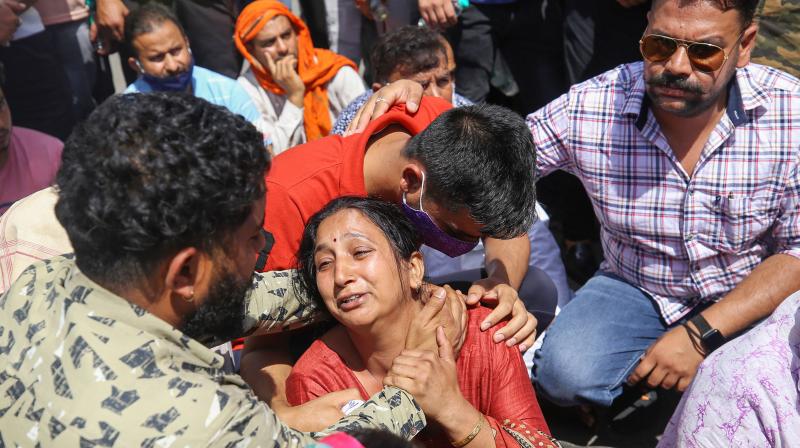 Sister of CRPF Commando Rakeshwar Singh Manhas reacts during a protest, demanding his release from the captivity of Naxals, in Jammu on April 7, 2021. (PTI)

Raipur: The Maoists on Wednesday released a picture to establish that the jawan missing in the April 3 Naxalite ambush on the security forces in Terram area on the Sukma-Bijapur border in Chhattisgarh’s south Bastar region has been held hostage by them.

This development comes hours after the Dandakaranya Special Zonal Committee (DKSZC) of the outlawed CPI (Maoist) issued a press release confirming that the missing CoBRA commando, Rakeshwar Singh Manhas, was in their custody as a “prisoner” and that he was safe.

The press release issued by DKSZC spokesman Vikalp late on Tuesday evening asked the government to nominate interlocutors to negotiate the release of the “hostage”.

“The jawan will be safe as long as he is in our custody”, the press release said.

The picture released by the Maoists shows the CoBRA commando sitting on a green tarpaulin in a makeshift hut made of dry palm leaves, possibly in a forest. The jawan seemed in a relaxed mood in the photo as there was absolutely no sign of anxiety on his face as usually seen in the case of a hostage.

The jawan’s colleagues said the photo looked old and he seemed to have no injury either in the picture.

A senior police officer posted in Bastar told this newspaper the police was verifying the authenticity of the photograph and trying to identify the location of the missing jawan.

Sources meanwhile said the missing jawan’s location has been identified. But they refused to elaborate further in the interest of his security.

The issue figured in the state Cabinet meeting chaired by Chhattisgarh CM Bhupesh Baghel on Wednesday. Mr Baghel indicated efforts were on to secure the missing jawan’s safe release.

In another development, local AAP leader Soni Sori has volunteered to negotiate the release of the missing jawan with his captors. The “self-appointed” interlocutor told the media before venturing into the forest: “My main objective is to identify the location where the jawan is held hostage and what is his condition”.

Ms Sori said she would put forth the demand for the jawan’s release with the Naxals.

The Maoists ambushed a joint team of security personnel near Jonaguda village under Terram on April 3, killing 22 jawans and injuring 31 others.

Rakeshwar had gone missing in the incident.