India will host the G20 Summit in September next year, and India’s G20 Sherpa Amitabh Kant is expected to outline India’s priorities 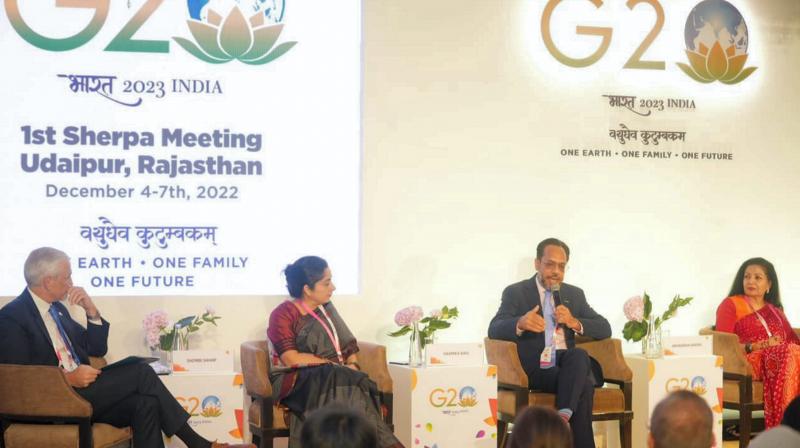 New Delhi: The first four-day G20 Sherpa meet under India’s presidency began in Udaipur on Sunday, with the main deliberations expected to begin from Monday and end on Wednesday. India will host the G20 Summit in September next year, and India’s G20 Sherpa Amitabh Kant is expected to outline India’s priorities.

Kant flagged issues such as charting the path for inclusive, resilient and sustainable growth, accelerating the pace of creating better livelihood and improving healthcare and quality of life as the world recovers from the Covid-19 pandemic.

“We are passing through massive geopolitical crisis. We have seen the breakdown of global supply chains, countries suffering from rising debt and the huge crisis of climate action and climate finance,” Kant said, addressing a side-event on Sustainable Development Goals (SDG).

In a statement, New Delhi said, “The four-day gathering... of the Sherpas of G20 members, invited countries, and international organisations will set the stage for important conversations on some of the most pressing issues of our time, including technological transformation, green development and LiFE, spotlighting women-led development, accelerating implementation of the SDGs, and facilitating inclusive and resilient growth.”

It added the first Sherpa meeting sets the tone and agenda for future meetings and such events would work towards building consensus on key cross-cutting issues and pave the way for the Leaders’ Declaration at the G20 Summit.

Earlier, in an informal chat with reporters Kant said the presidency of G20 has given an opportunity to India to place the issues of the developing countries on the agenda of the multilateral forum.

“Earlier, we used to get agenda items from the developed world. Now, we get to set the agenda for the G20 meeting. We will tell the world that we are the mother of democracy,” Kant said.