The state election commission has started preparations for the assembly polls, which are slated to be held by the end of this year 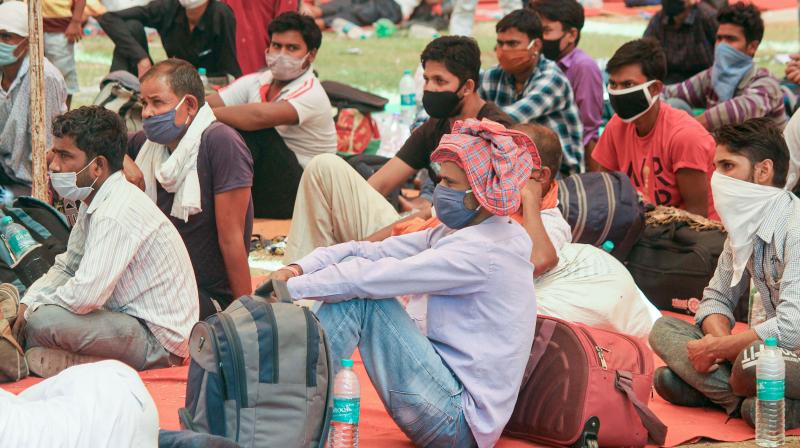 Migrants wait to board a bus for Bihar at Tau Devi Lal Stadium, during the ongoing COVID-19 lockdown, in Gurugram, Tuesday. PTI Photo

Patna: Bihar has been so caught up in the throes of the coronavirus pandemic that little thought has been given to what impact thousands of angry, jobless and exhausted workers will have on Nitish Kumar's hopes of winning the next state election, which have to be held this year.

Almost all political parties are already trying to woo the workers, who are still streaming in. A majority of these workers have lost their jobs and are now looking for a livelihood in Bihar. A large number of them are from the backward classes and this may change the political equation in many seats.

The RJD recently held a meeting in Patna to discuss the scenario. Sources said party workers have been asked to highlight the failures of the central as well state government in handling the crisis. Many of the guest workers returned home on their own, walking, cycling, or hitching rides on trucks and trains.

“Why can’t our government see the pain of our workers? Instead of sharing their pain and sorrow, they (the ruling party) are busy doing politics,” RJD leader Tejashwi Yadav said while sharing a video song highlighting the problems faced by guest workers.

RJD workers in Patna said the video song shared by Tejashwi Yadav on Twitter will be circulated on social media.

“The Bihar government kept waiting for the Centre’s guidelines to rescue our workers who were stuck in other states due to the lockdown. Many of these workers were infected due to the mishandling of our government. Our workers who have returned will give a fitting reply to the current regime during the assembly elections,” RJD national vice-president Raghuvansh Prasad Singh told reporters.

In a tweet, Tejashwi Yadav said that “the government wants to hide the reality behind this virtual rally. We have been trying to provide food and relief to the poor. All our party workers and people of Bihar will step out of their house on June 7 and beat thali (plates) and bowls to protest against the BJP’s decision to hold rallies for elections instead of thinking about the poor and needy”.

The state election commission has started preparations for the assembly polls, which are slated to be held by the end of this year. Recently, the chief electoral officer of Bihar H R Srinivas held a meeting with DMs and SPs of all 38 districts and discussed issues related to security arrangements, VVPAT machines and revision of electoral roll etc.

In Bihar, 243 Assembly constituencies will go to polls and challenges faced by the election commission this year would be conducting elections keeping social distancing in mind.

“Since we are in the last six months considered to be the election period so we are making all the necessary preparations. We have held a video conference with all DMs and concerned officials on various stages that we have to undergo for the successful completion of the election. We have to look into the VVPAT and EVM availabilities and summary revision of those voters who have been left out,, CEO Bihar H R Srinivas told reporters in Patna.

He also added that “there has been a large influx of guest workers in Bihar and this we have to keep in mind while making preparations”.