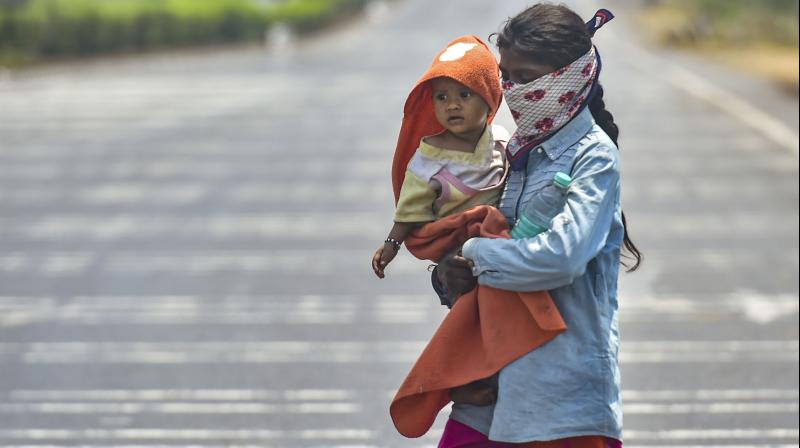 A stranded migrant worker carries a child as she crosses the Mumbai-Ahmedabad Highway during the nationwide lockdown in Palghar, Maharashtra. PTI photo

New Delhi: Voicing concern about the plight of migrant workers in the unorganised sector, the Supreme Court on Friday sought the Centre’s response on a PIL seeking the payment of wages to migrant workers, including the self-employed, following the coronavirus-triggered nationwide lockdown.

Saying it was “particularly concerned about the plight of migrant workers” during this crisis, a bench of Justices L. Nageswara Rao and Deepak Gupta sought a response even as the Centre objected to the PIL, saying: “PIL shops must be closed down”. The court will hold a further hearing on April 7.

The court sought the Centre’s response on a PIL by social activists Harsh Mandar and Anjali Bhardwaj seeking payment of wages to migrant workers in the lockdown period that both the Centre and state governments are obligated to pay under the Disaster Mana-gement Act. A similar plea by Swami Agnivesh was also taken up.