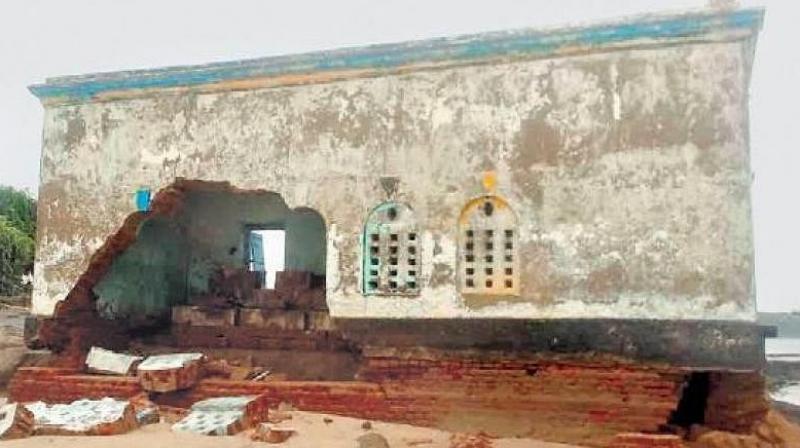 Locals would perceive the shrine as the "only visible sign of human existence" in Satabhaya village. (Photo: Twitter)

Kendrapara: The marauding sea that had been eroding the coastline in Kendrapara for decades, devouring one village after another, recently razed to the ground the centuries-old Panchuvarahi temple, dashing hopes of locals who often offered prayers there seeking respite from the scourge of Mother Nature.

The state government had in 2018 relocated as many as 571 vulnerable families to a rehabilitation colony at Bagapatia, located about 10 km from the sea coast, officials said.

It was the first such rehabilitation and resettlement initiative in the state for people displaced by sea erosion, they said.

Away from their hometown, much of which has been eaten up by the sea, some of its former residents, however, visited Satabhaya village from time to time to pay obeisance at the Panchuvarahi temple, although the idol of the deity has also been relocated to the rehabilitation colony.

Locals would perceive the shrine as the "only visible sign of human existence" in Satabhaya village, said Basant Sahani, one of its former residents.

With that gone, our last hope that the sea may stop its advance has also crumbled, he rued.

An official of Rajnagar tehsil in the district said people in Satabhaya and Kanhupur villages had long been wanting to shift to a safer place, unlike some neighbouring hamlets, where locals were skeptical about moving to a new area.

The government, after consultations with locals, set up the rehabilitation colony in Bagapatia, he stated.

Shivendra Narayan Bhanjadeo, the scion of an erstwhile royal family of Rajkanika and the trustee of the temple, said Satabhaya has lost its identity with the caving-in of the shrine.

The distance between the sea and the temple was around three kilometers some three decades ago. Now the sea has successfully gobbled up the centuries-old temple. For all practical purposes, Satabhaya has now lost its geographical identity, Bhanjadeo added.