India   All India  03 Jul 2022  Modi anguished over Opposition protests to all welfare schemes
India, All India 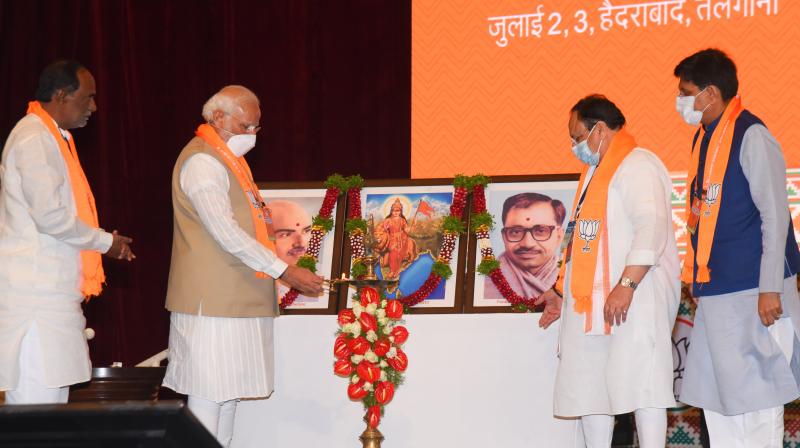 Hyderabad: Prime Minister Narendra Modi on Saturday expressed his anguish over the Opposition parties politicising every initiative of his government aimed at the country’s overall growth and uplifting the poor.

He was intervening in the discussion on the lone resolution on the economy and Garib Kalyan passed by the national executive on the first day. Defence minister Rajnath Singh introduced the resolution.

Sources told Deccan Chronicle that the Prime Minister asked party leaders and cadre to be more effective in countering Opposition propaganda against the party and the BJP-led NDA government at the Centre. He referred to the agitation over farm laws and attempts to instigate youth against the Agnipath scheme, sources said.

The first day of the national executive, however, stayed away from controversial issues, including the latest conflict over former spokesperson Nupur Sharma’s comments and subsequent attacks on those who supported her comments.

The Prime Minister also asked the presidents of all state units not to turn the home-stay programme into a routine and customary activity. “It’s not sufficient to just visit villages, we need to stay put for two or three days and interact with people, besides taking the government’s initiatives to them,” he said.

Modi also made a specific reference to the welfare of fishermen. Maintaining that the NDA entrusted the ministry concerned to a fisherman, he said the potential of the sector needed to be harnessed more in the backdrop of the country having lengthy coast both on the eastern and western sides.