Most of the victims were women and children, the DM said, adding that the toll is likely to go up 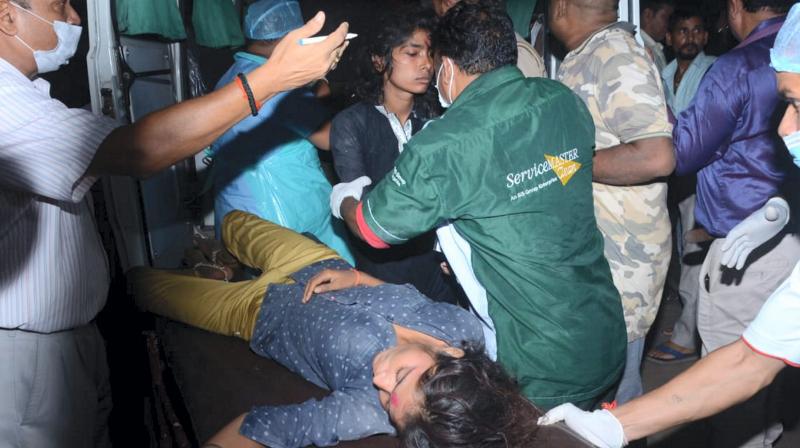 Injured arrives hospital in Kanpur after a tractor-trolley overturned and fell into a pond near a village in Kanpur district, Saturday night, Oct. 1, 2022. At least 22 people were killed and several critically injured. (PTI Photo)

Kanpur/Lucknow: At least 26 people were killed and several critically injured when a tractor-trolley overturned and fell into a pond near a village in Kanpur district of Uttar Pradesh on Saturday, District Magistrate Vishak G Ayyar said.

Most of the victims were women and children, the DM said, adding that the toll is likely to go up.

The incident occurred in the evening near Bhadeuna village located within the Saar police station limits, a senior official said.

Talking to PTI over the phone, Ayyar said the death toll has gone up to 26.

The tractor-trolley, carrying about 50 people, was on its way to Ghatampur after the passengers attended a "mundan" ceremony at the Chandrika Devi temple in Fatehpur, the official said.

He added that more than a dozen people were killed on the spot.

"Distressed by the tractor-trolley mishap in Kanpur. My thoughts are with all those who have lost their near and dear ones. Prayers with the injured. The local administration is providing all possible assistance to the affected," Modi said in a tweet.

The injured would be given Rs 50,000, the prime minister said.

Adityanath has sent ministers Rakesh Sachan and Ajit Pal to the accident site to speed up the rescue operation.

The chief minister has also appealed to people to use tractor-trolleys only for purposes related to farming and transferring goods and not for carrying passengers, according to an official release issued in Lucknow.

An eyewitness told reporters that he, along with others, rushed to the site hearing the cries of men, women and children for help.

The locals immediately jumped into the water and somehow managed to pull out the victims, some of whom were already dead, he said.

The injured were taken to the community health centre (CHC) at Bheetergaon, where some of them were declared brought dead, he added.

GSVM Medical College principal Sanjay Kala told reporters that several of the injured have been referred to the Lala Lajpat Rai (LLR) Hospital.

According to officials , the injured were first rushed to the Bheetergaon CHC in ambulances arranged by police and more than a dozen were declared dead at the facility.

A government spokesperson in Lucknow said the chief minister is personally monitoring the rescue operation and has announced an ex-gratia amount of Rs 2 lakh each for the kin of the deceased and Rs 50,000 each for those seriously injured.

"An investigation is on to ascertain the reasons behind the accident," the DM said.

The district administration has been told to carry out the rescue operation and ensure all possible assistance to the victims, he added.

In a tweet, Adityanath said: "The road accident in Kanpur district is heart wrenching. The district magistrate and other senior officers have been directed to reach the spot immediately, conduct the relief-and-rescue operations on a war footing and make arrangements for the proper treatment of the injured.

"The loss of lives in the accident is very sad. My condolences are with the bereaved families. Praying to Lord Ram to grant the departed souls a place at his feet and courage to the families of the deceased to bear this unfathomable loss."

In a tweet, Yadav said: "In Uttar Pradesh, transportation in tractor trolleys is continuously going on. The transport department is oblivious and innocent lives are being lost. The BJP government should take cognizance and carry out the rescue operation. Condolences on the deaths. The government should give a compensation of Rs 50 lakh to the relatives of the deceased, Rs 5 lakh to the injured and make arrangements for their treatment."

Mayawati conveyed her condolences to the bereaved families and asked the government to extend all possible help to the victims.

In a similar accident on the outskirts of the state capital recently, 10 people were killed and 37 injured when the tractor-trolley in which they were travelling overturned.