India   All India  02 Jul 2022  Modi speaks to Putin on trade; calls for talks on Ukraine war
India, All India 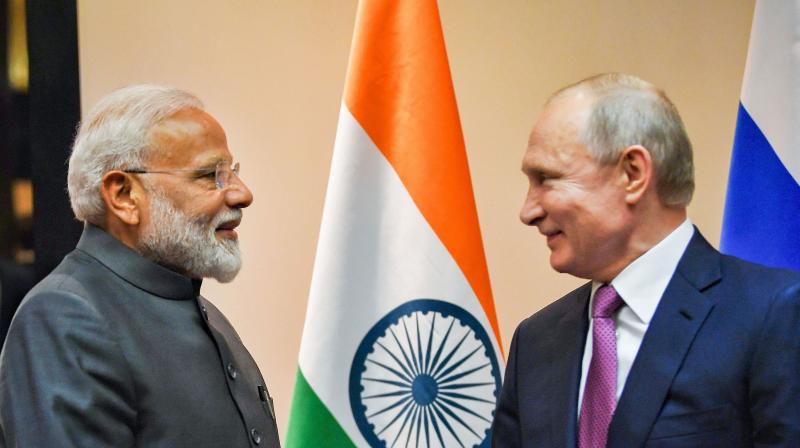 New Delhi: Prime Minister Narendra Modi on Friday spoke to Russian President Vladimir Putin, and reiterated the need for dialogue and diplomacy to resolve the Ukraine crisis, as New Delhi said both leaders discussed ways to enhance bilateral trade between their nations in agricultural products, fertilisers and pharma. Both also discussed the global energy crisis even as, according to global media reports, India is now importing huge quantities of Russian oil at discounted rates.

Russia, in its statement, said that “at the request” of Mr Modi, President Putin briefed him “on the key aspects of the Russian special military operation, emphasising the dangerous and provocative nature of the line of the Kyiv regime (Ukraine government) and its Western patrons aimed at escalating the crisis and disrupt efforts to resolve it politically and diplomatically”.

The leaders paid “special attention to further development of mutually beneficial ties in the economic sphere” and noted with satisfaction the significant increase in bilateral trade, including mutual deliveries of agricultural products, Moscow said, adding that “they expressed mutual intention for the comprehensive strengthening of the special and privileged strategic partnership between Russia and India”.

Saying the “current state of affairs in the global food market was touched upon as well”, Russia also said Mr Putin “drew attention to the systemic mistakes made by a number of states, which led to the disruption of the entire architecture of the free trade of food products and provoked a significant increase of their cost”, an obvious reference to the West and Ukraine. Further noting that “illegitimate sanctions against Russia have exacerbated an already difficult situation (and that) the same factors had a negative impact on the global energy market”, President Putin told Mr Modi that “Russia has been and remains a reliable producer and supplier of grain, fertilisers and energy carriers, including to the Indian partners”. Both leaders “agreed to continue personal contacts, as well as interaction at other levels”, Russia said.

The conversation comes amid increasing Western sanctions on Russia and days after the two leaders participated in the Brics virtual summit hosted by China. Russia indicated that during the recent Brics summit, both leaders decided they would have the phone conversation soon.

The Prime Minister’s Office said: “Prime Minister Narendra Modi had a telephone conversation today with His Excellency Vladimir Putin, President of the Russian Federation. The two leaders reviewed the implementation of the decisions taken during President Putin’s visit to India in December 2021.  In particular, they exchanged ideas on how bilateral trade in agricultural goods, fertilisers and pharma products could be encouraged further.”