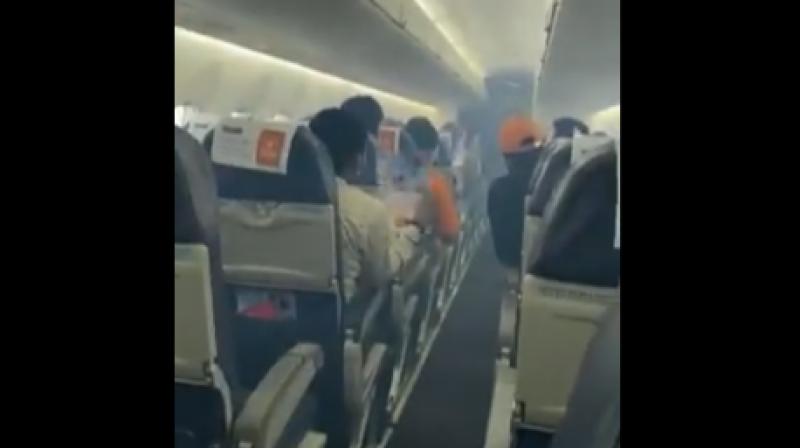 According to SpiceJet Spokesperson, smoke was detected inside the plane when the aircraft was passing 5000 ft. (ANI)

New Delhi: A Jabalpur-bound SpiceJet flight returned to the Delhi airport on Saturday morning after passengers claimed smoke in the plane.

According to SpiceJet Spokesperson, smoke was detected inside the plane when the aircraft was passing 5000 ft.

The SG-2862 flight which took off from Delhi at 6:15 am for Jabalpur, landed back at 7:00 am at the Delhi airport. The flight landed safely and deboarded all passengers.

"On July 2, 2022, SpiceJet Q400 aircraft was operating SG-2962 (Delhi-Jabalpur). While passing 5000ft, the crew noticed smoke in the cabin. The pilots decided to return back to Delhi. Aircraft landed safely at Delhi and passengers were safely disembarked," the Spokesperson said.

Saurabh Chhabra, a Delhi to Jabalpur passenger seated at 12C, told ANI, "Soon after the flight took off, there was a panic situation in the plane as passengers were having trouble breathing inside."

Earlier on June 19, a Delhi-bound Spice Jet aircraft made an emergency landing at Patna airport after there were reports of a technical glitch which prompted fire inside the plane. All the passengers were safely rescued.

"The Delhi-bound flight had returned to Patna airport after locals noticed a fire in the aircraft and informed district and airport officials. All 185 passengers were safely deboarded. The reason is a technical glitch, engineering team analysing further," said Chandrashekhar Singh, Patna District Magistrate told media persons.

During the takeoff roll, the Fuselage door warning light was illuminated. Subsequently, the take-off was rejected and the aircraft returned to the bay.

A similar incident was reported on May 25, certain SpiceJet systems faced an attempted ransomware attack that impacted and slowed down flight departures.

Later, the IT team contained and rectified the situation and flights are operating normally.

On May 4, SpiceJet flight SG-331 operating from Chennai to Durgapur on May 3 returned back to Chennai after take-off due to a technical issue. The aircraft landed back safely.