In a veiled reference to the Ukraine war, Modi said his 'visit to Europe comes at a time when the region faces many challenges and choices' 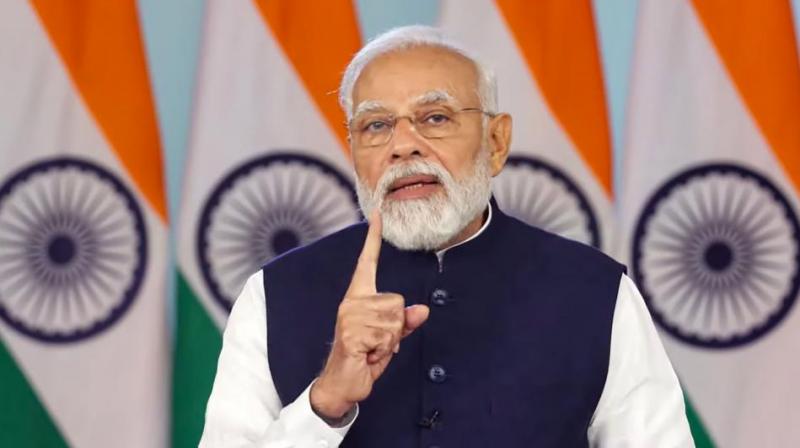 New Delhi: Prime Minister Narendra Modi’s “intense” three-nation European trip from Monday to Wednesday -- where he will visit to Germany, France and Denmark -- will be an opportunity to strengthen ties with Germany, the five Nordic nations and France and will also see an exchange of perspectives on the Ukraine issue, India’s new foreign secretary Vinay Mohan Kwatra said on Monday.

Speaking at a special media briefing on Sunday hours after taking charge as foreign secretary, Mr Kwatra said India stood for the “cessation of hostilities” and a “dialogue between the two warring sides” in the war in Ukraine, and this position would be communicated to India’s European partners during the visit, which had a “substantial and comprehensive agenda”.

“Our position on Ukraine has been very clear. First, there should be a cessation of hostilities; second, a solution must be found out through dialogue and diplomacy,” Mr Kwatra explained, saying this has been clearly communicated to various countries.

In his departure statement on Sunday and in a veiled reference to the Ukraine war, Mr Modi said his “visit to Europe comes at a time when the region faces many challenges and choices”, and added that through his engagements, he “intends to strengthen the spirit of cooperation” with India’s European partners.

Mr Modi said he would visit Berlin on the first leg of his visit to Germany and co-chair the sixth India-Germany Inter-Governmental Consultations (IGC) there on Monday with German Chancellor Olaf Scholz, after which he would travel to Copenhagen on Tuesday and hold talks with Denmark PM Mette Frederiksen. Mr Modi will participate on Wednesday in the Second India-Nordic Summit along with the leaders of all five Nordic nations (Denmark, Norway, Sweden, Iceland and Finland).

On the way back to India, Mr Modi said he would make a brief stopover in Paris on Wednesday evening to meet his “friend” Emmanuel Macron, the French President, who was recently re-elected to a second term. Mr Modi said he would convey his congratulations in person to Mr Macron and reaffirm the close friendship between the two nations, while setting the tone of the next phase of the India-France Strategic Partnership. It must be noted India has a robust defence partnership with France that includes the acquisition of 36 Rafale fighter aircraft.

Mr Modi will be accompanied by three senior ministers to Germany, including external affairs minister S. Jaishankar and finance minister Nirmala Sitharaman. The foreign secretary said the IGC with Germany on Monday would have three strands -- foreign affairs and security, economic policy and trade ties, and finally cooperation on climate, green energy and sustainable development.

The foreign secretary talked about the “changing elements” of energy security, its impact on developing countries like India, the challenges in the sector and the mitigation of challenges. “I am sure this will constitute one of the elements in the overall discussions. But naturally one single item would not define what the structure of the discussions would be,” he said. The IGC will be followed by a high-level roundtable where Mr Modi and Mr Scholz will interact with top CEOs of both countries. Mr Modi will also address the Indian diaspora in Germany. Mr Scholz is due to host the Prime Minister at a private dinner.

On Tuesday, Mr Modi will hold talks with the Danish PM and discuss bilateral ties as well as issues of regional and global interest. The India-Nordic Summit on Wednesday with the five Nordic nations will focus on partnership in green energy, digital economy, trade tires, sustainable development and cooperation in the arctic region, Mr Kwatra said.

In his departure statement, Mr Modi said: “The long-standing commercial ties between India and Germany form one of the pillars of our strategic partnership, and Chancellor Scholz and I will also jointly address a Business Roundtable with the goal of energising our industry-to-industry cooperation, which will help strengthen the post-Covid economic recovery in both countries. Continental Europe is home to over one million persons of Indian origin, and Germany has a significant proportion of this diaspora. The Indian diaspora is an important anchor in our relations with Europe and therefore I will take the opportunity of my visit to the continent to meet our brothers and sisters there.”

Mr Modi added: “From Berlin, I will travel to Copenhagen where I will have a bilateral meeting with Prime Minister Frederiksen which will provide an opportunity to review the progress in our unique ‘Green Strategic Partnership’ with Denmark, as well as other aspects of our bilateral relations. I will also participate in the India-Denmark Business Roundtable as well as interact with the Indian community in Denmark. I will also take part in the 2nd India-Nordic Summit along with the Prime Ministers of Denmark, Iceland, Finland, Sweden and Norway, where we will take stock of our cooperation since the First India-Nordic Summit in 2018. The summit will focus on subjects like post-pandemic economic recovery, climate change, innovation and technology, renewable energy, the evolving global security scenario and India-Nordic cooperation in the Arctic region. On the sidelines of the summit, I will also meet the leaders of the other four Nordic countries and review the progress in India’s bilateral relations with them.”

Mr Modi went on: “During my return journey, I will stop over in Paris to meet my friend, President Macron. President Macron has very recently been re-elected, and my visit just 10 days after the result will not only allow me to convey my personal congratulations in person, but also reaffirm the close friendship between the two countries. This will give us the opportunity to set the tone of the next phase of the India-France Strategic Partnership.”