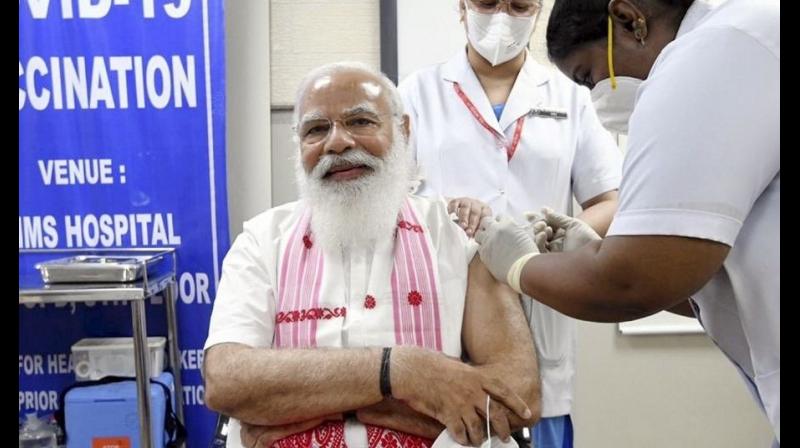 During his brief stay at the hospital, the PM chatted with the nurses and other staff and even cracked jokes with them. — PTI

New Delhi: The second phase vaccination drive to cover the general population above 60 years and those above 45 with co-morbidities began Monday with Prime Minister Narendra Modi and some of his Cabinet ministers taking the first dose of the anti-Covid jab. The 70-year-old PM took the first dose of the indigenously made Covaxin at New Delhi’s AIIMS to launch the second phase drive.

“Took my first dose of the Covid-19 vaccine at AIIMS. Remarkable how our doctors and scientists have worked in quick time to strengthen the global fight against Covid-19. I appeal to all those who are eligible to take the vaccine. Together, let us make India Covid-19 free!” the PM tweeted after taking the vaccine shot.

The decision to take the Covaxin shot by the PM was intended to quell the apprehensions and suspicion over the India-made vaccine as several Opposition leaders have questioned its safety and efficacy. The government has given emergency use authorisation to Bharat Biotech, which has developed Covaxin in collaboration with the Indian Council of Medical Research-National Institute of Virology.

“He took the Made in India Bharat Biotech Covaxin, vaccine and showed that both vaccines are safe and efficacious. We must come forward and take whichever vaccine is available. There has been controversy comparing one vaccine to the other, that has also been laid to rest today,” said Dr Randeep Guleria, the director of AIIMS.

Supreme Court judges and their family members will get the vaccine jabs on Tuesday. Health minister Harsh Vardhan also announced he will take the shot on Tuesday.

During his brief stay at the hospital, the PM chatted with the nurses and other staff and even cracked jokes with them. One of the nurses who administered the vaccine to him, P. Niveda, said the PM, after getting the vaccine shot, remarked: “Laga bhi diya, pata bhi nahin chala” (Already done? I didn’t even feel it).

Mr Modi also used humour to put at ease the medical staff during the inoculation and asked the nurses administering the vaccine whether they planned to use “some special thick needle” as politicians are known to be “very thick-skinned”, drawing laughter.

“When Prime Minister Modi arrived early in the morning, it was natural that the medical staff at AIIMS were perhaps a bit overawed”, a source said. Realising this, the PM instantly struck up a conversation with them, asking their names and about where they came from, the hospital staff said.

Nurse Rosamma Anil said: “The PM greeted us with folded hands, saying vanakkam, was under observation for 30 minutes after taking the Covaxin injection. Sir had no complications. He was very happy.”

The members of Opposition parties have questioned the selection of the two nurses who administered the vaccine. The Opposition believes it was not mere a coincidence the two nurses, P. Niveda and Rosamma Anil, are from Puducherry and Kerala respectively, both of which will hold Assembly elections soon. In addition, the PM was sporting an Assamese gamocha (scarf). Assam too is headed for polls, along with Tamil Nadu and West Bengal.

“PM Modi has this quality of sending a message from whatever he does… Our health minister has taken the vaccine, AIIMS director has taken the vaccine but the way it was presented with the PM taking it is if he is the only one who has taken it. He decided to wear a gamocha from Assam, and nurses who vaccinated him were from Kerala and Tamil Nadu (second nurse was from Puducherry). Coincidentally, there are elections in these states. If only he had carried Rishi Aurobindo’s photo and the Gitanjali, all five states would have been included,” said Congress leader Adhir Ranjan Chaudhary.

As the second phase of vaccinations began, the BJP has asked its leaders, including Union ministers and MPs, who fall under the category for the second phase, to take Covaxin shots, preferably in their constituencies, to build confidence among people to get vaccinated. The MPs and MLAs have also been asked to pay for the jab. In the second phase, vaccines will be administered free of cost at government hospitals and health centres. At private health facilities, the vaccine is priced up to Rs 250 per dose.

“PM Modi had clearly said that our Covid-19 warriors would be vaccinated first, and then us. To those who were questioning him, he has replied, ‘I was waiting for my turn’. We ministers have decided to avail of the paid vaccination facility,” law minister Ravi Shankar Prasad told PTI.