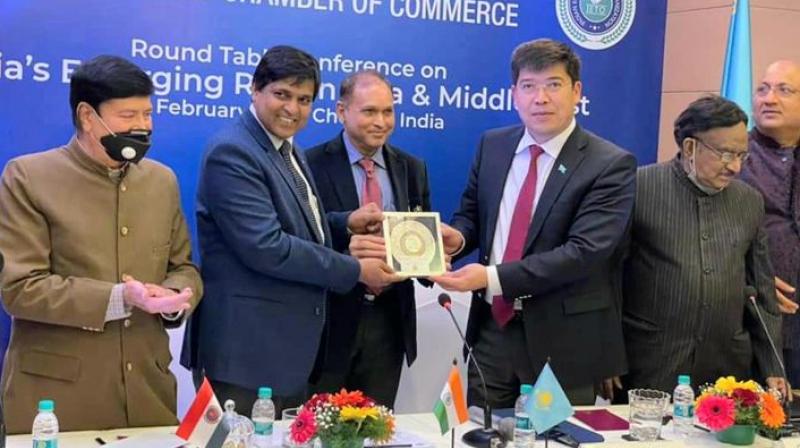 The office was inaugurated by the Ambassador of Kazaksthan His Excellency Yerlan Alimbayev and Consul Generals of Malaysia and Thailand in Chennai along with the President of the Indian Economic Trade Organization Dr. Asif Iqbal.

Indian Economic Trade Organization opened the ASIAN ARAB CHAMBER OF COMMERCE in Chennai which was inaugurated in Hotel Residency Towers, Chennai for building up business relations between both the countries of India and Arab Region.

The office was inaugurated by the Ambassador of Kazaksthan His Excellency Yerlan Alimbayev and Consul Generals of Malaysia and Thailand in Chennai along with the President of the Indian Economic Trade Organization Dr. Asif Iqbal.  “There is a huge interest in India as Arab countries are looking at India and Tamilnadu as the Investment Hub which is an emerging region having a great scope for multilateral business opportunities with its manufacturing base. Asian Arab Chamber of Commerce will open 14 trade offices in Tamilnadu and Kerala to facilitate Indian Businessmen wanting to do Trade in Arab countries. These offices are expected to work directly with various embassies in Delhi and bring opportunities to places like Hyderabad, Chennai, Bangalore and Hyderabad” said Dr. R.L Kannan the newly appointed National Director of the AACC in South India and Goa.

“Arab region and Middle East will be at the top of our priorities as per the Prime Minister’s Vision, through the chamber we will continue to intensify and deepen our engagement with Middle East which will be sustained and regular.  Our development partnerships will be guided by Arab priorities. and we will build as much local capacity and create as many local opportunities as possible. We will bring the South Indian market closer and make it easier and more attractive to trade with Arab region. We will support our Industries to collaborate with Arabian companies said the President of the Indian Economic Trade Organization (IETO) Dr. Asif Iqbal during the Inauguration.

“My goal is to build stronger multilateral relations and reach new heights between Tamilnadu companies and the Arab region which is a huge market and I will be focussing on the neighboring region that comprises 44 countries especially ASEAN and WANA region with a huge NRI population and we will explore the opportunities in a structured fashion as our family is one of the oldest families in Tamilnadu and we will support the Tamilnadu government ” Said Prince Asif Ali, who was nominated as the Patron for the AACC in South India. Certificate of Patronage was presented by the Ambassador of Kazaksthan and the President of the Indian Economic Trade Organization during the Reception Ceremony in Chennai to Prince Asif Ali who is the Dewan to the Prince of Arcot.

There was also a round table meeting that has been organized by the chamber in chennai with participation from Indian companies doing business in Asian and Arab region.

Monthly Round Table meetings are to be conducted with focus on different countries of Arab Asian region every month in Chennai, Hyderabad and Kerala with the support of Embassies in New Delhi for better cooperation which will be chaired by joint meeting of entrepreneurs and Embassy

“Kazaksthan relations with India date back several centuries and its relationship with India is directed by the historicity of their interactions – the century-old trade partnerships and socio-cultural linkages. We want to elevate our ties to the next level. We want to elevate our bilateral partnership; we can come to an agreement that we can elevate it to the level of strategic partnership. We want to have a dynamic and fruitful dialogue on bilateral and regional levels” said the Kazaksthan Ambassador Dr. Yerlan Alimbayev.

Shruti explains how influencer marketing is changing the marketing landscape

Why TDEE Calculator Is Essential To Stay In The Right Shape And Size?