One of the oldest music schools in India, Madras Music Academy was founded in 1928 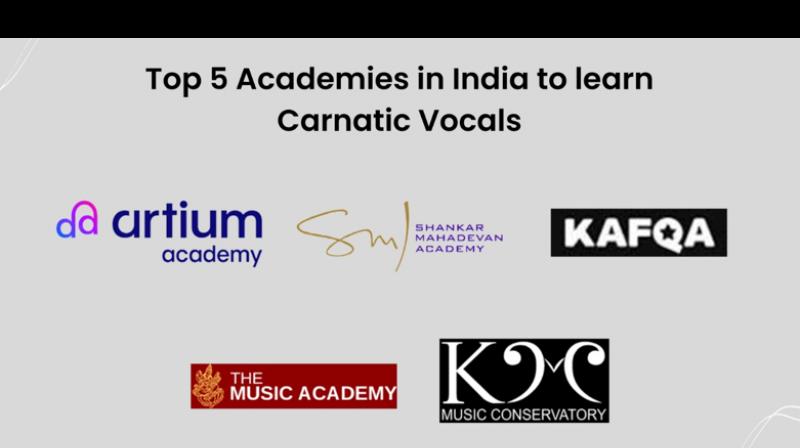 Based out of Mumbai, Artium Academy is an online music education platform that makes learning fun and accessible to people of all ages. — By Arrangement

India is home to numerous beautiful states with unique cultures vividly portrayed through their folk dance and music. Each state is like a fragrant flower with its special scent of culture and performing arts such as dance, music, drama and more, which adds to the beauty of Indian heritage. Many of these performing art forms are also popular worldwide. One such art form that enjoys immense popularity among the masses is Carnatic vocals and music.

Carnatic music, fondly known as Karnāṭaka saṃgīta or Karnāṭaka saṅgītam in southern dialects, is a symphony of music that hails from south India including the states of Karnataka, Andhra Pradesh, Telangana, Kerala, and Tamil Nadu. Popularised by composers like Purandaradasa, Thyagaraja and Muthuswamy Dikhshithar, Carnatic Vocals is one of two main subgenres of Indian classical music and is a divine art form derived from the Samaveda. It helps in developing hand-eye coordination in kids and also improves cultural understanding. The art of Carnatic music is vast, with major improvisations such as Alapana, Niraval, Kalpanaswaram, and Ragam Thana Pallavi. The medley of unique musical composition and singing style of Carnatic music entices the youth. The mesmerising notes of Carnatic vocals touch the soul of the listener.

Over the years, Carnatic vocals have carved a niche in the landscape of Indian music. The immense popularity of this musical gem from Deccan India has led to the establishment of various music academies.

Mentioned hereby are the prestigious musical academies specialising in the art of Carnatic music:

Kafqa academy was founded in 2020 in Bengaluru with the vision of art progression amongst the youth of India. Aptly named after the European author Franz Kafka, the academy is a popular choice among students who aspire to master the art of Carnatic music. With the belief that the contemporary world needs to be more passionate about art, Kafqa believes in the power of music.

Kafka Academy offers Carnatic Singing Classes for kids of age 6-14 in various batches online. With their zeal to propagate the rich legacy of culture by acquainting the youth with Indian Classical music, Kafqa academy is one of the finest institutes to learn Carnatic Vocals in India.

K M Music Conservatory was founded in 2008 by the A R Rahman foundation. The academy is a vision of the renowned music composer A R Rahman and is based in the heart of Chennai. Under the profound guidance of Carnatic music experts, pupils can opt for various diploma courses. KMMC is affiliated with Middlesex University in London. The academy houses a commercial & well-equipped recording studio. The music institute has extended its support to underprivileged aspirants through the in-house establishment of Sunshine Orchestra. KMMC offers a plethora of diploma courses in Indian classical & Western music.

Founded by famous music composer & singer Shankar Mahadevan, the academy provides learning sessions dedicated to Carnatic music along with other styles of music too. The founder of the academy, Shankar Mahadevan, is a visionary who believes in imparting knowledge on music through innovative methods. The institute aims to make the learning experience joyful for all its students across India. The advantageous access to online sessions is available to the aspirants. Shankar Mahadevan Academy provides well-devised courses on Carnatic music under the diligent guidance of expert mentors.

Music is a universal bliss. Any form and style of music brings a great deal of pleasure to the soul. Classical Carnatic music, with its enchanting notes, has its own appeal, which attracts a great number of audiences worldwide.

Based out of Mumbai, Artium Academy is an online music education platform that makes learning fun and accessible to people of all ages. The academy offers a diverse variety of courses in Carnatic Vocals and believes in training its pupils with such perfection so that they can grow into successful music composers, singers, etc. Their curriculum is performance-based and is designed by industry maestros and is taught 1:1 by Artium-certified teachers. Their Carnatic classes are headed by Aruna Sairam, who has trained in different forms such as improvisation, swara singing, gamakas and ragam-thanam-pallavi. Bestowed with the Padma Shri in 2009, She was the first Carnatic Classical vocalist to perform at the BBC Proms in 2011 at the Royal Albert Hall in London. The institute believes in a disciplined learning environment under the virtuous patronage of its learned and seasoned mentors.

Successful leaders and their new year resolution and plans for 2023