26 May 2022  Will the Yellowstone Supervolcano Ever Erupt?
In Focus

If it were to erupt, the impact might be felt all over the world 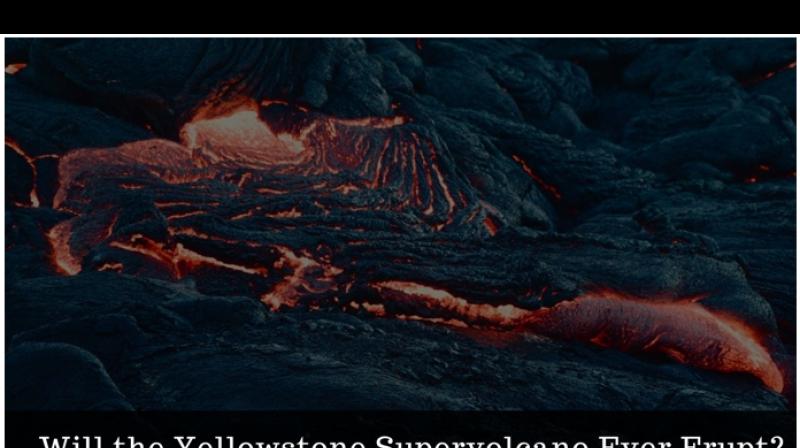 Even if the human lives are rescued or don't get affected very badly, the economic repercussions of such a devastating event will be extremely drastic. Finally, there will be an effect on the global climate. — By arrangement

Volcanoes are scary. This is easily understandable since they have exhaustively studied, scientifically researched and historically observed reasons to be. Freaks of nature, these gaping mountain mouths literally spit molten earth metals out into the open, exposing the wildlife and humankind in the near and sometimes not-so-near vicinity, to an imminent threat of extinction. There are layers to the destruction that volcanoes bring about. When a volcano erupts, it's not a simple, single method that they wreak their havoc with. The first one of the explosive eruption, blowing the lava into the sky and showering it down on the earth all around it. Then comes the lava flow, slowly but surely creeping into the settlements.

To top it all off, there is the enormous amount of ash that eventually pours down over vast areas of land that can adversely affect the climate, and more importantly, the crops. And it's not just that but also the medical perils it will bring about. The small particles would be deadly for the lungs. They can clog up the engines as well as collapse rooftops. Now, knowing all that the volcanoes can do, here's a bit of a bonus shocker; even the biggest volcanoes dwarves against nature's biggest bad boys called "Supervolcanoes". One of the largest Supervolcanoes in the world — the Yellowstone Supervolcano — has become a subject of great curiosity, attention, and concern.

Many people fear that it is going to erupt soon, or that it can erupt at any time. But, will it?

Yellowstone Eruption — The Questions and Possibilities

Although Yellowstone remains a hot topic of worry for many, there exists a clear explanation of why it won't erupt any time soon, if at all. However, just for curiosity's sake, what if it did erupt? What will be the likely scenario in a hypothetical realm such as that? What unimaginable havoc will it greet humanity with? Will it bring about the end of the world as we know it? Or will it turn out to be a dud and undo all the hype it has gathered over the past few years? Let's dive into all of that.

What Happens if Yellowstone Erupted?

Well, if Yellowstone did actually erupt, there will be causes for concern. You see, if it were to erupt, the impact might be felt all over the world. The most proximate areas will be the worst victims of the destruction. There will be your regular post-eruption calamities, including lava flows, earthquakes, toxic gases, and pyroclastic clouds, just to name a major few. However, what's especially concerning about this is that all of these impacts will be cranked to an eleven since it's a supervolcano eruption.

What are the Chances?

Chances range from unbelievably thin to almost none when it comes to the survival of any humans nearby the park. Then there's the ash that will come pouring down. Some near states and regions will observe many centimeters of ashfall and even regions far away will see at least a few millimeters of ashfall. As discussed above, the ash will cause a lot of problems and dangers. Even if the human lives are rescued or don't get affected very badly, the economic repercussions of such a devastating event will be extremely drastic. Finally, there will be an effect on the global climate. A supervolcano eruption would bring down the global temperature a couple of degrees down the celsius scale.

Ease Up! Yellowstone, or any Supervolcano for the Matter, Won't Erupt

As devastating as a super-eruption like Yellowstone would be, it won't bring about the end of the world, as many media sources claim frequently. We are prepared for a supervolcano better than we ever were. Plus, with each passing day, we're only getting better. Our capabilities of forecasting and studying volcanoes are improving at an impressive rate. Numerous scientists regularly study volcanoes and supervolcanoes. And so far, the scientific consensus has been that Yellowstone won't be erupting any time soon and that it ever erupts at all. Volcanologists around the world have been saying that the chances of a supervolcano erupting ant time soon are incredibly small.

The United States Geological Survey has said that the chances of a Yellowstone super-eruption happening in the next few thousand years are exceedingly small. In fact, there's a possibility that the Yellowstone might not erupt ever again. Here's another numerical figure to ease your mind on the Yellowstone fear. Given the history of the Yellowstone eruptions, there's a 0.00014 percent chance that an eruption occurs at the park in any given year. That's a stupidly small chance, even smaller than that of an asteroid wiping us out. So there you go, Yellowstone Supervolcano won't be erupting any time soon. Even if it did, there's a long time before that happens.