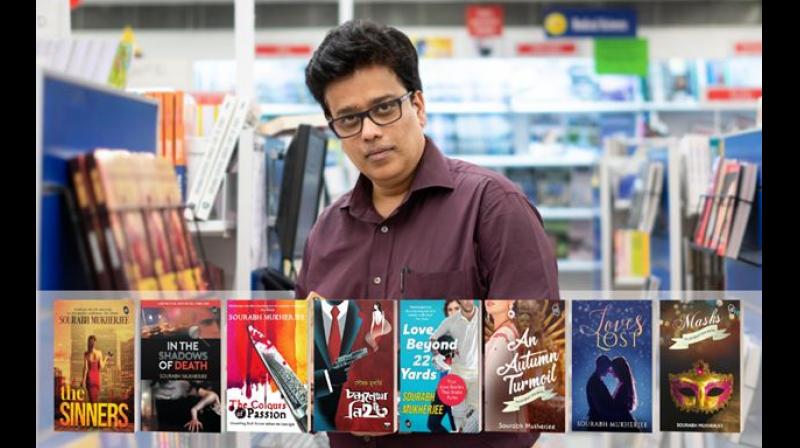 “My friends were surprised when they heard that I had published a novel! However, writing is a passion that allows me to unwind. Sometimes, stories have developed from the thoughts I pen down at airport lounges or on long flights,” says corporate honcho Sourabh Mukherjee, who while working in a Senior Leadership role in a large global technology consulting firm, has emerged as one of the most popular writers of Indian crime fiction over the last few years. With popular novels like In the Shadows of Death, The Colours of Passion, The Sinners, and his most recent bestseller in Bengali Chandralekha Nihato lapped up by readers, Mukherjee has definitely left his mark on the genre.

Mukherjee has been writing since childhood. “I wrote for school and later for tech magazines, but fiction, especially stories on relationships, is what I yearned to write. In 2014, I jumped headlong into it and wrote wherever and whenever I found time. Today, I write every day. It hones my art.”

“As a reader of crime fiction, I love to delve into the dark recesses that exist in our minds. When I write, I try to explore the same territory,” says Mukherjee. With an almost Freudian understanding of the human psyche, Mukherjee’s novels paint a stark picture of urban life in India. He attributes his detailed observations of human behavior and the complexity of human relationships in his novels to a keen interest in psychology.

Mukherjee’s first novel In the Shadows of Death explored the theme of sexual harassment of the male child in the confines of the home and the sexual exploitation of men at the workplace. His second novel The Colours of Passion unraveled the darkness behind the glitz and glamour of the entertainment industry. The book addresses the issue of alternate sexuality. His third, The Sinners, was a corporate thriller in the true sense with elements of corporate espionage, high-stake dealings, honeytraps, and professional rivalries. In 2020, Mukherjee published his first Bengali thriller Chandralekha Nihato (Chandralekha is Dead). In the garb of a murder mystery, the book is a stark commentary on the film industry, especially the politicization of the same, and issues like sexual exploitation and substance abuse.

Mukherjee, thus, belongs to the rare breed of Indian authors who have published both in English and his native language.

Mukherjee’s versatility is not restricted only to languages. In addition to his popular thrillers, Mukherjee regularly publishes collections of unconventional – mostly dark – short stories as e-books for readers looking for a short impactful read. His popular books are Loves Lost - a collection of five love stories, an e-book series titled It’s All About Love – a collection of 7 books titled The Gift, The Cookery Show, and a Love Story, A Special Day, Masks, An Autumn Turmoil, The Hunt, The Death Wish – and an e-book series titled Beyond 22 Yards on stories of Love and Crime from the world of cricket. All his short stories have been adapted into audiobooks by Amazon Kindle. “I love to delve into the dark recesses that exist in our minds. When I write, I try to explore the same territory, and end up creating stories that can fit into different genres,” says Mukherjee. He has also contributed to an anthology of horror stories published by Readomania.

How can a technology leader working for more than two decades not write about the niche and emerging technology? Mukherjee is also the author of an immensely popular textbook titled Big Data Simplified, published by Pearson, the largest education services company in the world, that blends technology with strategy and delves into applications of Big Data in specialized areas, such as Data Science and Internet of Things (IoT).

Mukherjee has two English thrillers and a Bengali collection of short stories lined up for release.

You can find out more about Sourabh Mukherjee at his website: www.sourabhmukherjee.com