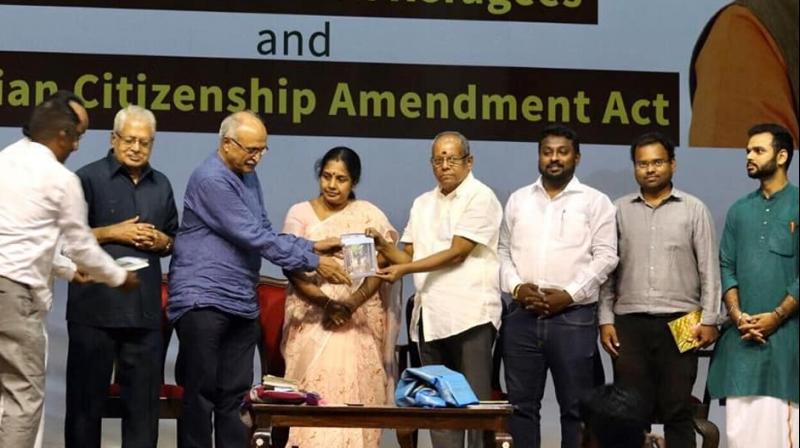 The book consisting of 7 essays, 6 of which are written by Prof. V. Suryanarayan elaborates on the plight of refugees tracing the historical, social and political origins of the conflict in the island nation to the contemporary challenges that they face.

The end lines of the book ‘Sri Lankan Refugee Crisis: Perspectives’ from Chennai’ is a poem by Benjamin Zephaniah that captures the essence of what the book tries to convey.

We can all be refugees

All it takes is a mad leader

Or no rain to bring forth food,

We can all be refugees

We can all be told to go,

We can be hated by someone

The book consisting of 7 essays, 6 of which are written by Prof. V. Suryanarayan elaborates on the plight of refugees tracing the historical, social and political origins of the conflict in the island nation to the contemporary challenges that they face.

This book was released at a time during the shrill debates surrounding the Citizenship Amendment Act that was happening across the country. While the opposition political parties opposed it on the pretext of excluding Muslims from the Act, political parties from Tamil Nadu opposed the bill primarily for the reason of excluding Tamil refugees from Sri Lanka.

A solution to this 3 decade old problem should attempt to effect a life change for these people, who came to Tamil Nadu as refugees and stayed inside and outside of camps. For this, the issue has to been seen not just as a political issue central to Tamil Nadu politics but also Indian foreign policy.

There is no doubt that the impact of these articles will be greater on the Government of India working with the Government of Tamil Nadu to implement solutions to the problems, especially as Prof. Suriyanarayan in his article on Sri Lanka-India Relations puts forward the notion of R2P: Responsibility to Protect.

Prof. Suryanarayan's views that come in these articles are based on his extensive research work in this area and incorporate historical events, international policy requirements and people's rights.

He makes a strong case for the inclusion of the Tamil refugees in the Citizenship Amendment Act, while aptly highlighting the plight that the refugees are voiceless people living amidst fear and optimism.

Prof. Suryanarayan in the chapter titled ‘Sri Lanka – Not a Theocracy?’ highlight the fact that Sri Lanka is theocratic state just like the three Islamic neighbours of India where Tamils are not placed on an equal pedestal, thus making the Tamils who had come to India as refugees as ‘religiously persecuted people’.

However, the sixth chapter named ‘Why were the refugees from Sri Lanka excluded from Citizenship Amendment Act?’ written by Pradeep Gunasekaran, S. Kaushik and S.G. Suryah sheds light on the legal and constitutional nuances of including them as part of the bill and how it would mete out injustice to the true cause of the refugees – repatriation and reconciliation.

As rightly pointed out by Suryah, Pradeep Gunasekaran and Kaushik in their chapter, politicians, especially MPs and MLAs should understand the real aspirations of the people and not resort to posturing.

They make it very clear that the Central Government's circular dated 21 November 2007 should be withdrawn for the refugees to get citizenship which they can get even without being including as part of the CAA 2019.

There is no doubt that this effort to come out with a policy brief will bring about positive changes that will promote human dignity and human rights, especially the rights of refugees.

Rarely do we see rich and insightful policy briefs produced from this part of the country and the fact that Tamilagam Research Foundation has made an effort to bring out such policy briefs for steering a well-informed public discourse is truly appreciable.