Ustad lets his sitar do the talking

I feel there is no science without art, and no art is without science. I felt it’s the same with sur and taal, they are not separate from each other. 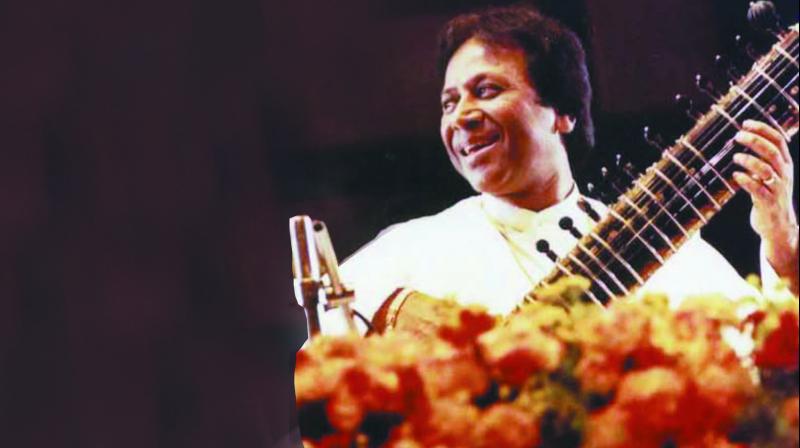 Ustad Shahid Parvez cuts a dapper figure; with his impeccable Urdu, and courtly manners, he has the bearing of an older generation. Quiet, keeping himself to himself, he prefers to let his sitar do the talking. The sixth generation musician in an unbroken line of the original sitar playing family of India, the Ustad is the grandson of the great surbahar player Ustad Wahid Khan, and nephew of Ustad Vilayat Khan.

Indeed, as a lineage, it cannot get better! He is distinctive in all that he does – from not sticking strictly to the music tradition he inherited, to performing many jugalbandis with his peers and even juniors. He has a surprising lack of ego considering his stature as an instrumentalist; he also has the unique distinction of having a huge array of concert playing disciples, including his own very dexterous son Shakir Khan.

It was a pleasure to chat with him on a variety of subjects.

Khan sahib, thank you taking the time to meet me. It is said you give very few interviews. Why is that?
I find the type of questions I am usually asked, irksome. Who is in my family, what type of food I like, what movies I watch….. these are futile, I feel. Ask me questions that are linked with my subject, music. If you are talking to someone who has achieved something in a certain subject, why not stick to that subject? Even if the interview reading, or listening audience is not familiar with my work, maybe what I have learnt during my many years of steady pursuit of music will touch a chord somewhere and inspire someone? To talk to me about my subject is of use, I feel.

I have heard there was a lot of pressure on you to become the artist you are. Your comments?
One has to work hard to achieve excellence. I belonged to a great musical tradition, I was the only son amongst sisters, so yes I was expected to learn music, which I did. You hear of bathroom singers, but you can never have a novice instrumentalist!!! It requires a great degree of dedication.

Khan sahib, in a sense you have been a pioneer amongst your gharana, in doing different laya work. Your views?
Lots of people used to say to me your gharana plays compositions only in teen taal; this thing rankled. After all, we are the pioneers of “khayal ang, gayaki ang” (vocal aspect) in tantrakaari (instrumentalist technique) —  vocalists in fact very rarely sing in teen taal! Most vocal khayals, specially vilambit, (slow) are in jhumra, tilwara, ek taal. So why should our compositions be limited mainly to one taal.

Another way of explaining my view point is, I feel there is no science without art, and no art is without science. I felt it’s the same with sur and taal, they are not separate from each other. I was drawn to laya, no doubt. Ustad Allah Rakha sahib, and Carnatic layakaars influenced my views on laya. Pt Suresh Talwalkar and I are friends; I have taken from him too. I have no hesitation in saying that amongst musicians, to take from the other, is the greater virtue!

My vaalid, (father) my Ustad taught me, that yes in sitar we may be the best, but music does not end with us and our gharana. (“beta, ye to sach hai sitar hamare jaise kahin nahi bajega, ye kabhi nahin sochna ke music bhi yahin khatm ho jaata hai). It’s not necessary that a great sitar player is also a great musician. These two things are different.

He taught me that one has to seek music from everywhere, I was encouraged to hear all music. The greatest music influences in my life were undoubtedly Ustad Vilayat Khan, (my uncle) Bade Ghulam Ali Khan and Ustad Amir Khan. But even someone like Pt. Ravi Shankar, a man who in such a short time achieved so much, reached such heights – definitely he was worth emulating. He could not have achieved what he did without great merit. One has to see the good one can. I have never compromised with my music; I feel that if one plays with great sincerity the “asar” (influence) of that will reach my listeners, even if they don’t understand music. “Dil ki awaaz har jagah pauhunch hee jayeegi” (heart felt music will be felt). Today I feel that when musicians meet, they don’t discuss music, I find it’s sad.

For a time, in the 1990s you did not play the traditional compositions of your family that much. Any reason?
Let me give you an example – Ustad Inayat Khan sahib made his own gats; he did not only play Ustad Imdad Khan’s gats. He could not have become Ustad Inayat Khan unless he had not done this. In the next generation, Ustad Vilayat Khan too made his own gats, he did not only play his father and grandfather’s!! So in each generation there have had to be innovations made; “main bhi kaise banta agar mein na karta”. (How could I have become Shahid Parvez otherwise) I too had to establish myself as a musician by playing my own compositions, it’s inevitable. Of course the intricate and extremely difficult gats of my elders are always there; they are signature compositions (Ye hamari pehchaan hai”, these are what give us our unique identity as musicians) and from time to time I play them.

You now live in Pune. Why?
I was born in Bombay, but my father worked in various institution, so we moved to Delhi even Calcutta, then moved back to Bombay. When I lived there, I used to travel quite often to Pune, often once a week, as I had many disciples. I liked the nice weather and the great musical atmosphere, at that time there were the great Bhimsen Joshi, Vasant rao Deshpande…. For my children’s education too, Pune was a better place for school. I had no interest in the world of the Bombay film music industry, so there seemed no real reason to stay in Bombay. So I moved to Pune in 1990, and have been here since.

Ustad Shahid Parvez has an array of concerts coming up, amongst others – December 14 in Mumbai with the great Ustad Zakir Hussain Khan, December 24 at Harivallabh festival in Jalandhar, December 25 in Banaras, Bengal Foundation’s massive festival on December 27 in Dhaka, December 29 and the January 6 in Kolkata.