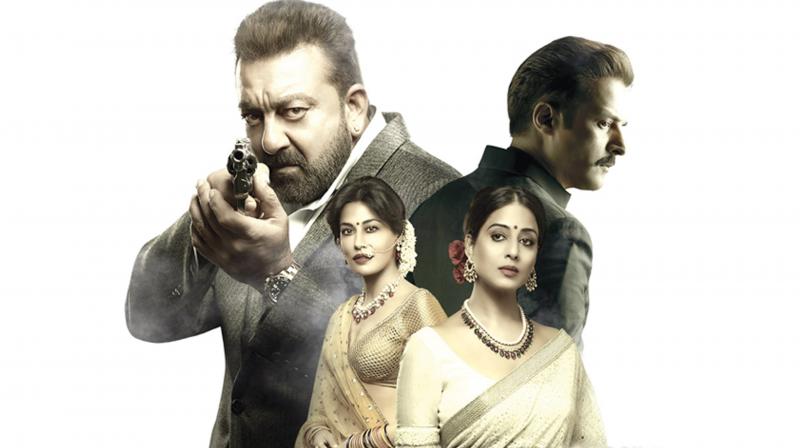 Not all gangsters are exciting. And one had safely assumed that writer-director Tigmanshu Dhulia knew this very well since he’s the one who gave us a dazzling goonda in 2011 (Saheb, Biwi aur Gangster) without whom the saheb and his biwi would have been nothing more than quibbling malcontents. Randeep Hooda’s Babloo made both of them pant.

It was because of the audacious raunchiness which Babloo brought to Deogarh haveli that Choti Rani held a gun while making out with the help in the open. That’s also the reason why we’ve since been happy to return to the saheb, biwi and their haveli.

But for out third outing the film, written by Sanjay Chauhan and Tigmanshu Dhulia, seems to have an ulterior motive vis-a-vis the gangster — not to try and spice things up, but to try and resurrect the bad boy image of Sanjay Dutt without actually making him do anything that’s morally wrong.

Uday Singh (Sanjay Dutt), an outcast from another royal family, is only peripherally a spanner in the works of Madhvi (Mahie Gill) and Aditya Pratap Singh (Jimmy Shergill).

He’s actually not at all interested in the sahib or his biwi. He stews in a parallel plot of his own making which is too clichéd and dull.

Because of this, Sahib, Biwi aur Gangster 3 operates not just in two places with two different sets of people and problems, but also at two sharply distinct IQ levels.

The haveli, which is now back to its splendour, is still the place where murders are easily plotted and assigned.

It’s a cunning, cerebral world of devious intrigue, while Uday Singh’s Boondi Nagar palace is a collection of heavily botoxed dimwits who are too inept to see through even a carefully planned, simple murder.

The film opens in London where Uday, wearing a hoodie, plays many rounds of Russian Roulette — a deadly game that involves vodka, ek goli in a gun that is passed from one man to another who try their luck by pulling the trigger.

Like his great grandfather, Uday is a master of this game. And so, soon after his opponents shoot themselves in the head, he collects wads of foreign currency, stopping only when he has enough cash to set up a nightclub, Lords of the House.

Uday, however, remains a character about whom we learn just few, basic titbits to establish that he’s morally sound, daring and unhappy married because he’s in love with another. Oh! And he also keeps maun vrats.

On one such maun day we watch him smash a bottle on a man’s head, and Madhvi, who is hanging around with her friends, makes note of his anger.

Uday skips with joy when he’s told that he’s being deported to India.

The thought of being with his mistress, Suhani (Chitrangada), are pleasing.

But there’s also his dad, Maharaj Hari Singh (Kabir Bedi), and brother Vijay (Deepak Tijori) who run their ancestral palace in Boondi Nagar as a hotel and want nothing to do with him.

Madhvi is now a powerful, confident MLA who runs the Jan Vikas Party.

She’s also a fixer, doling out favours in return for favours.

She also randomly picks up men but then forgets they are waiting for her in the guest room.

Her focus is on ensuring that Aditya Singh, who is in jail, remains there. And so she doesn’t flinch when she has to pull the trigger on someone rather helpless and sad.

Aditya’s old servant Kanhaiya has now been replaced by his daughter. But Deepal (Pamela Bhutoria), who arrives with promise, is soon reduced to a useless hangeron.

Uday wants money to buy property. Madhvi can help him get that, but in return she wants him to play one round of Russian Roulette.

There is a very filmy exchange in Saheb, Biwi Aur Gangster 3 which, dripping with in jokes that are kinda funny, doubles up as an open arm welcome to Sanjay Dutt into the free world, and Aditya welcoming him into his world of Rajwara intrigue.

And, every single time Sunjay Dutt is on the screen, the background score breaks into a rousing, filmy chant — “Aaya tera baap”.

But Dutt is too expressionless and lumbering. Though that fits in well with the people in his part of the world, it drags the film down to imbecile levels.

The film’s dialogue, especially the ones where people are insulting each other, are sharp and fabulous.

Chitrangada is gorgeous. And she’s a decent actor. But now that one part of her face is frozen into one, perpetual sexy expression, it’s unfair to expect too much from her.

But she is also a horrible dancer and yet we are subjected to a full song.

There are moments in the film, especially when Kabir Bedi is in the frame, which seem like we are watching one of those nightmarish, freakish videos about cosmetic surgery gone horribly wrong.

There wasn’t much expression or emotion in these faces at any time in the past, any way. And now that they are frozen forever, we have to rein in our expectations.

Ambitious and driven, they are mostly in pursuit of happiness, either through men or power, or both.

Often more than his men, they use guile, charm, chaploosi, sex to get what they want.

And over three films he has carefully honed the characters of Madhvi and Saheb to sexy sharpness.

As portraits of booze-guzzling royalty in decay, their humanity stripped down to the most basic instincts of survival and power grabbing, they are perfect.

They stand out, distinctly, and since they are channelled by two excellent actors, the suspense of what they will do holds the film.

Mahie Gill is just fabulous. Her Madhvi is like a glass of frozen martini whose rims have tiny, sweetened shards of glass. She lifts the film every time she is on the screen.

Mahie has the ability to up the temperature with her quick-changing mood. And here, in a cracking scene, she goes from mundane to tense to funny with lightning speed.

Jimmy Shergill’s Aditya Pratap Singh is always one step behind Madhvi. He’s slightly decent, but also puffed up on his own ego and significance.

He’s at once lonely, wasted and pitiable. But also delightfully narcissistic and self-serving.

When Saheb, Biwi aur Gangster 3 is with them, it rises. When it moves away from them, towards the single-note stars, it annoys and irritates.