In many Hindi films that try to be different, our heroes are either larger than life, or epitomes of perfection. 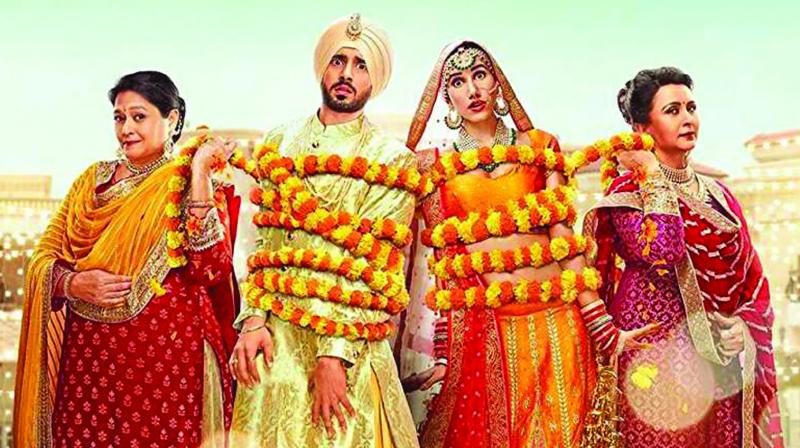 Jai Mummy Di is a story of conflicting dynamics between mothers of protagonists and how it affects them and their two respective families.
Rating:

In many Hindi films that try to be different, our heroes are either larger than life, or epitomes of perfection. Rarely, do we see a figure which is suffering, or sandwiched between his domestic/personal life and work, where the hero insubstantiates a broader representational shift. The last element is mostly seen in comedies, though. In the pure comedies of the 70s and 80s, situational entertainers made by some of the best known directors, Basu Chatterjee, Gulzar, Amol Palekar, Hrishikesh Mukehrjee, Kundan Shah, and later, many of Priyadarshan’s, Rohit Shetty’s and Raj Kumar Hirani’s comic capers had great scripts headlined by good actors.

Barring a few, not many among present-day filmmakers can hold a candle to the legends whose commitment to romcoms or just plain enjoyable comedies was exemplary. It’s, therefore, heartbreaking to see the genre gutted by clunkers that don’t quite hit the right mark.  This week’s only Hindi film release, Navjot Gulati’s directorial debut Jai Mummy Di is a story of conflicting dynamics between mothers of protagonists and how it affects them and their two respective families. But the film is less about love and more about two mothers. Failing to give us even a trace of humour, the film looks as though it has been written on the set without any thought as to what to do next!

Saanjh Bhalla (Sonalli Seygall) and Puneet Khanna (Sunny Singh) have a rather tough time dating despite being next-door neighbors. The reason is clearly spelled out right in the opening scene itself: Saanjh’s mother Pinky, or Bhalli (Poonam Dhillon) and Puneet’s mother Laali (Supriya Pathak), or Khanni, are at daggers drawn, and don’t spare a single moment to pick up a nasty fight with each other at the slightest given opportunity. So, the constant wrangling that culminates in a war of words begins and ends in their daily chores too. From throwing garbage at each other’s doors to losing their cool at the sight of seeing each other attending the same parties, the two ‘Mummys’ are at each other’s throats. Needless to add, if they can’t stand each other, they cannot fathom the very thought of their children mingling, let alone marrying. The two are in madly in love, but when it comes to settling down, it baffles you to see them become meek and submissive and turn into such wimps that they decide to get betrothed
to the choices of their respective parents, rather their mothers. The idea to elope does cross their minds but despite being bold and otherwise, they abandon such a plan only to please their families.

Sigh! Riddled with predictable and forced jokes, the film is wrapped up in too many clichés, and what could have been a light-hearted family comedy portraying a couple undergoing tribulations due to the dynamics between their mothers ends up becoming an inept misfire. While casting two veteran actresses both of whom were popular in their heyday adds some freshness, the director’s desperate attempts at eliciting laughter with egregiously silly scenes and failing to add some smart lines is so annoying that you wish you could walk out of the theatre. In one scene when the two lovers of the families decide to get to the bottom of their loathing, a flashback dating back to their college days reveals their being constant companions. And, as you wonder why on earth the two became sworn enemies, there is an absurd disclosure about a common love interest. What is even worse is that with no depth or proper character-graphs, the two veteran actresses’ one-note expressions touch an all-time low.

We settle for a 105-minute mom-com that gets the ultimate seal of failure right from the word go.  Between poor acting performances, inadequate script and comedy that simply doesn’t have a punch, many directors would find reason to abandon the form if more such scripts are being planned.