I only care about passion and talent: Ekta Kapoor

The producer talks about empowering women on the small screen, equality in the entertainment business and her upcoming web-series. 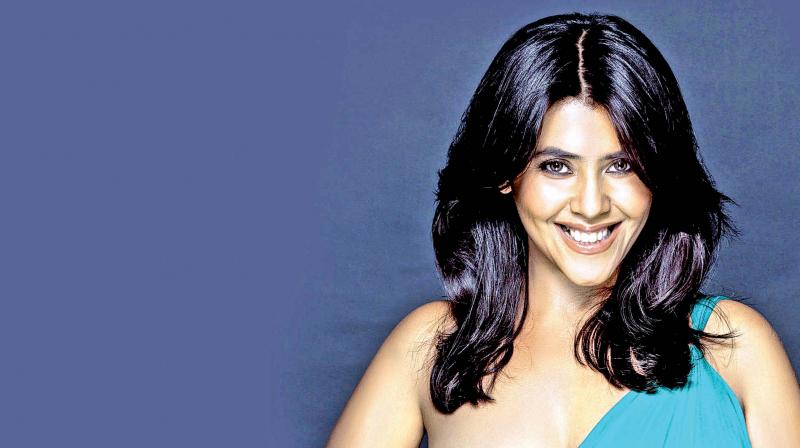 Ekta Kapoor, the undisputed queen of television of the early-2000’s, is the woman behind hundreds of successful television shows and the careers of some of TV’s biggest stars. The producer, who claims to have seen more downs than ups, says that she’s always trying to come up with new ideas.

“You need to work on constantly telling great stories in a great way, and some of them may work out in your favour. If I sit back and think, ‘Wow! What a beautiful show I’ve made,’ I’ll never be able to do it again. Whenever I’m launching a new show or movie, I have butterflies in my stomach. I always try to tell my stories passionately and hope that the audience will feel it. But there’s also a fear of failure,” she says.

This time, Ekta’s new launch is actually an old tale. She’s is all set to bring back one of her most popular shows, Kasautii Zindagii Kay, repackaged as a web-series for a new, younger audience.

Says the producer, “This show is not a sequel, it’s a reboot. It’s coming back after having completed its entire life cycle, and it will refresh the story in the minds of the audience.”

Ekta has symbolized the empowerment of women since long before feminism became a popular topic of debate, by thriving in an otherwise male-dominated space. She remembers how her father’s words, “either get married or do something worthwhile in life,” prompted her to embark on a career in television.

In her shows, she brought women to the fore and connected with home-makers across the country through their TV screens. “In those days, all films would be male-oriented. The story would have a hero, a villain, and a woman who would just dance around. Women didn’t have a voice of their own in films. That’s why I decided to make shows based on real stories that I heard from women. The protagonists and antagonists in all my shows were women. In those days, there was no one telling such stories, and that worked in my favour,” she says, adding, “Now, everyone’s following that same path.”

Talking about how it feels to be a woman in a man’s world, she says, “We are no longer just surviving, we’re thriving in this male-dominated society. I think we need not keep any gender differences in mind. As women, we need not be aware of our disadvantages, we need to know our advantages. We’re good at multi-tasking, we’re more tactful, and we believe in hard work. Let us take all these to be our advantages.”

“In the entertainment industry, we’re already treading on the path of equality. Everything depends on your talent. I never take into consideration the experience, gender, or age of a person while engaging his or her services, I only want to know about their passion and talent. In small towns, girls still have to face some unfair restrictions, but the day that gets sorted out, it will put an end to gender inequality,” Ekta adds.

What ticks her off is how women in the entertainment business are held to a different standard than men. “When we’re invited to attend an event, women have to take care of their attire, makeup, hair, nails and shoes, or else we get trolled. Meanwhile, men can just come out in their jeans and T-shirts. It’s too much for me to take time off work to go to the parlour and deck up. Does anyone ask Imtiaz Ali or David Dhawan about their attire?” she says.

The producer of the recently-released Laila Majnu has two films lined up for release next year – the Rajkummar Rao, Kangana Ranaut-starrer Mental Hai Kya, and the Sidharth Malhotra, Parineeti Chopra-starrer Jabariya Jodi.

She reveals that her biggest supporter is her dad, actor Jeetendra. “Dad always praises all my shows. He never dislikes my work. But I always take his praise with a pinch of salt,” she says.