Deepika and I have different taste in music, says Ranveer Singh

Ranveer Singh on his love for music, tasting success and living his dreams through the roles he plays. 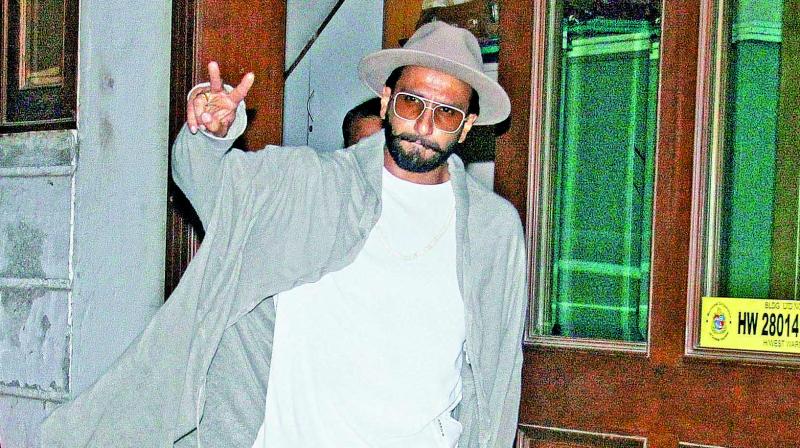 The year that went by has been fabulous for Ranveer Singh. This year too looks  promising. After the massive success of Simmba, Ranveer has been continously promoting his upcoming film Gully Boy that hits the silver screen this week. The film’s song Apna Time Aayega continues to be a chartbuster, we ask Ranveer if he feels his time has come. “My reward is that I have become an actor today. But, my time is yet to come. It is just the beginning,” pat comes the reply.

But it is indeed a good time for the 33-year-old actor who has been giving one massive hit after another. “My hard work has finally paid off. My philosophy in life has been to work hard and not expect anything. I go to the film sets every day and get a chance to show my acting talent. I feel getting to work with great artists and directors is a big thing for me. I am enjoying the process where I enjoy and learn. Kalakaar ban gaya hoon! (I have become an actor!) Whether the film turns out to be a hit or not, I must get the fulfilment of doing my best and every day, I am evolving,” says Ranveer while admitting that fame does come his way for being an actor.

While all looks gold at the moment, what were his struggles in the beginning? “Mumbai is a city – Mahanagri – where people come from all over the country with dreams and it's a struggle. But, I have been brought up here in Mumbai itself though even I had to struggle for three-and-a-half years before getting a break. I had just finished my studies and had returned from America and didn’t have a  job. Financially, every family goes through ups and downs... the recession had also set in but my hopes were never low. I just moved ahead and worked hard knowing fully well that my time will come,” says Ranveer.

The actor’s rapping skills have taken the nation by storm. The actor admits that he can’t sing but rapping is a different ballgame. “I can’t sing but rap is different and I can rap. I had a side skill to music that Zoya recognized in me as I am musically inclined. During my earlier days, I would read out the text inscribed on the cassettes in rapping style. Also, my friends would bring cassettes for me from abroad. I listen to music from the morning and always have music box by my side, especially when I am getting ready or travelling in the car.”

His first public rap was probably when he performed live on Simi Garewal’s show India’s Most Desirable in August 2011 but the actor has been rapping since childhood. “I used to mug up the songs of MC Hammer, Tupac Shakur, Eminem and rap. I was inspired by Tupac because he used to talk about his society and his language. I recognized his angst. It was authentic. My cousin would bring cassettes for me from the US when he would come for the holidays. My friends in school would call me ’Yo’.” When asked how different is their taste in music considering their personalities, Ranveer says, “Both Deepika and I like music. I like hard, angst and aggressive songs, which she doesn’t like but I like what she listens to… together we both listen to Coldplay and other popular songs.”

The actor would next be seen playing the legendary cricket Kapil Dev. Is he living all his dreams on the reel? “As a child, I wanted to do so many things. I wanted to be a rockstar, I used to practice in front of a mirror and would rap to some lyrics in the corridor. I also wanted to be a cricketer. We had a long corridor in our house and I used to bowl in that and now, I get to be all through my acting. Whatever I wished to be, now I am immersed doing it on the reel,” says Ranveer who will be bowling live at Lords soon and is the training process as of now. When the actor was asked whether he liked batting, bowling or fielding, he says, “Naturally, I am a batsman. I wouldn’t play if I would get out. I would take the bat and go home,” recalls Ranveer while adding that he was a good fielder in school days and even got an award for it.

Since he has no experience of batting, the actor feels that even though it is an altogether different experience, it is coming easier to him since he was a blank state.

The actor admits getting a kick from every film that he does and calls each a different trip but how does he take comments from critics and audiences. “Critics, public and everyone should like you and you should understand credibility and commerce. These days you get results so fast. We expected Simmba to do very well, like every Rohit Shetty film. Getting a good masala review from the audiences and critics both is something nice. Audience’s review is paramount for me. So, I went to watch the film 15 times with the audience to see their reaction,” he says.

The last year also witnessed not one but all the Khan-films failing miserably at the box office. We ask Ranveer how does he sees his success and whether Khans can be replaced. “I don't take ownership for success. Filmmaking is a collaborative effort and commercial success indeed has to be shared with the team. I am nobody in front of the Khans. I have just done a few films in the past eight or nine years that I have been in the industry. They are here for more than 25 years and they have sustained the industry for so many years. They are the core of the rising system in the industry and they have achieved a lot over these years. I don’t know if anyone can replace them. We cannot take away what they have achieved... it is so large that it seems almost insurmountable by any person,” says Ranveer and adds, “It is by chance that my films have done well, it can be vice-a-versa. Similarly, if their films have not done well this time, it will do well the next time. You can't take away anything from what they have achieved.”