Karan Johar, who has turned over a new leaf with the New Year, disappointed the media with reserved avatar. 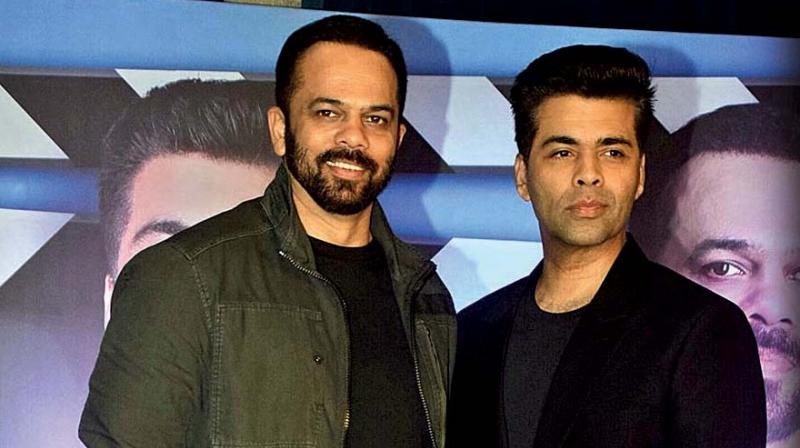 The usually chirpy, shutterbug friendly Karan Johar is on thin ice again. And he is going out of his way not to trip. Or shall we say, just go under?

Yes, the association is definitely with one Ms. Kangana Ranaut, who had, last year, rather unceremoniously rubbed his nose in his couch while purring that the director was the flag-bearer of nepotism.

A few rather embarrassing missteps later – remember the bole Kangana jibe at the IIFAs last year? – the director producer is today a very cautious man.

Particularly so since his upcoming TV show with Rohit Shetty has the tagline: “Naa khaandaan naa sifarish sirf talent” (Not family, not upbringing, only talent). Wait, what?

No wonder then Mr. Johar was extremely uptight before the media at a recent media meet to promote the show. He knew Ms. Ranaut’s ghost would surface sooner or later.

So he unleashed his entire PR machinery to vet questions directed at him at the event. Just like it is done in the dictatorial, iron-fisted regimes.

The strategy was quite novel. The reporters scribbled their questions on a chit, which were then collected by Karan Johar’s team and given to the host of the event, who read them out at his discretion.

There were no pre- or post-interactions either… nothing in which Karan Johar could be left at the mercy of a few spontaneous back and forths with the media.

Mr Johar’s new avatar is reticence. According to our source, all questions were scanned by the hosts beforehand since Karan wanted the press meet to go his way. The chits with questions that could have sparked any controversy were trashed.

A source said, “Having had an unfavourable time with the nepotism debate raging throughout the year, Karan pulled out all stops to ensure he wasn’t put in a spot. He knew the Kangana-nepotism controversy would be brought up once again. This is why the chit system was introduced.”

“Karan did not want to take any question on the nepotism subject lest the focus was taken away from the show he is promoting. In fact, he had also approved the list of journalists that were allowed to sit for the group interviews before the event took place,” informed an official on condition of anonymity.

On some insistence from the media, Karan finally chose a diplomatic answer to whether he would have Kangana on his show. “If the channel invites her to this show, I am sure we will be very happy to have her,” he said. He made it clear he will not invite her.

And then as is wont to his generous nature, he added: “Our hearts are big and our house is open and if we want, and if we send an invite to her, we will happily welcome her to the show with a lot of respect and love.”

Karan was on the defensive when asked if Kangana’s jabs ultimately led to the idea behind the show. “It is true that a lot of people want to become a part of the entertainment industry. This television show is a platform for people who have the talent but no backing,” he asserted, before wrapping up the press conference.

While Kajol has patched up with Karan, apparently due to the peace-making efforts of Shah Rukh Khan, Kangana is yet to see eye to eye with Karan, who could not handle her nepotism charge against him.

Well, for now, it is Karan na boley toh hi achcha hai! For him.

—With inputs from Sanskriti Media and Noyon Jyoti Parasara