Taking to his Instagram handle, Angad shared a picture of him 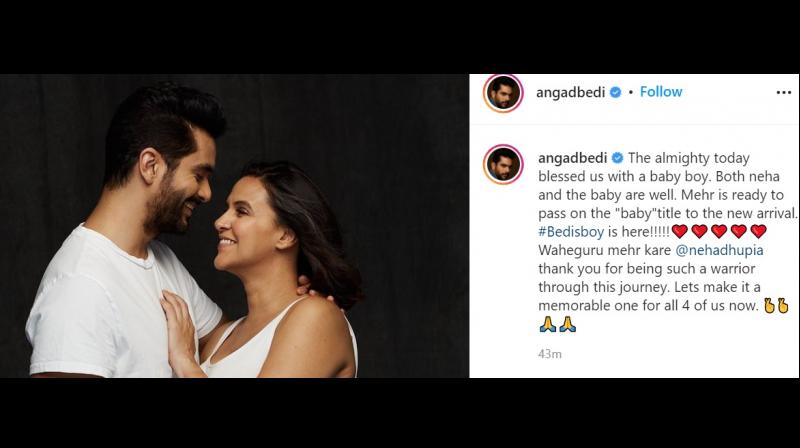 Angad announced the news and shared that both the mother and the baby are healthy. (Photo: Instagram/angadbedi)

Mumbai: Celebrity couple Neha Dhupia and Angad Bedi have been blessed with a baby boy on Sunday. Angad announced the good news through a social media post.

Taking to his Instagram handle, Angad shared a picture of him and Neha from a pregnancy photoshoot where the two are seen wearing classic white-and-blue outfits.

Along with the photo, Angad announced the news and shared that both the mother and the baby are healthy.

"The almighty today blessed us with a baby boy. Both Neha and the baby are well. Mehr is ready to pass on the "baby" title to the new arrival. #Bedisboy is here!!!!! Waheguru mehr kare @nehadhupia," he wrote the caption.

Fans and fellow members of the film fraternity poured in congratulatory messages on the happy post.

"Many many congratulations Angad and Neha ji," a fan added.

The couple announced the news of Neha's second pregnancy on July 19.
Neha and Angad got married in May 2018. They welcomed their daughter Mehr just a few months later.