AI has the power to learn, grow 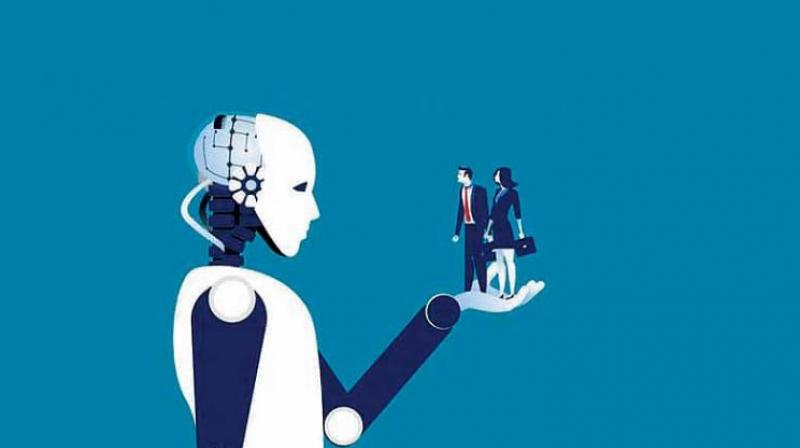 Recently a customer of ours brought an unusual request. They wanted our robot to find if a customer entering their premises was wearing a particular brand of suit or not. Like any good marketing company, they wanted to be able to identify and categorise individuals based on particular behavioural characteristics, then have our robots interact with them in a specific way based on the bucket they fit. While the technology challenge of this sounded interesting, it got me thinking what the future could hold for us. What if the Artificial Intelligence deepens our stereotypes rather than reducing them?

As the programs around us get intelligent, we have new risks that many of us might be unaware of. Facebook is one clear example where you can see the bias. If you have wondered why it looks like the world is following the opinions you hold, it is because Facebook gives you only that content which it thinks you would like. Your bias deepens rather than disappears by connecting to the world.

When the Americans originally envisioned of the Internet, they designed a robust distributed system that could survive a Soviet nuclear attack. However, in 2016 the Russians used the same power of the Internet and biased AI algorithms to manipulate the US Presidential elections. The Russians didn’t have to finger a missile or send a soldier. If you can manipulate elections in a democracy, you have the ultimate weapon in your hands.

Twenty-five years ago, when people dreamt of the Internet, they thought of an open system that allowed a diversity of opinions and one that would enlighten the masses. In 2018, we live in closed wells in WhatsApp, Facebook, Snapchat etc.,where the big companies serve us the ice creams we like and make us addicts, but not serve us the kale that tastes bad while doing wonders to your body.

Gender biases, too, get quite severe with AI. Think of the following example from Google Translate.

I translated a text from English to Hindi and when I translated back, it brought up gender biases. The lady became a nurse from a doctor, and the guy got upgraded to a doctor from a nurse. This is because when we translate from a gender neutral language to one with gender, the system has to guess what the appropriate gender might be. When it guesses, it uses its pretrained models where the man is more likely to be a doctor.

You can also try the translation with a variety of other texts with traditional gender roles and be amazed at how the system mimics the world with all its biases.

You might think it is funny and harmless. Given that these translations are going to help a generation of kids around the world learn with Google books and YouTube [those without English as the first language might turn on the translations] they might grow up with the biases we fought so hard against in our generation.

It is not like the people like me designing these algorithms and systems are evil. But, we often fall victim to our own biases. I’m sure the guys at Facebook and Google too didn’t design the system so that the National Security Agency (of the US), the Russians and other major powers along with businesses could take your data. However, by designing something so powerful without being conscious of its social implications, they can bring about great harm. Engineering teams often live in sheltered environments and pride on their power of logic. This makes them quite vulnerable to getting blinded by social biases.

As the algorithms get powerful and ubiquitous, our entire life might be at threat when the algorithms go wrong. Some cars are now driven by voice commands. Here is the kicker. If Siri or Google Assistant didn’t pick up your female accent you might not be alone. In general, many voice algorithms are trained more with male voice samples to train than female voices. What if you as a female driver is driving one of the cars and at the wrong moment the algorithm misinterprets your commands?

Speaking of Siri, Alexa and Google Assistant, you might notice that the popular ones all have female voices and they all take commands from primarily male users. The users can get a bit funny and abusive. Since the algorithms wouldn’t fight back, is it possible for a generation to grow up more with these voice assistants and be able to get away with abusing them all the time, before they have a chance to form deep relationships with their female human counterparts?

These might look futuristic, but I can assure you that these are not. Over the years I have been a part of multiple top companies in the US working primarily with data. And you might be amazed at how much the data says about you.

A few years ago, I ran a productivity app in the Bay Area of California [also called the Silicon Valley] that had access to large amounts of data of tens of thousands of people. A couple of investors approached me and asked to monetise the personal data we had. I had put my personal credibility in the app and thus walked out of the transaction. I was not able to run the company and had to quit it eventually. A few others might have taken up the deal, not because they are evil but they might underestimate the personal harm that might come to users selling their data.

While it hurts to say this and might hurt our financial fortunes a little bit, I believe we as a society need to evolve stronger policies that protects people’s data and build a win-win situation where users can both benefit from our technology and at the same time be able to protect themselves from powerful weapons we might be building inadvertently.

We need more social oversights on the data that companies collect. Like financial auditors, society must mandate large companies to get their data audited. We need to test them for biases that we inherit from society and these testing need not be any different from crash testing cars go through.

An unregulated free market is more harmful to itself than anyone else. Ten years ago, governments refused to regulate the toxic financial assets such as Centralised Debt Obligations (CDOs) and Credit Default Swap (CDS) and I had the misfortune of watching the entire action while visiting Wall Street for a bunch of interviews in investment banks I scheduled that week. The banks had way too much power, and the same should not happen to companies that operate with data. Nothing is too big to fail.

(The writer is the CEO of Invento Robotics, creator of Mitra Robot)