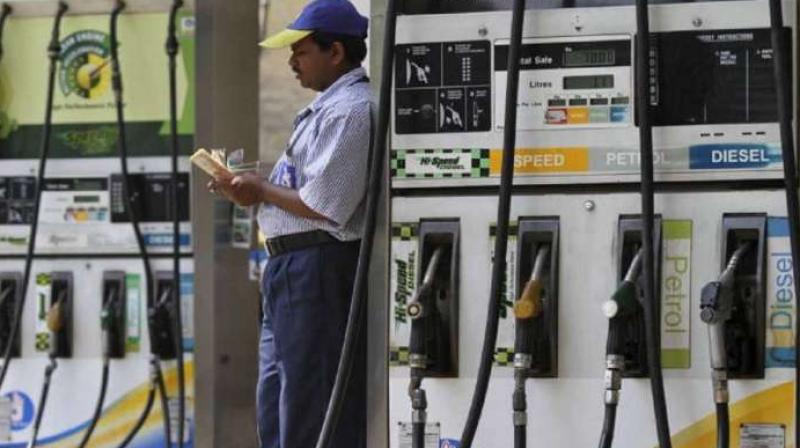 Petrol sales shrank by 15.5 per cent and diesel demand tanked over 24 per cent in March. (Photo- PTI)

New Delhi: India's petrol sales shrank by 15.5 per cent and diesel demand tanked over 24 per cent in March as the economy froze under the nationwide lockdown announced to check the spread of covid-19.

Also, aviation turbine fuel (ATF) sales fell by 31 per cent as flights got suspended alongside the shutting of businesses and most vehicular traffic going off-road.

Petrol sales dropped to 1.859 million tonnes in March from 2.2 million tonnes sold in the same month in 2019, according to provisional industry demand numbers.

The only fuel that showed growth was LPG as households rushed to book refills for stocking during the three-week lockdown period.

Industry officials said the pattern in fuel consumption is likely to continue in April as the lockdown is to last till mid of the month and there are indications that part restrictions will continue even after the lockdown is lifted.

Prime Minister Narendra Modi had announced a 21-day lockdown beginning March 25, shutting offices and factories, barring those involved in essential services. Also, flights were suspended and vehicles went off the road as most people were asked to stay home to help check the spread of coronavirus.

March will be the first month in two-and-half-years when petrol sales would see a negative or degrowth. The fuel had registered an 8.2 per cent growth during the first 11 months of 2019-20 fiscal.

Diesel has seen a 1.1 per cent rise in consumption from April 2019 to February 2020. It had seen sales slip into negative territory in January this year before rising in February.

LPG consumption recorded a de-growth of 4.3 per cent during February and a cumulative growth of 6.2 per cent in April-February.