The circumstance and pomp of magic

Zubrzycki focuses on magic and its derivates as entertainment, and has brought to life the history of the art in India. 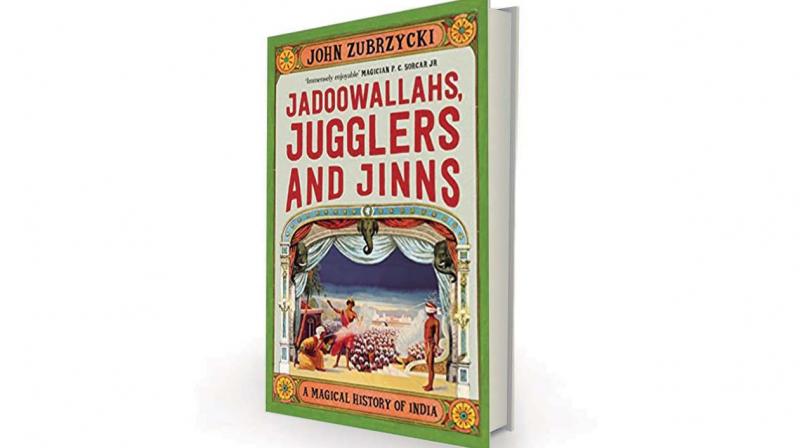 The arcane, the mystical, death-defying feats, a fascination with the macabre, the occult, illusions et al, the topic of magic is both varied and mysterious. Human fascination with things we cannot explain or are beyond the ordinary is an enduring trait. We wondered how the sun was hot and where rain came from. At first, religion began to explain these varied beliefs and gods and magic thrived. Then science came in, giving us logical proofs on why, how and when. But the mystical endured. Magic as entertainment has always been around because of the fact that one man can somehow do what the rest of us can’t, whether it is a trick, an illusion or a skill. Zubrzycki delves into the origin of magic in the “Orient” as it was known then. Jugglers, magicians, con artists, beggars, thugs, troupes, dancers, beast masters, acrobats and all their variants thrived in India of yore.

Jadoowallahs, Jugglers and Jinns is a comprehensive tell all on the history and practice of the art of misdirection and sleight of hand in India. All the little things we want to believe are possible to the things we know cannot be possible, the author showcases the ingenious minds of people who bedazzle and awed audiences around the world.

From the pomp and circumstance of the stage, the death-defying sword swallowers, the amazing levitating brahmins, the trapeze artists, the mysterious rope-climbing sadhus, the amazing contortionists and jugglers, the book is a treatise on the varied skills and trappings of the magical art in India. The breadth of research and thought that went into the book is astounding, and makes the work both extremely thorough yet easy to understand.

John Zubrzycki chronicles some of the adventures and travels of notable historic figures like Marco Polo in India, as well as centuries of court intrigue and speculation on magic, from Mughal emperors to Hindu maharajas to British viceroys all the way to the grand stage.

Particularly poignant is his description of the “strolling players”, travelling magicians from an Indian Maharaja’s court who showed up in England with no resources, but made their way by enthralling the English public with their “magic”. The entire chapter is almost an expose of the dark side of magic, the human trade that was lauded by the people of the time and their fascination with “exhibitions” which led to the evolution of the magic industry from what it used to be to what it is today.

Zubrzycki runs the gamut from Mohenjodaro’s sorcerers, to those at the court of Mughal Emperor Jahangir, to 20th century’s P.C. Sorcar and the eclectic legacy they left behind. In fact, much of the magic practised in England was “borrowed” from Indian magicians and illusionists. And through it all, the writer does not denigrate something that can easily be dismissed as the tripe of conmen. He accepts that the art of magic has a place in the world, and seems saddened at the loss of it.

Critical thinking and cold logic has its place, but the fascination and wonder that the mystery of magic brings to a disenfranchised world has its own value. His colourful descriptions of the oft-lauded Indian snake charmers and rope climbers, the portrayal of sagas led by fakirs, and the transition from turbans to top hats brings to light just how much the Indian magical menagerie influenced the world of magic as a whole. He draws us a picture of how religious practice and custom were used as inspirations for ingenious people to emulate.

Although the book does have a textbook vibe that some non-fiction books have, and doubly so since this is a treatise on magic, it is quite easy to read, and contains fascinating anecdotes not only from the world of magic but also society and politics of the time. He writes of kidnapped European girls and “thugge” bandits, competing magicians and rival illusionists, all attempting to one up each other to be seen as bigger and better. Emperors and kings, viceroys and governors, soldiers and criminals, fakirs and freaks all grace the pages of this saga of Indian magic.

However Zubrzycki does like to get on his soapbox, and pens some overly descriptive and unnecessarily detailed stories where the whole point of the narrative seems to be to explain how much research has gone into the project. Though not a bad thing, this does detract from the flow of the book a little as one slogs through these sections. Nevertheless, overall the book is a fine read.

Zubrzycki focuses on magic and its derivates as entertainment, and has brought to life the history of the art in India. Though a foreigner to the country, albeit one who is armed with degrees in Hindi and South Asian history, his experience as a foreign correspondent, tour guide and diplomat have stood him in good stead in his foray into the arcane.