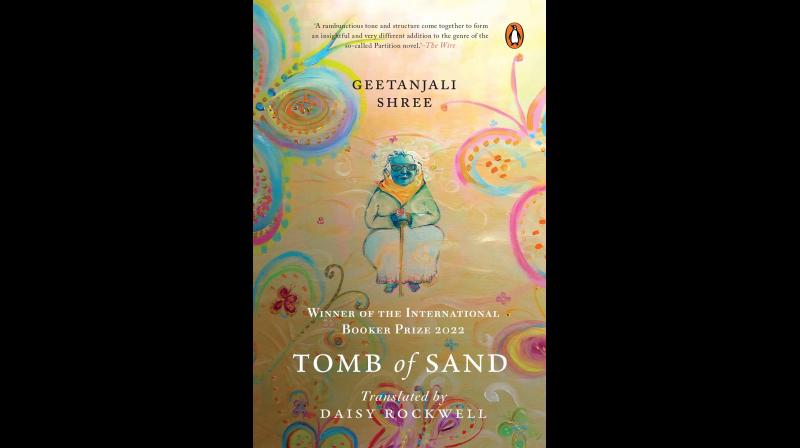 Coverpage of 'Tomb of Sand'. (Image By Arrangement)

What does one say about a celebrated novel? The translated tome of which is twice the size of the Hindi book? Which is priced like a pair of Bata footwear? And which translates “samadhi” as “tomb”? In the Indian spiritual realm, Samadhi connotes a state of self collectedness, an intense meditative state of someone who, while still in their body, is connected to the highest reality. It is actually another plane of existence and does not convey the finality of a tomb.

In fact, there are some episodes in the book imbued with samadhi-like moments. And the crucial one, in the sand, actually becomes a beginning, a rebirth if you will, of sorts. A debatable matter, perhaps. But there are other issues with the translation as well.

There is a beautiful phrase in the Hindi original, for instance which, translated well, would be taken to mean that the daughter’s youth had just begun while the mother had not yet lost hers. However, what has been prosaically rendered, and which does not quite convey the fine distinction is “Beti was growing up and Ma had not yet grown old”. Not growing old and not lost her youth may mean the same but does it quite convey that sense of overlapping youths?

Take another example: there is an account of a child frightened by something and starting to cry. The mother cradles her and tries to soothe her and the author tenderly describes how the mother becomes the “trembling lip”. So far so good with the translation. But then, when the original goes on to say how she then becomes the smile of the child and, finally when her daughter’s crying subsides into steady breathing, the mother too changes from sob to breath — the translator lapses into the mundane and says, ”And Beti smiled. And this made Ma smile too.” Where has that lovely merging of the selves of the mother and child in which the mother actually becomes the sob and the breath and the smile of her child, vanished? One could go on. But then, one must hasten to add that these jarring details will only jump out at the reader who can not only read both the versions, but is determined to do so precisely in order to see what the translation is like. For the reader who reads only the English translation, there is a flow of words and phrases as well as a felicity of expression that can be quite enchanting.

What does one say about a book that goes into interminable detail after detail, most often unnecessary and adding nothing to the story line? The case of the son who could not laugh, for instance. Or the large dollops of magical realism in which crows, partridges, the elder son Bade, all participate, to the utter bemusement of the reader (well, this one, at least). Oh, and the infernal lists! The surfeit of superfluous stream-of-consciousness information leaves one gasping for breath and trying to come up spluttering from the deluge to grasp the threads of the basic story. At one point, the author remarks, “Not the place to go into detail” — cut to hysterical and unbelieving laughter from yours truly. Rather unkind perhaps but what does one say about a book that meanders across 700 plus pages and bungs in so many things that could easily have been left out in the final editing?

There seems to be some sort of resolution on the part of the author to bring in as many elements — music, painting, philosophy, marital lives, mother-daughter relationships, India-Pakistan, the third gender... — as possible, not to miss a single chord that might strike the right note.

The sand passage is one of the most powerfully rendered in the novel. And the squabbles between Bade and his wife are just pitch perfect, as is the inversion of roles when the daughter looks after her old mother, alert to every sound even when she sleeps, much like a mother with her baby. And the dynamics of family relationships is brought out brilliantly with all its complexities, rivalry, tension and above all, the affection that underlies the inevitable conflicts of personalities, ideas and sometimes, sheer cussedness.

With all its moments, the book is a tedious read and it seems rather unfair to make the reader wait for the better of 500 odd pages for it to all come together. But if you have the patience, do keep reading for the reward is worth the wait and the wading through words.

Translated from the Hindi by Daisy Rockwell