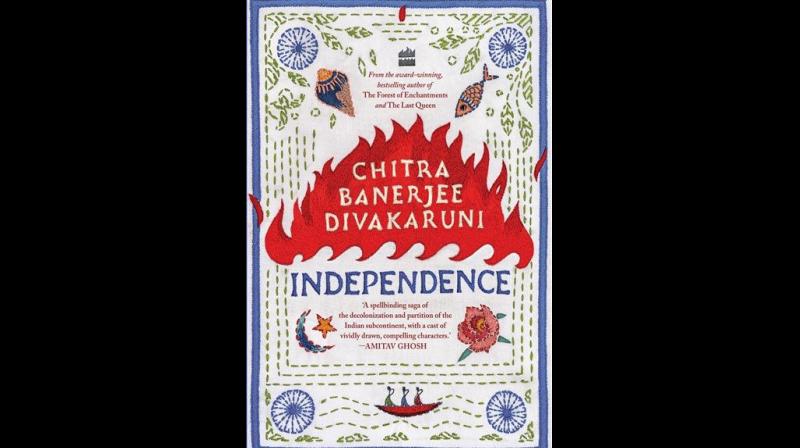 Chitra Banerjee Divakaruni’s transition from mythology to history has been felicitous. If her previous novel, The Last Queen, a first-person retelling of the life of Jindan Kaur, the youngest queen of Maharaja Ranjit Singh, was a pacy read, her latest, Independence, too is quick-footed and densely plotted. Set against the backdrop of the months leading up to India’s Independence and a few years thereafter, the novel gives a sense of the way lives were torn asunder in the upheaval of Partition, and seems to suggest that independence, even at a personal level, does not come without its share of pain.

Independence is the tale of three sisters — Priya, Jamini and Deepa — whose  sedate, uncomplicated existence in Ranipur, a village in Bengal, is shot to pieces when they visit Calcutta for what is meant to be a happy sightseeing trip, and get caught in the grisly communal rioting of August 16, 1946, or what was known as Direct Action Day.

But before that deadly day dawns, the trip promises to be full of romantic possibilities. Accompanying the sisters and their parents, Nabakumar and Bina, is Amit, the son of Somnath Chowdhury, the rich landowner of Ranipur and a dear friend of Nabakumar. Amit is in love with the bright and spirited Priya, the youngest sister, and has secretly proposed to her. But Priya, though not unwilling to marry him, wants to first study to be a doctor like her father.

Meanwhile, Jamini, the middle sister, is besotted with Amit and wonders if she can use the trip to get his attention. And Deepa, the eldest and the prettiest, gets seriously smitten with Raza, the nephew of Abdullah, Nabakumar’s partner at the clinic he runs in Calcutta — and the young man, also a doctor and active in the Muslim League, seems to be attracted to her as well.

But then catastrophe strikes. On the night of the rioting, Nabakumar rushes out to his clinic to minister to the injured and is felled by a stray bullet. The devastated family returns to Ranipur and suddenly find themselves on the edge of penury. The only possible source of income for them now are the finely stitched quilts that Bina crafts, and the sisters start going to Calcutta regularly to sell them at stores in New Market, the most upscale shopping centre of the city at the time.

Divakaruni is a consummate storyteller, and the plot keeps the reader engaged with new developments at every turn: Deepa elopes with Raza and though she does not convert to Islam, the couple pose as husband and wife and migrate to Dhaka, which will be part of East Pakistan post Partition; Priya fails her entrance exam at Calcutta Medical College (apparently because of misogyny),  applies to a medical school in Philadelphia, and is accepted; a furious Amit breaks off his engagement with her, refusing to wait till she completes her degree in the US and returns; Jamini, who has continued to secretly desire Amit, now sees her chance, and after she is sexually assaulted during a riot in the days following Independence, he agrees to marry her on Bina’s request.

The narrative focuses on each of the three sisters by turns, although Priya is clearly the central figure of the novel. Ambitious, yet sensitive and kind, she represents the modern, progressive woman of a newly awakened India. Jamini, on the other hand, is the very archetype of the old order, defining her womanhood on her ability to make a ‘good’ marriage — even if that marriage is loveless and hollow.

Jamini could easily fit the mould of the ‘evil’ sister, one who has no qualms about stealing her sister’s lover and given to unabashed emotional blackmail — she threatens to kill herself when Amit seems ready to go back to Priya. She and the mother, Bina, are, in fact, the most unsympathetic characters in the novel. Bina is implacable and retrogressive (she refuses to forgive Deepa for having eloped with a Muslim man), and Jamini, only somewhat less so.

Yet, though the sisters are so dissimilar in temper, when push comes to shove, they show up for each other. When a widowed Deepa is in danger of being forced to marry a local strongman in Dhaka, Priya and Jamini, with Amit’s help, rescue her in a dramatic, Bollywood-style operation, with gunshots ringing out all around and people in hot pursuit. One doesn’t doubt that the book will lend itself admirably to a screen adaptation.

Banerjee is adept at tying up loose ends and resolving the complications in her story. Independence is no exception to that. However, the sisters’ tale, though assiduously studded with seismic political events, remains, at heart, a prim domestic novel, streaked with melodrama, and never quite achieves the emotional heft to match the vast, convulsive historical action amidst which it is set.