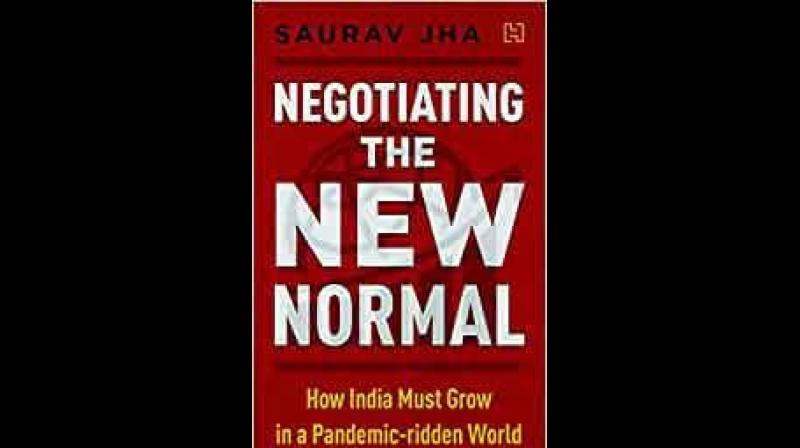 Cover photo of 'Negotiating the New Normal' By Saurav Jha (Photo: By arrangement)

While China may be the largest producer of scientific papers and has probably surpassed the US in overall R&D investment, it continues to lag behind America in key technologies such as semiconductors. Semiconductor chips are a major vulnerability for China’s electronics and telecom industry, given that only 16 per cent of the chips used are manufactured at home. The global semiconductor shortage that began in 2020 as a result of pandemic-related supply disruptions coupled with prior stockpiling by the likes of Huawei has only served to further underline this weakness. In order to reduce this obvious shortcoming, Beijing has announced a target of meeting 70 per cent of its requirements for semiconductor chips from domestic sources as a part of ‘Made in China 2025’. That is, however, easier said than done because even the advanced manufacturing processes needed to produce reliable and modern chips are subject to US control. From Synopsys, Inc. and Cadence Design Systems, Inc., which lead the market for software used to design semiconductors, to companies such as Lam Research Corp. and Applied Materials, which manufacture chipmaking equipment, the US footprint is literally end-to-end in the semiconductor space.

And then there is America’s geopolitical heft. In November 2019, a Dutch manufacturer of extreme ultraviolet (EUV) lithography machines withheld supplies to China’s biggest contract computer chipmaker, Semiconductor Manufacturing International Corp. (SMIC), pending a renewal or extension of a licence for the same from the Dutch government. Though the Netherlands denied it, it was well understood that US pressure won the day. In October 2020, Washington stepped up pressure on SMIC by restricting its access to accessories and raw materials by making licensing mandatory for any US firm looking to supply these items to it.

Even many high-end chips currently being built in Chinese foundries are subject to US sanctions, as Huawei-owned fabless semiconductor company HiSilicon found out in May 2019. HiSilicon, touted as Huawei’s answer to US sanctions, designs system on chips (SoCs) that have a CPU at their core developed by ARM, a UK-based company. Now after Huawei’s entity listing, ARM had to suspend links with HiSilicon since its proprietary designs contained US inputs. The company instructed employees to halt ‘all active contracts, support entitlements, and any pending engagements’ with Huawei and its subsidiaries to comply with US restrictions, and a company memo acknowledged that its designs contained ‘US-origin technology’.

Earlier, in October 2018, a $5.65 billion plant by Chinese company Fujian Jinhua Integrated Circuit Co. Ltd to build dynamic random access memory chips was essentially ruined when its Western partners suspended collaboration owing to US pressure, even before the plant had started production. So, even though China may have made great strides in recent years in developing key technologies and equipment for 5G communications, and produced technology services firms that have been able to innovate at a global scale, the fact remains that the US has a lead when it comes to the core technologies and subsystems that underpin this success. Even in the case of an arena such as machine learning, Chinese companies continue to depend on open-source platforms built by the likes of Google and Microsoft. In general, the US is ahead of China in terms of AI theory development, which underpins all AI-based applications.

Influence of the US over the supply chain for high-technology items was so great that Huawei’s much smaller rival ZTE was brought to its knees when it was put on the Entity List and had to come around to the terms imposed by Washington, which included coughing up a $1 billion fine for violating US sanctions on Iran and North Korea. Huawei, however, managed to weather the May 2019 entity listing better than ZTE. In the six months following the blacklisting, Huawei’s smartphone business registered some 24 per cent growth, with the company also claiming it had signed 65 commercial contracts to build 5G networks, with about half of these being in European countries. The head of Huawei’s 5G business claimed in November 2019: ‘The entity listing has had no impact on Huawei’s 5G equipment whatsoever.’ And: ‘The performance and specification of the products with our own components will only be better.’

Apparently, Huawei had diversified its supplier base enough such that it had managed to supply 3,00,000 5G base stations since its blacklisting — accounting for around 75 per cent of such units supplied in the course of 2019. Huawei also introduced the ‘Mate 30’ smartphone in November 2019, which was completely ‘de-Americanized’ as far as its hardware components were concerned. These developments seemed to be in keeping with Huawei founder and CEO Ren Zhengfei’s comments in the immediate wake of the May 2019 blacklisting, when he stated, ‘The US is helping us in a great way by giving us these difficulties. Under external pressure, we have become more united than ever. If we aren’t allowed to use US components, we are very confident in our ability to use components made in China and other countries.’

Indeed, the Chinese seem to be using the trade war to galvanize themselves to pursue the Made in China 2025 goals more aggressively. Self-sufficiency has understandably emerged as a popular theme, with even Alibaba founder Jack Ma saying in 2018,‘If we do not master the core technologies, we will be building roofs on other people’s walls and planting vegetables in other people’s yards.’

While the drive to attain technology independence is an admirable goal, the reality is that substituting high-end US imports will be a rather time-consuming and expensive proposition, as China will have to reinvent the wheel in many cases.

Excerpted with permission of Hachette India from Negotiating the New Normal: How India Must Grow in a Pandemic-Ridden World by Saurav Jha