Book Excerpt: How George Fernandes was caught, jailed and humiliated

Rummaging through his suitcase, they found a photo identity card of George Fernandes, president of the AIRF 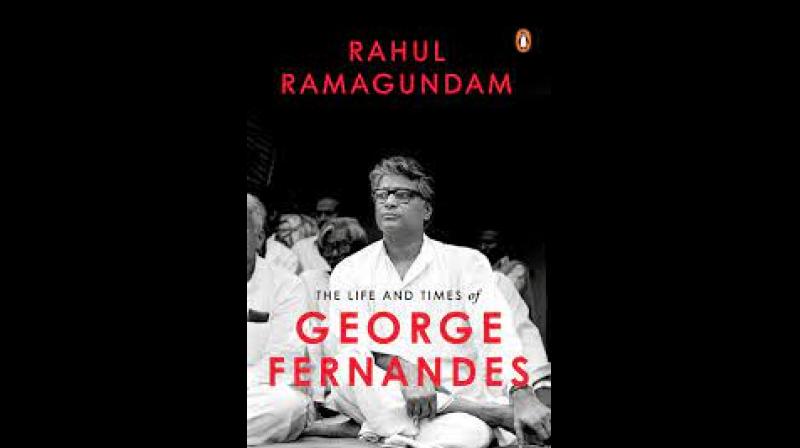 Coverpage of 'The Life and Times of George Fernandes'. (Image By Arrangement)

In the afternoon of June 10, 1976, finally, without much ado or gore, it all came to an end. George was arrested from St Paul’s Cathedral on Chowringhee Road in Calcutta. A posse of CBI men barged in and found three men sitting in a back room of the church auditorium. The church ran a social organisation called The Samaritans. Vijayan Pawamuni was its operational in-charge. He was one of the three men. The second was Vijay Narain from Varanasi, who had just arrived from Delhi. While coming in, he had noticed “many strange-looking people around the church”. There were men positioned even on the roofs of adjoining buildings. He asked the third man to leave immediately.

But as this man dithered, the raiding team broke in. Amidst a swirl of commotion and plenty of shouting, they asked each of them to give their identities. Vijayan Pawamuni responded, and said the two others were his guests. Did he have a guest register? There indeed was one in which the third man had signed as Professor Raj Sekhar from Allahabad on a research assignment. They asked for his luggage. He had kept a suitcase with Vijayan Pawamuni, who, thinking it safe, gave that over to them. Rummaging through it they found a photo identity card of George Fernandes, president of the AIRF. George though was not one to give up easily. With a deadpan face, he disclaimed he was whom they in their spurt of euphoria had assumed him to be.

Many years later, when asked why a man in his circumstances would carry anything that gave away his identity, he explained, ‘If the police were to gun me down, someone should know who the person was.

The arrest, contrary to what was long prophesied, didn’t end in an instant slaughter. He was taken to the police office at Alipore, where till the morning of the following day, he was made to sit on a “hard wooden chair” and not allowed to sleep. A flurry of intelligence men took turns interrogating him. They needed him to confess. He said nothing.

“In the hours immediately after my arrest,” he recollected a month later, “I told the police that I would make no statement whatsoever concerning my activities and movements for the period from 26 June 1975 to 10 June 1976”. He was served with an arrest order under the Maintenance of Internal Security Act (MISA). A special Air Force plane from Delhi brought the order, pending execution since July 1975.

Repeatedly, the Delhi Police had sent confidential circulars to the police across the states for his arrest. An August 1975 order had even enclosed a photograph of him for ready reference and identification. Later, they declared a reward for his capture, dead or alive. After the Baroda hideout was busted, the Intelligence Bureau (IB) renewed the “secret/immediate” order on 18 March 1976, for “a vigorous drive launched with a view to securing his apprehension”. Presently, he was flown to Delhi by the same Air Force transporter that had brought the arrest warrant.

The authorities were seemingly undecided about where to keep him in the capital. They drove him first to the iconic seventeenth-century Mughal Red Fort, with secret chambers to interrogate those charged with sedition. Then, he was taken to the Tihar Central Jail. A little before dusk, after a metropolitan magistrate had committed him to police custody, he was brought back to the Red Fort.

It was the sultry month of June. The air was humid and heavy. When the door was slammed shut behind him, he found himself in a “dark, ill-ventilated dungeon”. It smelled bad. It hadn’t been cleaned for years. He was not allowed “even my handkerchief with which to wipe the sweat in this hot oven of a lock-up nor an old newspaper with which to fan myself”. He was given two coarse blankets to sleep on. In one corner of the cell wasa clogged hole in the name of a toilet that bred stink and a swarm of mosquitoes. The overpowering stench and incessant whirring of insects would not let him rest.

The interrogation room, in contrast to his cell, was presentable. Sleep-deprived, at regular intervals he was brought in, questioned and returned to his dungeon. He was kept here for three days and three nights before being moved again. When on the occasion of the 28th Independence Day Indira Gandhi stood on the ramparts of the Red Fort to hoist the flag, he noted in his prison journal, “just a few feet away [from her] is the dingy, stinking black-hole” where he had been lodged “without bath and without civility”. More than this, he didn’t leave any record of what happened in those three days and three nights. Was it too humiliating for him to say it all? Or would talking of it be an indulgence in self-pity?

On the evening of 23 June, he was driven to Tihar Jail and kept in an isolated cell. Two days later, he was brought to the District Jail at Hissar in Haryana, some 180 kilometres north-west of Delhi. There, before being admitted, he was strip-searched, “with the jail staff trying to find out if I was carrying anything clandestine or incriminating hidden in the private parts of my body”. He wrote to the Union home minister describing the ordeal. The letter to “Dear Mr Reddy” was returned as its tone made it an unofficial communiqué, and he was advised to rewrite it on an official letter form which had sixteen ruled lines. He did so, beginning with a formal “Dear Sir”. The books and medicine bottles he had brought along were confiscated. The medicine bottles were returned the same night. The books — a set of six by Alexander Solzhenitsyn, one each by

Fredrick Forsyth and Norman Mailer, a copy of The Bermuda Triangle and the latest Reader’s Digest — were not. They were sent to the censor for permission. He was kept in a cage-like enclosure, made of iron bars and pipes, in a courtyard ringed by a high wall and guarded day and night by men in the watchtower. When it grew dark, powerful electric bulbs floodlit the entire yard to give it a look of a night sports ground. One day, a barrack guard told him that the gun of the man on the watchtower was empty of its firepower. He understood the trap in the message: “Should I try to escape, I would be shot”.

Excerpted with permission from The Life and Times of George Fernandes (Penguin, 2022)

The Life and Times of George Fernandes