Thriller as a parable of PM Modi’s India

The book, as the title suggests, is based in the national capital. 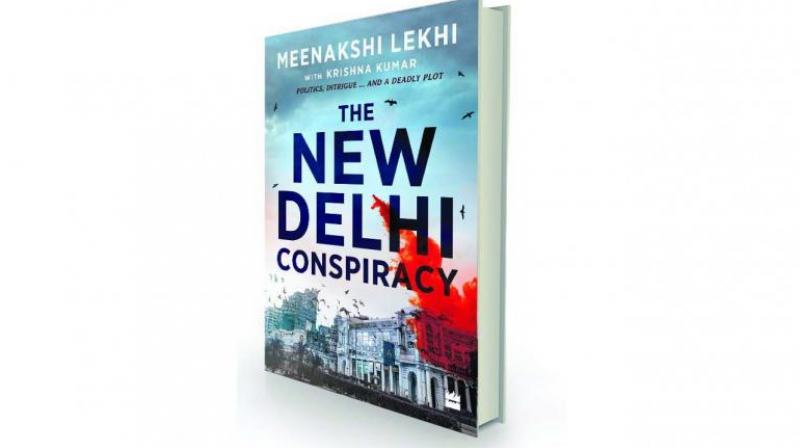 Meenakshi Lekhi, and her co-author Krishna Kumar, have demonstrated great gifts of imagination in The New Delhi Conspiracy. But the political intent is hard to miss. `

Ms Lekhi is known for taking up real issues of public interest, earlier as a Supreme Court advocate and activist; and subsequently as a Lok Sabha member. Her first novel The New Delhi Conspiracy, by contrast, is high on imagination and livewire drama. Whether the work would prove to be an exception in her career or trendsetter, only time can tell.

The book, as the title suggests, is based in the national capital. It is pegged to the politico-ideological battle being fought for the soul of New India. The intellectual-activist cabal, traditionally patronised by Lutyens’ Delhi, is facing immense heat from popular and nationalist Prime Minister Raghav Mohan. He has ensured accountability and transparency from the NGOs, leading to drying up of dubious foreign funding. It is easy to anticipate who Raghav Mohan, whom the masses cheer as RaMo, is modelled upon.

Prof. Narayan Deo Bakshi is RaMo’s ideological adversary, who has perfected the art of “political lieology”. He is funded in his mission by American tycoon Rabin Rumenstein, who funds such disruptive movements against elected governments in several countries. But as Prof. Bakshi's plans to defeat RaMo in elections backfire, he is compelled to join Rumenstein in a despicable plot to assassinate RaMo.

The chosen assassin, however, is not human but a robot nicknamed Lakshmi, whom RaMo is about to grant honorary citizenship of India. Laxmi, a humanoid developed in Zhifeng Robotics in Hong Kong, was programmed to be a techno-Bodhisattva by her inventor Samar. But the project chief Markus Benedit stole the codes to stealthily activate the evil in Lakshmi.

Samar had got a hint of this dangerous plan. His colleague Fyn Janseen had been murdered in broad daylight. So Samar comes all the way to India to tell to Vedika Khanna, a Member of Parliament, about the assassination plan
of RaMo. But he, in turn, gets killed in front of Vedika’s bungalow.

Why Samar chose an MP rather than the all-powerful NSA, NIA or home minister to communicate the secret is subject to speculation.

However, it is Vedika who sets up her private team of Kartik Sharan and Shreya Varshneya, an IT expert and a journalist, respectively, to visit Hong Kong and subsequently Tibet to solve the whole mystery. The description of Potala Palace in Tibet is sumptuous. The authors appear to be highly conversant with Buddhist philosophy and history. The description of meditative experiences of Dorje Tsering Wangyal in Chapter 32 is simply marvellous.

The book makes a breezy reading. But every thriller must be read with a willing suspension of disbelief. Why, for example, would Samar hide his secret diary in a monastery in far-off Lhasa? Why would he make the task even more difficult by writing a cipher using Buddhist symbols and codes, when time is of essence in saving RaMo?

In the end all glory is bestowed upon Vedika. It is evident from the description of Vedika, a successful lawyer and MP (p21), that she is modelled upon the lead author herself. It is a smart political message.

(The reviewer is an independent researcher based in New Delhi. He is the author of recently-published The Microphone Men: How Orators Created a Modern India.)