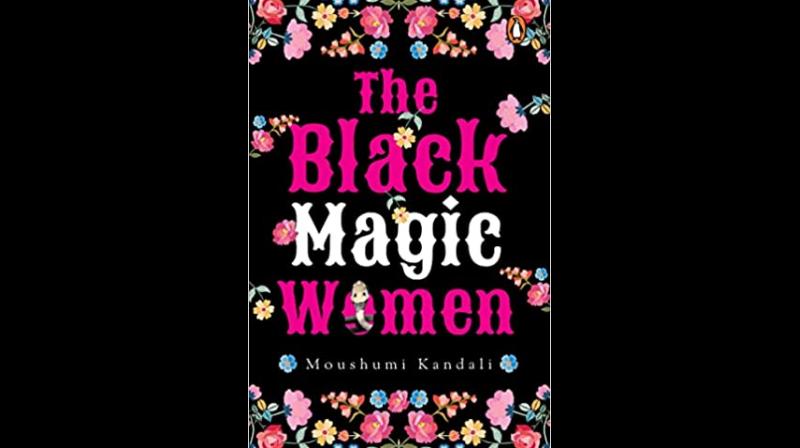 Cover image of the book 'The Black Magic Women: Stories from Northeast India' by Moushumi Kandali. (By Arrangement)

Perhaps I had really heard it. Or, imagined it? I did hear it. Just once. Just outside the window. Slicing through the shell of the night, it came out of its deep womb, and the throaty sound made the air vibrate. What a rude, screech, originated from the high octane of musical notes. Though I had heard it for the first time, I was sure that it was the actual sound.

Early in the morning, in a voice trembling with excitement, I told my father, “Last night I heard the sound of a peacock, Father.”

Father was sitting on the dhurrie in the puja room, with the oblong copper vessel filled with water and the bell metal plate containing blades of grass and milky white durun flowers in front of him. In the morning, when the fog and sun played hide and seek over an area which bore no evidence of a peacock living within miles, my father received this piece of news quietly and stared at me. Giving me his usual poignant smile, he said, “Really? How nice. You are indeed lucky. They must be around. In the deep jungle and hills, there must be a peacock, hiding away from us, dancing around with its open fan of feathers. Do you know, according to the Jatakas, Gautam Buddha, in one of his early incarnations, was born as a peacock. A golden peacock.”

After completing his recitation, he picked up the water vessel and the puja thali, and walked towards the courtyard, but stopped for a second to say, “Anything surreal we get to hear we hear only at midnight. Anything incomprehensible that happens happens only at midnight. At the junction of subconscious and unconscious, dream and illusion, we stand face to face with them.”

But certain incomprehensible incidents do take place in the daylight, too. Like what had happened the previous day. Class VII is when the simple dignity of childhood gives way to adolescent fancy.

The tall, lanky boy had come from Lower Assam and joined Class XII in our school. He gripped my hand firmly. In his solid grip, my fingers looked like a closed night queen flower. In a sudden move, he inserted a long needle-like thorn from a hiju tree into one of my fingertips.

“What are you doing, hey, why are you doing this?” The question that came like an arrow was from our English teacher’s lips. He was like a draft of fresh breeze from the river. Having completed his graduation from the most famous college in the state, he was filling in for Ajaya Baideo. After the birth of her child was over, Baideo would be back and he would go away.

“I won’t punish you. I won’t even tell anyone, but tell me honestly, why did you prick her finger with that hiju thorn? Why didn’t you give her the flower instead,” said “Sir”, our teacher.

The boy’s eyes welled up with tears. He looked at me and then at “Sir”, and fished out a green guava from his pocket. “I had actually meant to give this to her,” he blurted out shamefacedly. “I don’t know what suddenly came over me.”