For dialogue to succeed between Muslims and RSS-oriented Hindus, it is imperative for both sides to admit that there exist misgivings 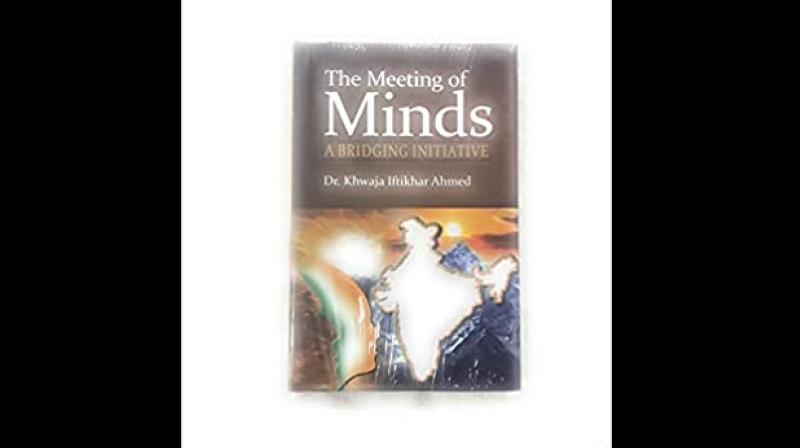 Cover page of 'The Meeting of Minds: A Bridging Initiative' by Khwaja Iftikhar Ahmed. (Twitter)

At a time when the acrimony between the Muslims of India and the ruling BJP, and its ideological guardian, the RSS, has only been subdued by the pandemic after a long spell of anti-CAA protests, Dr Khwaja Iftikhar Ahmed, a Jamia Nagar-based Muslim intellectual, has come up with the doctrine of bridging the gap between the Hindu Right and the Muslims. His book, The Meeting of Minds: A Bridging Initiative, was released by none other than RSS chief Mohan Bhagwat on July 4. It was the first time in 95 years of RSS’s history that a sarsanghachalak presided over a function that marked the effort of a Muslim citizen.

The release of the book can be seen as the RSS’s outreach to Muslims, especially in states like Uttar Pradesh where they are in significant numbers, ahead of the Assembly elections there.

The book is divided into 32 chapters. In the initial chapters, the writer explains how Hindus and Muslims nurse ill-conceived notions about one another. He also explains how the RSS-BJP combine came into being and what philosophy leads to its core ideology. He writes, “The RSS ideology derives its strength from the philosophy of Hindutva and the idea of Hindu Asmita... They consider Bharat as a Divya Bhoomi where Hindus have the first right to live. They call every soul born on this part of the planet, Hindu.” The author wants Indian Muslims to wake up to this reality and accept the fact that they are geographically Hindus and thus very much a part of this land with every right to practise their own faith.

The writer wants the RSS-BJP to approach Muslims. “The Supreme Court verdict on the Ayodhya dispute is a turning point in our relationship. The Muslim community considers this judgment as its moral victory and for our sister community, a material one. Both the communities… gracefully accepted this verdict,” he writes. Dialogue is the way forward. Besides, there are other challenges to cope with, including natural disasters like the Covid pandemic.

For dialogue to succeed between Muslims and RSS-oriented Hindus, it is imperative, according to the writer, for both sides to admit that there exist misgivings. He chides Muslims for letting their view of the RSS be dominated by stereotypes. But “the hate and hostility factor should be treated as more of an inspiration for dialogue rather than hindrance”.

However, the book fails to make it clear as to how both sides can make a start in this direction. Will it be the Muslims who start joining the RSS’s Muslim Rashtriya Manch? Should Muslims start voting for the BJP as they do for the Congress and other parties? Or should the RSS and BJP first appoint Muslim office-bearers and political candidates, starting from the upcoming polls? These are questions left unanswered.