In his memoir, Kumar shares his "incredible journey" as a banker — from joining SBI as a probationary officer to becoming its chairman 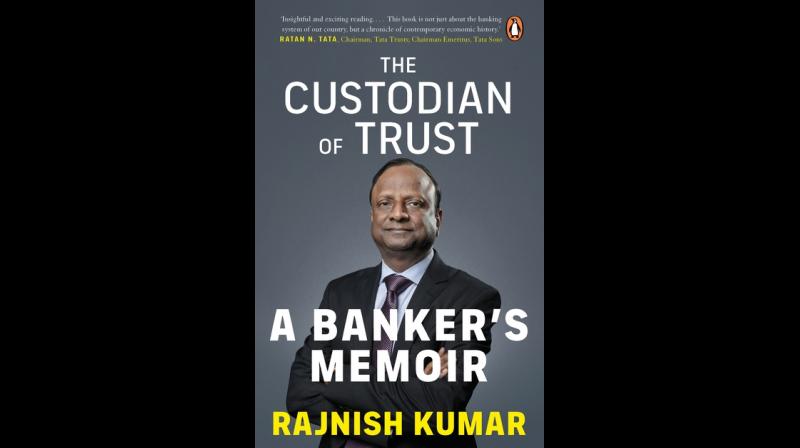 The Custodian of Trust: A Banker's Memoir (Photo By Arrangement)

Money management is no more a genteel world. In a prophetic warning, way back in 1913, John Maynard Keynes wrote in Indian Currency and Finance: “In a country so dangerous for banking as India, (it) should be conducted on the safest possible principles.”  This logic appears to be the central idea as we read through The Custodian of Trust: A Banker's Memoir. It is by Rajnish Kumar, former chairman of India’s largest lender, State Bank of India. What emerges through a combination of anecdotes and deliberations of various stakeholders of the sector is a collage of events that document the evolution of the bank from being a prosaic lender to an astute leader defining a pathbreaking trajectory for India's largest bank.

In his memoir, Kumar shares his "incredible journey" as a banker — from joining SBI as a probationary officer in 1980 to becoming its chairman in 2017 — capturing the many milestones he recorded in the banking sector during his career. The most endearing part of the book is that Kumar, even while talking about his achievements, does not come across as blowing his own trumpet. Most memoirs are written to preserve a story that would otherwise be lost. Whatever be the motive,  Kumar emerges as a level-headed banker. As with all good memoir writers, he is candid, authentic and artful. A good memoir doesn't have to be cradle-to-grave: a slice of life, or collage of fragments, can be enough. In this case, it is the story of SBI seen through the lens of Kumar.

Kumar’s honesty and integrity shine through at every turn. It is a rich memoir, brimming with grace and grit, and laced with unusual frankness and generosit. Most corporate memoirs combine simplistic lessons with vague platitudes for success. This book is refreshingly different. Kumar’s keen and insightful explanation of various decisions gives a cool-headed nod to the spreadsheets and wise judgements. He managed the financial turbulent period in the sector during his tenure with quiet fortitude and unmatched personal confidence.

Finance is a wild animal made up of so much human drama and passions that it needs the most sophisticated minds to read and leaven the nuances that shape its contours. The biggest misconception about banking is that people think one should have a degree in business or finance to do well in this industry.

The Indian banking sector is going through one of its most tumultuous phases and is beleaguered by a mounting pile of troubled loans. The proportion of bad debts, where the borrower is not making interest payments or not repaying any principal, has surged to such horrifying levels that the banks are creaking under the strain. Several financial storms have rumbled on in the financial system, a third of which is on crutches. The problem of non-performing loans (NPLs) has severely impacted the balance sheet and profitability of banks, especially those in the public sector. A prolonged shadow lending crisis has added a massive bad loan pile. Kumar understood the sense of urgency and took some revolutionary initiatives. Kumar’s successes in resolving so many contentious banking issues confirm the theory that versatility rather than domain expertise is the key to more holistic and profound decision making. A banker knows the surface of many disciplines but depths of none; he should be ready to unlearn certain theoretical assumptions if his professional experience warrants it.

Kumar's statesman-like leadership helped, as did his foresight. The widely prescribed traits such as chutzpah, judgment and luck can only help navigate limited roadblocks it was Kumar’s uncanny knack of sniffing the hidden signals that fortold potential financial hazards. Kumar’s appetite for risk was prodigious but equally strong were his forensic and appraisal skills.

Kumar shines a light on what the future holds for the world of finance in India and how the past will continue to cast its shadow on the future. He re-creates all the drama and turmoil, revealing never-disclosed details and elucidating how decisions made in the last few years by some of the captains of industry sowed the seeds of the debacle. This true story is not just a look at banks and corporates that were “too big to fail”; it is a real-life thriller with a cast of bold-faced names who themselves thought they were too big and too wise to fail.

There are many useful learnings from Kumar’s experiences. India’s financial community has a lot on its plate — demographic changes structural changes and operational changes. It is now all playing out. The most important thing at this juncture is financial stability. It has become extremely difficult to assess which parts of the loan book could develop into default hotspots. We need a new generation of bankers of Kumar’s vintage with vigilant eyes and firefighting abilities to ensure the robust and resilient financial health of the system.