It is an irresistible fascination, a hide-and-seek relationship. After all, Bhatt has his own set of responsibilities. 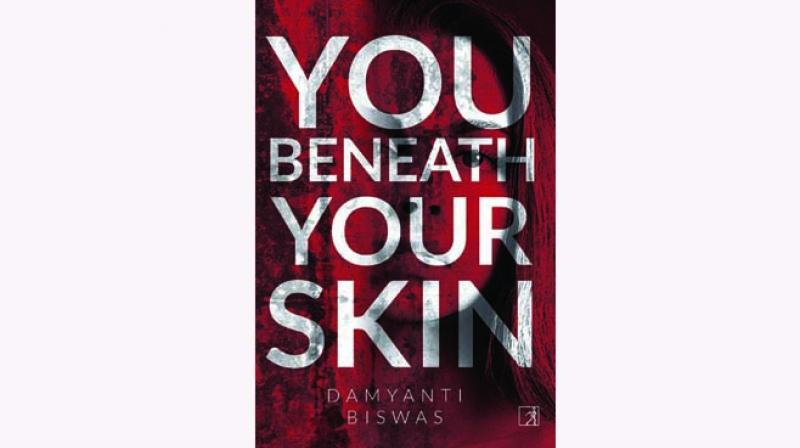 You beneath Your Skin By Damyanti Biswas Simon and Schuster pp 390; Rs 399

You beneath Your Skin is a gripping tale of fractured relationships, unhealed wounds, psychological manipulation and corruption in the system, the power corridors of “Rajdhani” and families alike.

The story revolves around an Indian American single mother, Anjali Morgan, who is sometimes seamless and sometimes struggles to switch between her job as a psychiatrist and duties as a mother to her autistic son. She is in a long-standing relationship with an ambitious-yet-caring police commissioner, Jatin Bhatt. It is an irresistible fascination, a hide-and-seek relationship. After all, Bhatt has his own set of responsibilities. He is a doting father to his son Varun but a cold husband to his wife. He is also a father-figure to Maya, his ‘baby’ sister who is 19 years younger to him.

The story is set in dark, smog-choked New Delhi. It is spine-chilling in more ways than one — first there are the harsh winters that Delhi is known for and frequent mentions of Anjali’s fleece jacket and Bhat’s sweaters, but then, also across the national capital, there is a crime spree. Underprivileged women are found stuffed in trash bags, faces and bodies disfigured with acid beyond recognition. Anjali, who is helping Bhat solve crime, ends up becoming the focus of sordid happenings herself.

Varun, or Jatin’s Gabru Jawan, is not at all who he appears to be.  His father unapologetically indulges him and considers him polite and well-behaved, but surprisingly, being the decorated cop that he is, has no clue of events happening under his own very nose.

The morbid descriptions and crime details, like a body cut in half, encounters, gunshots, naked, bruised and drugged women, speech loss, heart attack and burns, do get to be a bit depressing. Reading about people like Lahiri and Manoj, who, respectively, run drug and prostitution rackets, and their juvenile drug dealer Radhe, a brother willing to traffic his younger sister, Sakhi, sometimes gives you a wobbly stomach. But the characters are quite relatable, and the crimes and cover-ups are quite real, as is their “sacrifice” for the promotion, silence in the face of wrongdoing and having no say when matters get out of hand. Broken-hearts, betrayal, deception, long-held grudges, schemes of revenge, fear, despair, half- truths, incomplete sentences and filthy secrets — are they not part of our lives whether in America or in India?  Isn’t parental bias a reality familiar to us all?

The book is a page-turner, though. There is never a dull moment, whether it is Varun’s monologues or the racy romance between Jatin and his "white half-breed" lover. At one point of time, Jatin's SHO Grewal tells him he is happy where he is and does not want to rise through the ranks by engaging in office politics and then end up pushing paper. Jatin jocularly asks him if he is calling him, Jatin, a paper pusher.  To which Grewal replies: “All I am saying is I am happy where I am, can you say the same for yourself, Jatin?”

These lines had me reflecting on how rank and happiness are not directly proportional to each other in the corporate world.

Tags: you beneath your skin