Jairam Ramesh’s Light of Asia, there can be no doubt, is an altogether satisfying and successful experiment 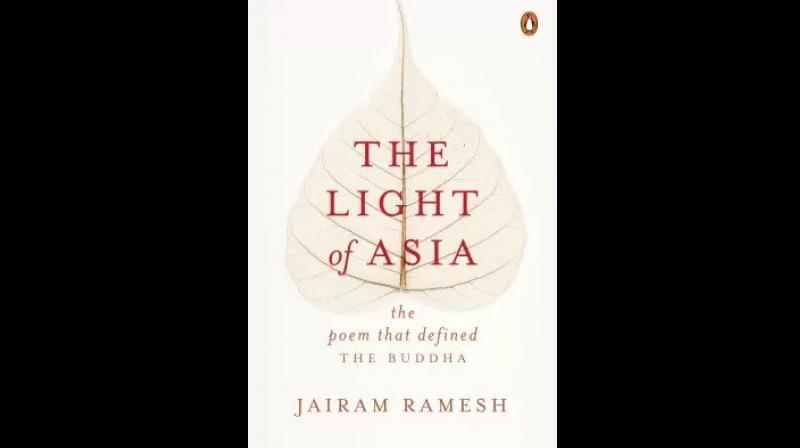 Cover page of The Light of Asia: The Poem that Defined the Buddha

I remember, in my undergrad years as a student of English Literature, our BA Honours curriculum — which, by the way, had not been updated for decades and counted T.S. Eliot as the most modern of moderns — did not include Edwin Arnold. In history of literature classes, Arnold was dismissed as a minor late-Victorian poet, his career as a journalist and his preference for “Oriental” themes painting him into a specialist’s corner, of interest to only the most dogged of Victorianists. In later years, while at JNU, I encountered Arnold’s charming translation of Jayadeva’s Gita Govinda, published as The Indian Song of Songs in 1875. I remember being a tiny bit amused since, in keeping with Victorian sentiments, it offered a somewhat Bowdlerised version of the original. (Arnold was also appreciated for his eminently readable translation of the Bhagvad Gita — The Song Celestial, published a decade later in 1885.)

All this to say that I had no inkling of the singular position that Arnold occupies in history, as the author of a book that, to use millennial phraseology, went utterly and truly viral upon its publication in the year 1879, becoming a lodestar of renewed interest in Buddhism. This book was The Light of Asia, an epic poem composed in formidable blank verse, about the life and enlightenment of Prince Siddhartha of Kapilavastu. The book’s remarkable life and afterlife is the subject of Jairam Ramesh’s fascinating new tome, The Light of Asia: the Poem that Defined the Buddha. In a sense then, after his masterly biographies of Indira Gandhi, P.N. Haksar and Krishna Menon, all published in the last five years, Ramesh has expanded the range of his exploration of the form to now write a unique biography — of a book!

Edwin Arnold was born in 1832 in Gravesend, an old town close to London. (The England where he was born is the setting of George Eliot’s Middlemarch; for further context, his year of birth makes him a near-contemporary of Bankim Chandra Chatterjee, who was born six years later). After a gentleman’s education at Oxford, where he studied the classics and won the coveted Newdigate Prize in 1852, like many Englishmen of his time who had no great private income but some influential contacts, he was able to secure the principalship of Poona College (which later became renowned as the Deccan College) at the ripe old age of 25, and came to India in December 1857.

While the revolution of 1857 was still simmering, Arnold and his young family were settling down in Poona. Soon, his talent in classical languages brought him to Sanskrit: fortunately for him, his teacher was the eminent scholar Krishna Shastri Chiplunkar, whose son, Vishnu Shastri Chiplunkar, would later go on to be considered the “poet of Maharashtra’s nationalist revival”. Poona at the time was also witnessing the unique ferment that characterised the sub-continent’s refashioning of itself: it was the Poona of Jyotirao Phule, of capitalist endeavour, of reformist strains within Hindu dharma, and the gradual spread of English education and the attendant political awareness that it brought.

In the summer of 1860, after two-and-a-half years in India, when Arnold returned to England with his family, the debate between faith and doubt was already raging at home. In 1859, with the publication of Darwin’s The Origin of Species, the old Christian order had effectively suffered a shock from which it would never quite recover. In light of this spirit, it’s not difficult to read Arnold’s turn towards eastern mysticism, which the Indologists had made somewhat mainstream by then.

In Ramesh’s treatment however, Arnold’s biography, cogently summarised, is relevant only to the extent that it illumines the territory — personal as well as social — that produced The Light of Asia, based on a free adaptation of the Lalitavistara. It is the book, and its unique journey, that is the central motif, and his extraordinary primary research establishes how The Light of Asia came to be a harbinger for a global revival of Buddhism. There are of course references to great Indians of the time who were captivated by the text too — Swami Vivekananda, Rabindranath Tagore, M.K. Gandhi, Jawaharlal Nehru and Dr B.R. Ambedkar. The viral nature of the phenomenon has some exciting international conduits: Madame Blavatsky, the controversial Theosophist, played a role, and so did Arnold’s American father-in-law William Henry Channing — his second wife Jennie was of Boston extraction — but these could only have been nudges in the play of fate. That The Light of Asia, not a work of scholarship but a long poem, became an instant bestseller in the US, going through eight editions in a short time, is truly a testament to the timeless appeal of its subject, Gautama Buddha.

In India too, the book had a curious afterlife, translated into many Indian languages, and then into film. It is here again that Ramesh’s genius as a researcher shines through, the biographer’s imagination fuelling rigorous investigation into the book’s forays into so many extraordinary directions. The connections that unfold are staggering — Arnold had a role in the Buddhist reclamation of the ancient site of Bodh Gaya, for instance, along with the monk Dharmapala, who was also a speaker at the Parliament of World Religions in Chicago, where Swami Vivekananda had spoken. Together, like the jagged pieces of a mirror shattered by time they tell us the splintered history of an entire age. Arnold’s The Light of Asia becomes the perfect trope to tell this complex, many-voiced account, ending appositely with the story of his Indian grandchildren who live in Bhopal.

Jairam Ramesh’s Light of Asia, there can be no doubt, is an altogether satisfying and successful experiment, and will not only launch other projects — a history of the Theosophists perhaps? — but will hopefully make the biography of a book a far more accepted genre in India.

The Light of Asia: The Poem that Defined the Buddha (pp. 448) by Jairam Ramesh is published by Penguin Random House and priced at Rs. 799.