Here is an excerpt from Saeeda Bano's biography 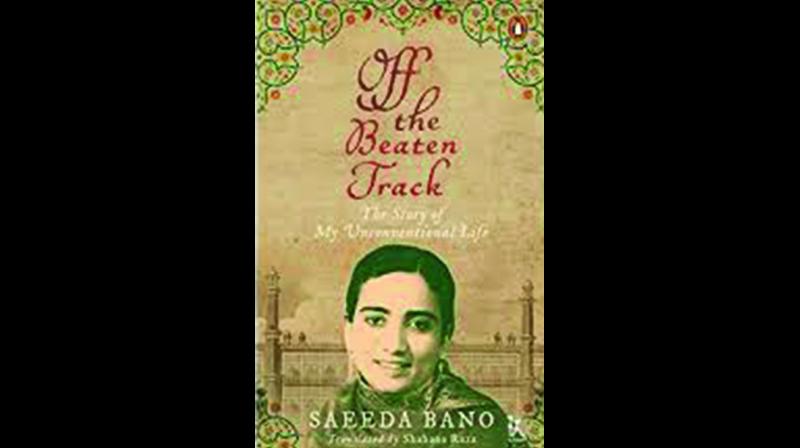 Off the Beaten Track

In December of 1942 Masud came back on vacation and we began making arrangements for his marriage with Sughra. Most of the responsibilities were once again handed over to me. Aqila and I got busy with the shopping. The main incident I can recall from this time that’s well worth a mention is that Begum Akhtar was called to do a mujra at the bride’s house from our, that is the groom’s, side. She was still a courtesan at this time and went by her former name, Akhtari Bai. Akhtari had a unique character. Despite performing mujra her body language did not reflect the vulgarity or cheapness one associates with women from this profession.

Around 1938 a radio station was set up in Lucknow. Everyone was extremely interested. Shows for women and children were also being broadcast which used to be hosted by women. Listening to a radio discussion or radio play, we would often hear the names of these women being announced on air. Some of us began to wish we could also hear our voices booming across the air waves. At the same time we realised this would not be possible since women from good families kept purdah from courtesans.

Slowly executives at the radio station also got to know that most women from traditional families of Lucknow, maintained purdah from courtesans and because of this, would never visit the station.

The radio station was in need of educated women to participate in various on-air programmes. The officials made a concerted effort to become friendly with men from the most conservative of families. They informed them that though courtesans visit the station (as it would be next to impossible to have any programme on air without them; after all they are accomplished singers and it is essential to have good music on air) the entrance they use and the studios they work out of are completely separate from the ones used by the other employees.

After managing to create a good impression of themselves with various families of Lucknow, the officials started sending out invites to their friends and the women in their homes to come and participate in a talk or discussion at the station. I also received a letter from the Director in which he politely suggested, I should come to the station with my relative Huma Baji to take part in a discussion, on so and so date. I showed the invite to my husband. His response was, ‘of course… you must accept it.’

Now every second week or so I would receive a request to give a talk on some topic or the other or to narrate a story for the children’s show or compere a ladies programme on radio. I already had Abbas Raza’s permission. After a while, one of the officers by the name of Haseeb sahab suggested I start compering a woman’s programme regularly. When I asked for details, he said, ‘Just come once a week to the radio station for a couple of hours. Whatever has to be broadcast will be scripted and handed over to you.’ Saeed was around two years old and by the grace of God I had a fabulous maid. I accepted Haseeb sahab’s offer. Once a week I drove down to Lucknow, read out details of a woman’s programme for radio and returned to Barabanki by evening. I used to drive myself.

During our stay in Barabanki we became quite friendly with a District Magistrate by the name of Mr Abbasi Wahajuddin. Eight miles to the north of Barabanki there is a small town called Dewa Sharif. It is famous for the mazar, the shrine of an early 19th century Sufi, Haji Waris Ali Shah. Every year to commemorate his death anniversary, a grand celebration is held for an entire week at Dewa.

One such night, the tawaifs (courtesans) were invited to sing. Special arrangements were made for us to sit behind a chilman, a thin cloth curtain, and see them perform since women from good families kept purdah from tawaifs. How strange and very hypocritical! When it came to hearing the qawwals perform, we sat with the men.

Anyway, we were simply delighted to be attending the event. From behind the chilman what do we see? A white spotless sheet spread out across the length and breadth of the large hall stretching in front of us; several plush carpets rolled open near the walls on top of which gautakiyas or bolsters had been placed strategically. Reclining comfortably on these, were the privileged listeners, the audience of men. Lounging regally on a gautakiya with an extremely beautiful razai (quilt) thrown over her feet sat the famous courtesan Benazir Bai. On either side of her, at the opposite end, inside the same razai, sat two of her ardent admirers.

Another tawaif was seated in the same andaaz (style). She also had a gorgeous quilt covering her feet. To one side of her sat Akhtari Bai.

She was wearing a simple sari, pale grey with beautiful silver zari embroidery. Her face looked radiant, without a trace of arrogance. She did not have a razai, nor was she lounging on a bolster.

After a short while, Munni Bai finished her song and Akhtari Bai picked up the tanpura. She hummed a few stray notes to tune the instrument to her voice, smiled, looked at the audience and started singing. What a magical voice! Within seconds, the entire gathering was mesmerised.

The mehfil ended around 4am, but we didn’t feel as though we’d had enough. I felt a woman who can sit in a gathering surrounded by all sorts of men and present her talent with such dignity that everyone seems hypnotised must have an amazing personality; one should say a prayer at the hem of her skirt.

Every Friday I used to drive down from Barabanki to broadcast a women’s programme on All India Radio. One day, after rehearsals as I was sitting alone in the studio, Akhtari Bai suddenly walked in. Greeting me warmly with a quick salam she said, ‘Begum sahab I would like to speak with you.’ I was shocked to see her to begin with, but her second sentence had me stumped.

‘Bittan, please get me married to Ishtiaq Abbasi sahab.’ ‘Ya Allah, what sort of woman is this?’ I thought, keeping my feelings to myself. I can’t recall what I said in reply but I clearly remember that she talked nonstop. Then she apologised and said, ‘What do I do Bibi, I can’t live without him.’ Then she left as abruptly as she had walked in. I finished recording, went home and narrated the entire episode to Abbas Raza. He was most amused and said, ‘Let’s call Ishtiaq Bhai and tell him he has received a proposal.’ ‘I just want to see his reaction,’ I replied, laughing.

Both my father and Justice Raza were well acquainted with Ishtiaq Ahmed Abbasi’s family. Ishtiaq Bhai was married to Asha Begum, whose father, Mateen-us-Zaman sahab was Special Advisor to Nawab Sultan Jahan Begum in Bhopal. Asha Begum had passed away two years back. My husband and I had known Ishtiaq Bhai for decades. We invited Ishtiaq Bhai to our place for tea.

In 1945, Akhtari Bai married Ishtiaq Ahmed Abbasi, the Lucknow-based barrister, and was thenceforward known as Begum Akhtar. This excerpt is published from Off the Beaten Track: The Story of My Unconventional Life by Saeeda Bano, translated by Shahana Raza with permission from Penguin.

Off the Beaten Track: The Story of My Unconventional Life

Tags: off the beaten track