It's interesting to see how one of rock ’n’ roll’s biggest stars endures almost 20 years after his death. 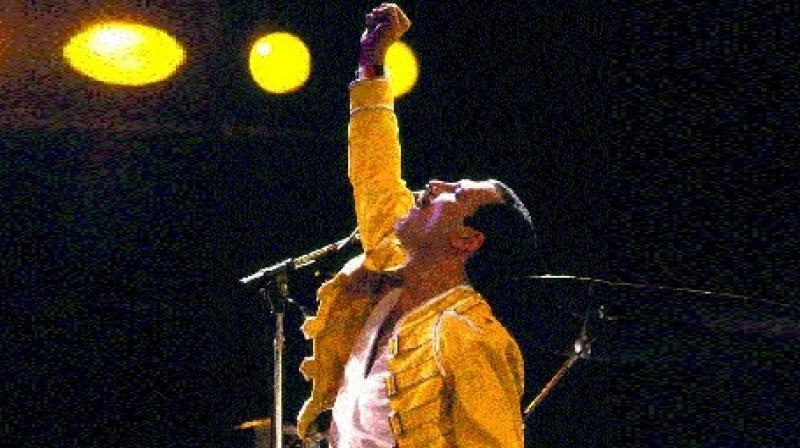 The best aspect of the book is Ms Jones’ free reference to other material on Freddie she considers insightful, rendering this book more useful for those who want to know more.

It is interesting to see how one of rock ’n’ roll’s biggest stars, Queen’s Freddie Mercury, endures almost 20 years after his death. The interest in him and the band seems stronger now than they enjoyed in their heyday. The timely release of Freddie Mercury — The Definitive Biography, written by rock journalist Lesley-Ann Jones ahead of the 20th death anniversary of the rock singer on November 24, promises to give a closer glimpse into the man and the mystery surrounding him. It serves as a link between the band and the new generation. This biography first came out in 1998 and is duly updated till 2010. Ms Jones’ task is already cut out: to deal with the double-edged sword of not upsetting the Queen’s “legacy managers” and bring something new on the table for the old and new audience alike. Many previous biographies have upset people closely related to Queen and Freddie, especially the one by Freddie’s mate Jim Hutton, who, in the process of publishing a tell-all biography, isolated himself from the members and friends of Queen. Ms Jones’ biography is well-articulated, researched and thorough from this perspective. It is evident from the output that she took many arduous journeys to interview key people related to Freddie’s life. From his birthplace in Zanzibar, his boarding school time spent in India and his final home in London, this bio has it all. Ms Jones unfolds her story by letting people talk and relate the incidents rather than interpreting events herself. She skilfully manages to draw out material hitherto unpublished through interviews and research. Ms Jones’ biography begins in medias res in 1984. Queen is struggling with a flagging career and drifting in space after having achieved superstardom. They urgently need fresh impetus or risk further degradation as a musical entity. That fresh impetus comes from Sir Bob Geldof. Sir Bob is organising Live Aid, the most ambitious gig ever imagined. He invites Queen to perform and the rest is history. That evening what Queen did is remembered as one of the best performances by the band. Ms Jones has done extensive research and travelling to sketch an enduring and endearing portrait of Freddie. This bio explores Freddie’s ambition, restlessness, imagination, sexuality, conflicts, handling superstardom and eventually his fatal disease. And her meticulous research shows through the book. It holds interest because it brings multiple perspectives to the table. There is no single perspective of any situation at any given point. Considering the complexity of her subject, one can imagine the difficulties Ms Jones had to endure. Ms Jones’ ambitious target of writing about Queen and Freddie is made much difficult by the tightly-controlled information flow about the band and Freddie. In a way, lack of information on Freddie is part of the Queen legacy. There are, though, a few problems with this book as “the definitive biography” of the late singer. Being a journalist, Ms Jones couldn’t avoid following the classic journalistic credo: facts are sacred. The book is full of names and facts, mostly poorly linked with each another. As the bio is not chronologically narrated, its basic requirement is to construct tightly around scenes and join the dots well. What she derives from one interview with one person is contradicted by another person in another interview. She is objective to the point of including all the subjective views of Freddie in her bio, giving a free run to read and interpret. The end result is an inconsistent portrait of the star Ms Jones is trying so hard to draw. Ms Jones’ text is also considerably unsure of her subject’s internal turmoil. For example, when Freddie breaks up with Mary Austin, the love of his life, the text says: “It must have been difficult for him.” Ms Jones often digresses and elaborately describes events which do not distantly help understand Freddie’s persona one bit. For instance, she talks about Elton John and his friend John Reid for almost two pages in Chapter 13. She digs deeper into Reid’s connections, his sexual orientation, past and other things. The task of writing about Freddie is fraught with its own latent difficulties. People associated with Queen or Freddie consider themselves as the keepers of his privacy and legacy. It would have been impossible for Ms Jones to be able to access material that portrayed Freddie anything else than the image Freddie projected himself. The band doggedly wants to keep his wishes. This bio doesn’t dive deep enough to let you take a glimpse of the atrocious genius Freddie was but it does give you a bird’s eye view of the life and death of the rock star. The best aspect of the book is Ms Jones’ free reference to other material on Freddie she considers insightful, rendering this book more useful for those who want to know more. In this sense, her work overarches all available material on Freddie, working as the binding factor.