She Sails, She Soars

These Six female officers have embarked on an eight-month mission onboard the INS Tarini to promote women in sailing and in the navy. 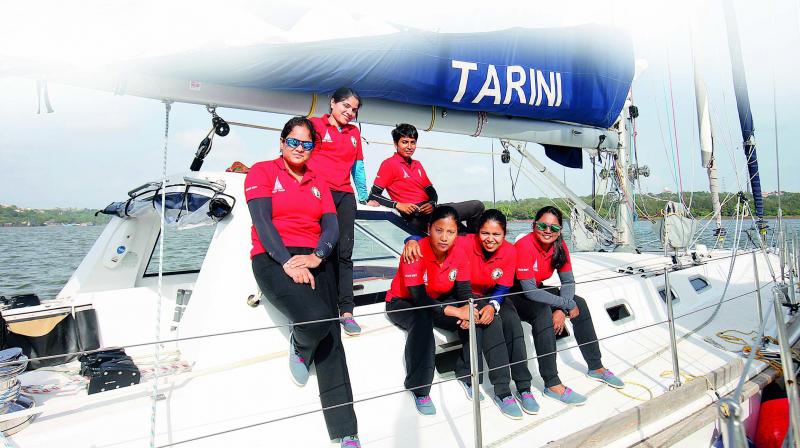 They stand tall on the bridge of INS Tarini, looking beyond at the ocean of possibilities before them. They are the first all-women team sailing over 21,600 nautical miles around the world in eight months.

As role models, their objective is to bring women into the Navy, and open the Navy’s higher echelons to female officers. Since April 2015, the six women have been posted on board the iconic Mhadei, as INSV (Indian Navy Sailing Vessel) Tarini was in the initial stages of construction with theoretical and practical training already well in earnest at the iconic vessel.

These sailing maidens have a quiet toughness about them, and their brilliance in seamanship can easily equal any of their male comrades.

“When I was asked if I wanted to be part of the planned ‘all-women circumnavigation’ — Sagar Parikrama III, I immediately stepped in. Around the same time, the Navy identified five other young, dynamic women officers with a common interest in sailing, who were also a part of the above expeditions in its various forays. This was how six of us, each from different parts of the country, and different cadres in the Navy were appointed to form a team to attempt an ‘all-women circumnavigation’ in August 2017,” says Vartika Joshi, lieutenant commander and captain of INSV Tarini.

Lieutenant Commander Vartika joined the Navy without an inkling that it was yet to induct women officers in ocean sailing platforms. “The realisation of how less I knew about the oceans triggered me to apply for a Navy career,” says Vartika, who pursued her graduation in Aerospace Engineering and joined the Navy as a Naval Architect.

Their first mission was to sail the boat independently around the Indian peninsula during the International Fleet Review held in January 2016. Evolving into a great team, there has been no looking back since.

On what inspired Vartika, she says, “In December 2014, I got to know INSV Mhadei was celebrating completion of 1,00,000 nautical miles by sailing around the Indian peninsula. I registered and sailed with a team of four, skippered and mentored by Capt. Dilip Donde. I was still not aware of what had been planned. Getting an opportunity on the Mhadei kindled my offshore sailing interest.”

Naval officers are of a different mettle and education officer and talented singer, Lt Shougrakpam Vijaya Devi explains, “Active service has always inspired me, but I never thought I would join the Navy. After post-graduation in literature from Delhi University, I was inclined towards the civil services, but it was my destiny to join the Navy. The naval uniform has always fascinated me and now I am wearing one. What more can I ask for? The Navy says ‘see the world’ and I am.” Their circumnavigation is planned in five legs, including four stopovers at Fremantle (Western Australia), Lyttelton (New Zealand), Port Stanley (Falkland Islands) and Cape Town (South Africa). The voyage is expected to last eight months.

From a time when women were forbidden to serve on naval ships — today they’re at the helm of it. The six officers  have a huge task ahead for which they have inculcated multiple skills — repairing onboard equipment, communication, weather prediction, navigation to cleanship, cooking and overall upkeep of the boat, and most importantly, the ability to work and live together for a long duration in a 17-metre boat.

About the opportunities available to women wanting to join the Navy today, Hyderabad-based Lt Aishwarya Boddapati, a Naval architect and writer, says, “Compared to the opportunities when we joined, there are immense opportunities today in open media and websites with frequent ads on TV and newspapers.”