If you are fond of exotic cuisine, rich culture, turbulent history and some outstanding natural beauty, then Poland is your best bet. 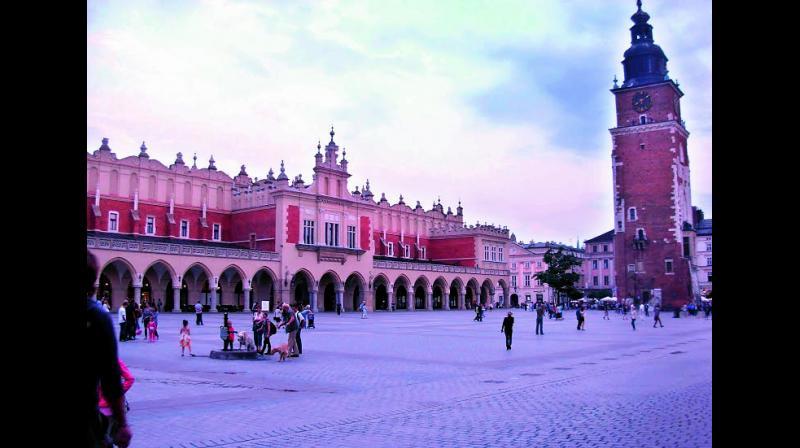 The beautiful medieval market square at Krakow dates back to the 13th century.

Poland, is probably the only place in Europe where the horrors of the Second World War juxtapose itself with high street fashion and modern glass facade. If you are fond of unique cuisine, rich culture, history and some outstanding natural beauty, then Poland is truly the place to be.

It was viewed as the gateway to Eastern Europe for the longest time, but today more and more tourists are flocking to this European gem. It inexpensive and relatively a less commercial tourist hotspot compared to Western Europe.

Not many know that Poland's capital, Warsaw has earned the title of the most destroyed city on the planet — nearly 90 per cent of Warsaw was bombed and destroyed during the Second World War. But with sheer hard work and determination, the Poles rebuild the city brick-by-brick. In fact, the Museum of the History of Polish Jews takes one back in time. The reconstructed Old Town, which is on the UNESCO list, is always buzzing with street musicians, cafés and backpackers. But despite its mass appeal, Poland remains relatively crowd-free and inexpensive even in summer unlike the rest of Europe. The vintage tramps with their bells and whistles are chug straight from some bedtime stories.

Marvellous Market Square
When I landed in Krakow, I was most impressed with its magnificent architecture and beautiful churches. You will find buildings with Classical, Baroque and even Gothic style architecture. Krakow is no doubt Poland's cultural jewel. The medieval Old Town, with its cobbled streets, horse carriages and cute cafes still remains firmly intact to its original charm. The Stary Rynek (Old Market Square) is probably the best place to sit and do some people-watching. Not to forget, the bugle calls from the uneven towers of St Mary's Basilica that cut through the cool wind every hour.

The setting is perfect to soak oneself in the afternoon sun and try some Polish vodkas (Zubrowka, Belvedere, Chopin to name a few) and gorge some Pierogi (Polish dumplings), chicken soup, cabbage roll, or breaded pork cutlet. You should also explore the Wawel Castle and stroll along the Kazimierz. Wherever you look in Poland, it's hard to escape the country's pristine beauty and turbulent history. Many a bloody battles were raged on its soil.

Salted Splendours
The Wieliczka Salt Mine that date back to the 13th century is located 15-km from Krakow. It is probably the only place in the world that has sculptures, statues, walls, floor tiles and even chandeliers that are intricately carved out of salt.

Legend has it that the salt mine was founded because of Hungarian Princess Kinga. She dropped her ring on the ground and the locals dug a deep hole to find it, but instead found salt deposits. The miners with their bare hands dug up all the shafts and beautiful chambers. However, during World War II, the Nazi Germans used the salt chambers to stock their supplies.

Wartime history
For history aficionados, Poland is a treasure trove of mystery, betrayals, and the ultimate limits of human minds - both for destruction as well as the fight for survival.

Even today, Jews from across the world come and pay tribute to Oskar Schindler at his Enamel Factory in Krakow. Schindler, a wealthy German businessman had saved the lives of over 1,000 Jews. The famous movie, Schindler's List (1993) was shot here.

The concentration camp of Auschwitz and Birkenau is probably one of the saddest places to visit in Poland. Millions of Jews were killed in these camps. I was in two minds whether to visit them. “You have hundreds of museums in the world, but there is only one Auschwitz,” said my host, who had lost some of here relatives in the holocaust. I mustered the courage and visited both the Jewish extermination camps, only to come back and think about the horrors committed by the Nazis. I nursed myself to a stiff drink that night and slipped in bed, only to wake up the next day to the brighter side of Poland.