‘I feel valued and encouraged’

We caught up with this talented artiste after she performed alongside the Los Angeles Philharmonic Orchestra recently. 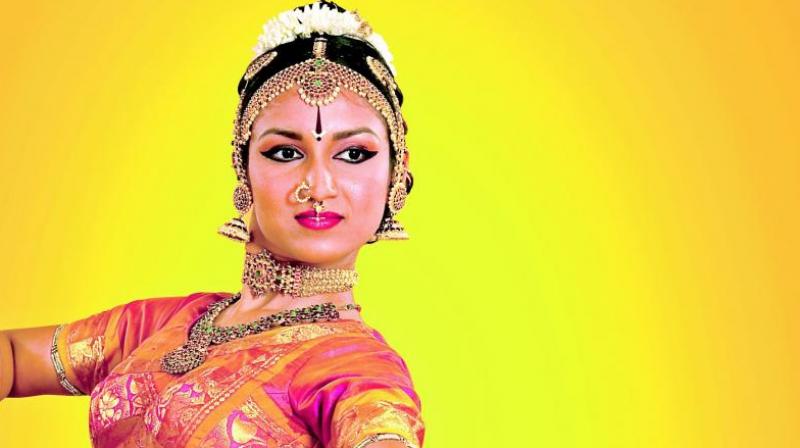 She is the daughter of legendary Kuchipudi dancers, Dr Raja Reddy and Kaushalya Reddy. In her career spanning two decades, she has toured multiple countries and has won several prestigious awards. We caught up with this talented artiste after she performed alongside the Los Angeles Philharmonic Orchestra recently.

Q You were selected to perform the Kuchipudi dance for the Los Angeles Philharmonic Orchestra’s production of Stravinsky’s’ Rite of Spring. How did this happen?
I was engaged by my friend Kitty McNamee who happens to be the artistic director and choreographer of this project. She wanted to experiment with the inclusion of Kuchipudi dance as a component and introduce a global element to the production. So she proposed the same to LA Phil and they were very interested in working with this element of Kuchipudi.

Q You worked with LA choreographer and artistic director Kitty McNamee for a modern contemporary dance. How did the dance practice and experience turn out?
The dance practice has been a great new experience for me. I came to understand how different their process of creation is from ours; they have a very abstract and free form approach to things with little to no rules or boundaries. Also their understanding of music is free flowing, it seems to lie in the curves, the peaks and falls, while we put everything to counting, dissect the music piece by piece put it on paper and proceed. Also one of the main things is traditionally we mould the music to suit the dance structure, here it was the other way around.

Q This show was staged with the  Philharmonic Orchestra at the prestigious Walt Disney Concert Hall. What was it like performing alongside an orchestra and how was the response to the show?
The response was overwhelming! I had the opportunity to share our sacred art especially Kuchipudi for a connoisseur of western classical art. I had the opportunity to invite the conductor on to the stage at the start of the piece like I would Lord Krishna to the Raas Leela and was given the wonder platform of the Walt Disney Concert Halls stage to do this on. As the concert proceeded at half time, the orchestra, the conductor and the entire theatre paused for my solo that lasts all of two minutes in pin-drop silence. This for me was a HUGE honour. The applause that followed at this moment echoes in my ears even now. I am very excited to be a part of this stage again next week!

Q For the first time an Indian classical dancer performed at the prestigious Walt Disney Concert Hall. How did that make you feel?
I am not sure if this is the first time, but for me it’s definitely a first! And to receive this honour with such eminent people is very encouraging for me as a Kuchipudi artiste presenting a traditional and ancient art form. The audience is seated in a 360-degree layout. It feels beautiful to be surrounded by them and share the stage with such wonderful musicians and dancers.

Q You are also one of the youngest recipients of the coveted National Award Sangeet Natak Akademi’s Bismillah Khan Yuva Puraskar — the highest honour for the Indian performing artist under the age of 40. How did you feel when you won this award?
I felt valued and encouraged. I felt thankful and very excited with all the things that were to come because of this recognition.

Q Your parents are illustrious dancers themselves and often children are compared to their celebrity parents. How do you deal with comparisons and criticism that comes your way?
Well,  I am my own person, I cannot emulate another. First of all I won’t allow myself, secondly it’s not humanly possible. I enjoy comparing myself to them and learning from their journey and them in general. So I take the positive criticism and flush out the rest.

Q There seems to be a school of thought that believes that classical dance is finding lesser audiences these days. Do you agree? Do you believe fusion performances are the way forward?
No, I disagree. Classical dance is a very powerful form of entertainment that is meant to be understood and liked by all. The only thing that varies here is the translation and evolution with time. The natyasastra and many of the earlier proponents of it were genius in passing it down effectively to generations without losing its essence and we are doing the same. I also believe that things are cyclical but traditional art forms are timeless and cannot be lost, they will be dug up if buried time and time again by the many generations. I do not believe in fusion, because that would just mean diluting the style.

Q You have travelled all over the world and performed for several eminent personalities, so what is the experience you cherish the most?
For me in the recent past – my performances at the Kennedy Center, one at the Triveni Sangrahalaya Ujjain, Siddhartha Kalapeetham were the most monumental. At the Kennedy Center, the response was overwhelming, the halls were packed, there was no room to stand and the foyer had also filled up with people at the Kennedy Center who had gathered there to see my performance. The evening was organised by the Kennedy Center, Washington DC and Indian Embassy where the foreign secretary Vinod Gokhale, the ambassador Navtej Sarna and the ambassadors from neighbouring countries were present.
It’s, however hard to point out a favourite. I also have memories of receiving a very kind fan letter after a show in Jaipur when I was seven when post was still a thing. It had arrived at our Kaka Nagar address and my parents were shocked that there was a letter in my name. Also they were shocked that I got a letter after the family show and not them but as parents they were super proud!

Q What are your immediate future plans, both professionally and personally?
I have performances scheduled in India, Scandinavia and USA coming up shortly. The next is one in Delhi on  January 17 at India Habitat Center where I will be performing a beautiful piece on the one that enjoys the Samagana - Shiva. I am currently also working on some collaborations that I plan to reveal next year in dance and music.  Personally, I have a lot of research and studies in mind in the subject of Kuchipudi and strive to be a student for life!