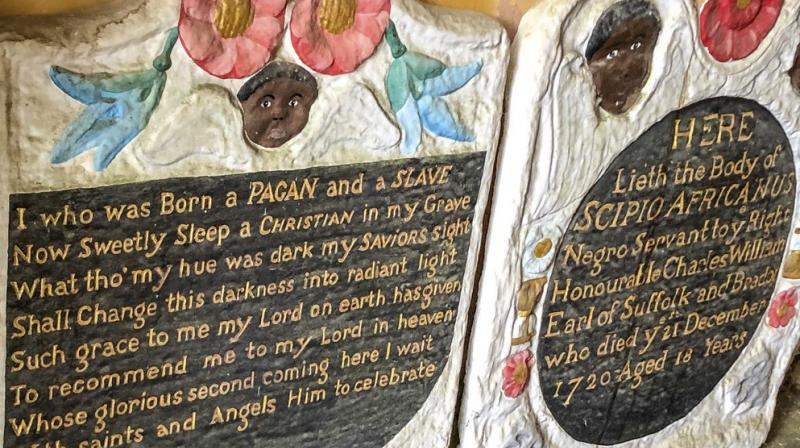 Casts of the headstone and footstone of an enslaved African man, in the entrance to St Mary's church, in Bristol, England, Thursday June 18, 2020, where the memorial for an enslaved African man have been vandalised in St Mary's churchyard in an apparent "retaliation attack" following the toppling of a statue of slave trader Edward Colston during anti-racist protests held in the wake of the killing of George Floyd in the US.(AP)

London: British officials said Thursday the grave of an enslaved African man has been vandalized in an apparent “retaliation attack” after anti-racism protesters in the city of Bristol toppled the statue of a prominent slave trader.

Two headstones in memory of Scipio Africanus, who lived in Bristol in the 18th century, were smashed. A message scrawled in chalk nearby called for the statue of Edward Colston to be restored.

“Now look at what you made me do ... put Colstons statue back or things will really heat up,” the message read.

Earlier this month, protesters attending a Black Lives Matter demonstration toppled a bronze statue of Colston from its plinth in Bristol city center. The statue was dragged to the harbor and dumped into the water.

The vandalized grave, a brightly-painted memorial in a churchyard in Henbury, Bristol, is listed as a structure of historical interest to be preserved.

“This looks like a retaliation attack for the recent events involving the Colston statue,” local official Mark Weston said.

“I’m absolutely gutted. The listed grave is part of the community’s history. To see it has been wantonly damaged has caused a lot of upset among residents,” he told Sky News.

Police said they have received a report of criminal damage to a monument at Henbury Parish Church. It said it believed the incident took place on Tuesday or Wednesday, and appealed for anyone with information to come forward.

Bristol Diocese said it was “shocked and saddened” to hear about the damage.

“We’re in touch with the council and the police about the incident and praying for peace and reconciliation,” it said in a statement.

Historic England said the tomb provided valuable evidence for research into the “clouded early history of black people in England.” It said the tomb was an early example of a memorial to a man born into slavery and who ended his life as a servant in an English aristocratic household. He died on Dec. 12, 1720.

During his life, Scipio Africanus was a servant to Charles Howard, the 7th Earl of Suffolk.

“We know very little about the lives of individual men, women and children brought to England as slaves. Graves represent one of the few forms of tangible evidence regarding the existence of slaves in England, and such graves are rare; the vast majority died without trace,” Historic England said on its website.

“This record of Scipio Africanus’s history serves to remind us of the many histories which have been lost.”

Monuments and statues around the world relating to colonialism and the slave trade have become flash points amid global anti-racism protests.

Bristol officials have retrieved Colston’s statue and said it will be displayed in a museum, together with placards from the anti-racism protest.

On Wednesday, Oxford University’s Oriel College said its governing body had voted in favor of removing a statue of the Victorian imperialist Cecil Rhodes after a long-running student campaign to remove it.