'If it quacks like a duck': Boisterous poultry land French owner in court

A court in the western town of Rochefort is set to issue a ruling in that case on Thursday. 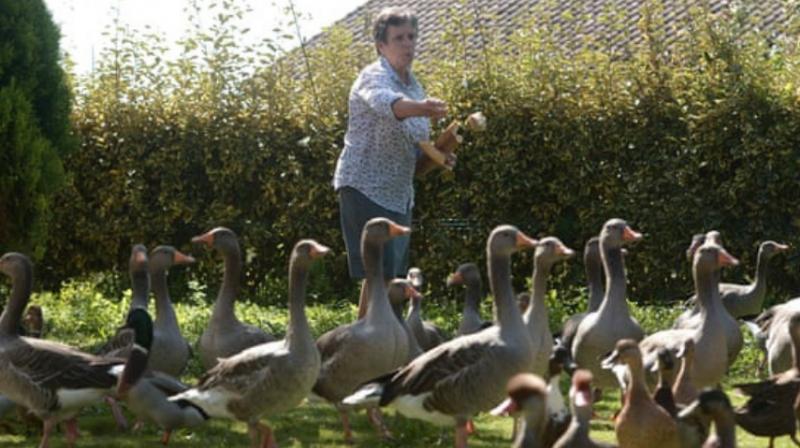 The latest case to ruffle feathers in the French countryside pits a woman rearing around 50 ducks and geese in her back garden in the southwestern Landes region -- a duck-breeding bastion -- against her newcomer neighbours. (Photo: AFP)

Soustons: Less than two months after the owner of a French rooster was hauled before a court over his rowdy crowing, the owner of a gaggle of geese and ducks is in the dock over their boisterous quacking.

The latest case to ruffle feathers in the French countryside pits a woman rearing around 50 ducks and geese in her back garden in the southwestern Landes region -- a duck-breeding bastion -- against her newcomer neighbours.

Dominique Douthe, 67, lives outside the town of Soustons, about 60 kilometres (40 miles) north of the Atlantic resort of Biarritz. She told AFP the row began a little over a year ago when the new neighbours moved into a house across the road.

With the previous owners, she claimed, "I never had any problem."

"And then he (the husband of the plaintiff couple) arrived and my poultry bothers him," she said, with an exasperated air. The case is one of several that have been cast as an attack on the rights of church bells to ring, cows to moo, and donkeys to bray throughout rural France.

The mascot of this battle between urban and rural France is a rooster named Maurice, whose early-morning crowing so annoyed his neighbours on the island of Oleron that they took his owner to court.

A court in the western town of Rochefort is set to issue a ruling in that case on Thursday.

On Tuesday, a court in the southwestern town of Dax was to hear the complaint against Douthe's cacophonous ducks and geese. The wife of the plaintiff couple, who did not wish to be named, told AFP that when they bought the house next to Douthe's, "there were fewer geese and ducks, making it less noisy."

Since then her husband had approached Douthe three or four times to try to find a solution, she said. He also hired an acoustics expert, who recommended that Douthe move her poultry pen further away from the neighbours' property and build a wall to muffle the sound -- recommendations they say went unheeded.

In a region famous for its foie gras -- a delicacy made from the livers of ducks and geese -- the case has got some locals' backs up.

"Numerous homes here have a spot for raising poultry," one woman told AFP indignantly: "We are in the Landes after all!"

A petition in support of "the Hardy ducks," as they have been dubbed after the name of a nearby lake, has garnered nearly 5,000 signatures. Soustons' Mayor Frederique Charpenel warned in a Facebook post on Friday against vilifying newcomers to the countryside as "being unable to integrate and making us lose our soul."

At the same time, she said, it is "absolutely necessary... to preserve the characteristics of the countryside."

A retired farmer who serves as mayor of the village of Gajac in southwest France has proposed a solution to the chorus of complaints against croaking frogs, cooing pigeons and other creature noises. Mayor Bruno Dionis du Sejour has asked the government to inscribe them on France's heritage list, making them eligible for state protection.