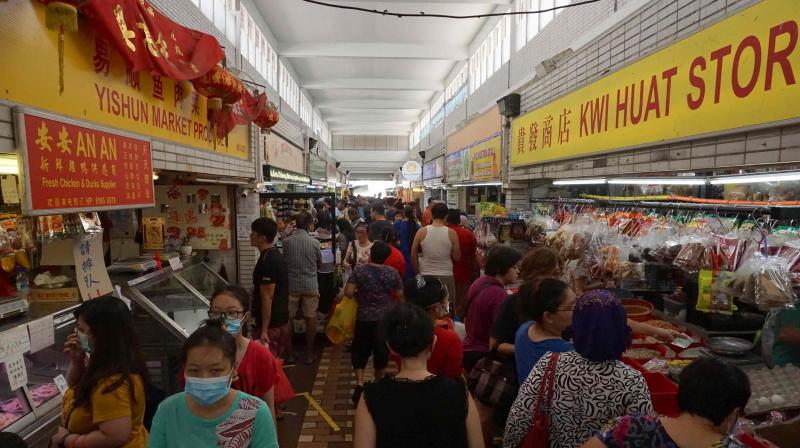 Customers queue up to buy fresh meat at a wet market. AFP photo

Washington: Amidst the coronavirus pandemic, a bipartisan group of top US lawmakers have urged China to urgently shut down all of its operating wet markets as that have a potential to expose humans to health risks through the introduction of zoonotic disease.

A wet market sells fresh meat, fish, produce, and other perishable goods as distinguished from "dry markets". It gets its name from the floors being constantly wet from the spraying of fresh produce and cleaning of meat and seafood stalls.

We write to urgently request that China immediately close all operating wet markets that have a potential to expose humans to health risks through the introduction of zoonotic disease into the human population, wrote the senators, in a letter to Chinese Ambassador to the United States Cui Tiankai.

A zoonotic disease is an illness that can be passed from an animal to a human.

Gao Fu, the director of China's Center for Disease Control and Prevention, has acknowledged that the origin of the new coronavirus is the wildlife sold illegally in a Wuhan (China) seafood market, they said.

A wet market in the central Chinese city of Wuhan is believed to be the source of the coronavirus pandemic that began in December last year, crossing from animals to humans.

"It is well documented that wet markets in China have been the source of a number of worldwide health problems, and their operation should cease immediately so as to protect the Chinese people and the international community from additional health risks, the senators wrote.

"Therefore, we are urging China to shut down all wet markets that allow for interactions between humans and wild animals that pose public health risks," the lawmakers concluded.

"We understand and respect that wet markets are an important component to Chinese society and way of life, but we believe the current moment, which has disrupted everyday life around the world, calls for extreme precautions."

Last week, China published an official timeline that said that the novel coronavirus was first detected in Wuhan in late December where it was listed as "pneumonia of unknown cause".

"They should shut down (wet markets) right away. I mean it boggles my mind when we have so many diseases that emanate out of that unusual human animal interface that we don't just shut it down. I don't know what else has to happen to get us to appreciate that," he said.

"And I think that there are certain countries in which this is a very common place. I would like to see the rest of the world really lean with a lot of pressure on those countries that have that because what we are going through right now is a direct result of that," Fauci said.

In the October 2006 issue of Current Opinions in Infectious Diseases, it was found that in Chinese wet-markets, unique epicenters for transmission of potential viral pathogens, new genes may be acquired or existing genes modified through various mechanisms such as genetic reassortment, recombination and mutation.

The wet-markets, at closer proximity to humans, with high viral burden or strains of higher transmission efficiency, facilitate transmission of the viruses to humans."