China stutters back to work as virus deaths soar

With toll topping 900, world health agency says there is concern about overseas cases 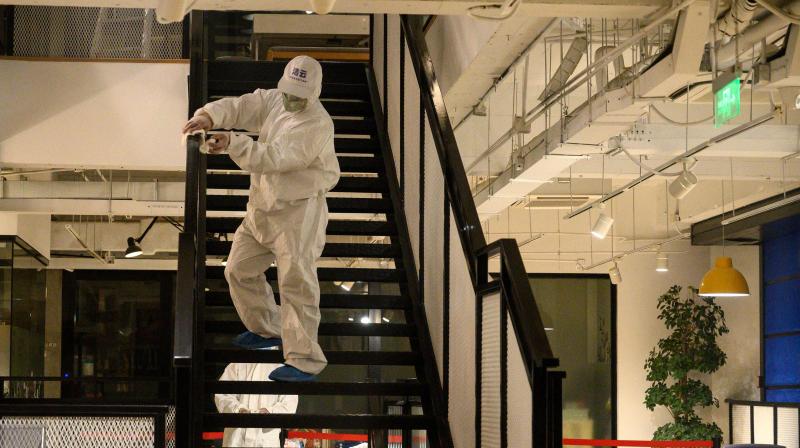 Workers wearing protective suits prepare to disinfect a business establishment in Shanghai on February 9, 2020 with workers returning to work on Monday after the extended holiday due to the virus scare and the Lunar New Year. (AFP)

Beijing: Millions of people in China were returning to work Monday after an extended holiday designed to slow the spread of the new coronavirus, which has killed more than 900 people in the country.

At least 40,000 people in China have now been infected by the virus, believed to have emerged late last year in Hubei province’s capital Wuhan.

And although the World Health Organisation (WHO) has said there are tentative signs the epidemic is stabilising in China, the agency’s director-general, Tedros Adhanom Ghebreyesus, warned that the number of cases recorded overseas could be just “the tip of the iceberg”.

His comments came as an advance team of WHO international experts left late Sunday for China, led by Bruce Aylward, a veteran of previous health emergencies.

There were some signs Monday of the country beginning to make a return to normality.

Roads in Beijing and Shanghai had significantly more traffic than in recent days and the southern city of Guangzhou said it would start to resume normal public transport from Monday.

However, tens of millions of people in Hubei province were not returning to work, as the province—the epicentre of the outbreak—remained under lockdown with travel links cut off.

Many companies were offering staff the option of working from home.

Car manufacturer Volkswagen said while some of its factories would re-open on Monday, others had delayed production for another week. Toyota has extended the closure of its Chinese plants to February 16.

Many factories involved in manufacturing medical equipment had already returned to work.

According to the National Development and Reform Commission, around 87 percent of the country’s medical mask production had already resumed.

China’s central bank said it would make 300 billion yuan ($43 billion) available in special loans to banks from Monday to help businesses involved in fighting the epidemic.

But the tourism industry remains in the doldrums, with several countries banning arrivals from China, major airlines suspending flights and international and domestic tour groups being halted.

Schools and universities across the country remained closed.

‘Tip of the iceberg’

The death toll from the novel coronavirus has overtaken global fatalities in the 2002-03 SARS epidemic.

China drew international condemnation for covering up cases during the SARS outbreak, but the WHO has praised the measures Beijing has taken this time.

However, the health body has warned that the figures could still “shoot up”.

Ian Lipkin—a professor at Columbia University who worked with China on the SARS outbreak—also warned of the risk of a “bump” in infection cases when people return to work.

WHO chief Tedros said there had been some “concerning instances” of cases overseas in people with no travel history to China.

“The detection of a small number of cases may indicate more widespread transmission in other countries; in short, we may only be seeing the tip of the iceberg”, he tweeted.

Meanwhile in Hong Kong, thousands of people stranded aboard the World Dream cruise ship for five days were allowed to disembark Sunday after its 1,800 crew tested negative for the new coronavirus.

The ship carried three Chinese passengers to Vietnam between January 19 and 24 who were later found to be infected with the SARS-like coronavirus.

Health authorities in the semi-autonomous Asian financial hub said the crew and a similar number of passengers had been released from quarantine.