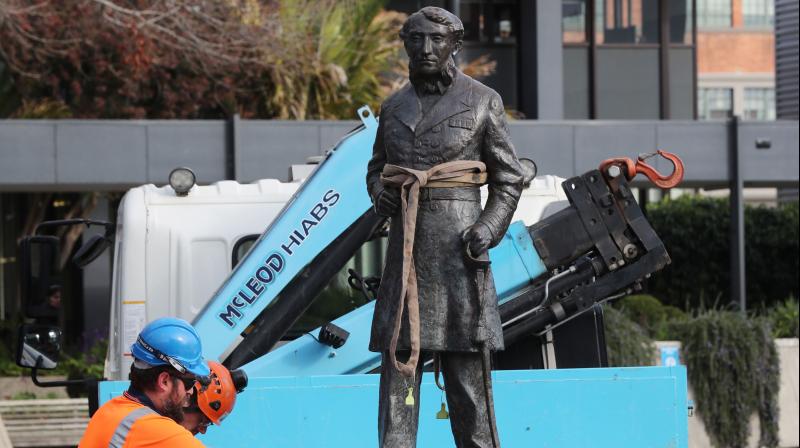 Workers remove a controversial statue of Captain John Fane Charles Hamilton from Civic Square in Hamilton on June 12, 2020, following a formal request by the Waikato-Tainui iwi (tribal confederation) and threats it would be torn down during a Black Lives Matter march due to take place the following day. (AFP)

Hamilton: The New Zealand city of Hamilton on Friday tore down a statue of the colonial military commander after whom it was named, joining a growing list of places worldwide that are reckoning with their past.

A crane hoisted the bronze sculpture of Captain John Fane Charles Hamilton from the town square Friday morning after requests from local Maori and threats from anti-racism protesters to topple it.

A small group of cheering spectators looked on.

Hamilton City Council acknowledged the statue's extraction was part of a push to remove memorials "which are seen to represent cultural disharmony and oppression" sparked by global anti-racism protests.

"I know many people -- in fact, a growing number of people -- find the statue personally and culturally offensive," mayor Paula Southgate said.

"We can't ignore what is happening all over the world and nor should we. At a time when we are trying to build tolerance and understanding... I don't think the statue helps us to bridge those gaps."

Hamilton was a naval commander who fought indigenous Maori defending their land against British colonial expansion in the 19th century.

He died at the Battle of Pukehinahina, or Gate Pa, in 1864, when -- in an early example of trench warfare -- a group of Maori in a fortified encampment successfully fended off British troops and artillery, despite being outnumbered.

The statue was donated to the council in 2013 and the council said its removal came after a formal request from the regional iwi, or tribe, Waikato-Tainui.

Anti-racism protesters had vowed to tear it down at a demonstration this weekend, with activist Taitimu Maipi labelling Hamilton a murderer.

"How can we accept that he's a hero when he's a monster who led battles," Maipi told the Waikato Times.

Waikato-Tainui praised the statue's removal, saying it was discussing other problematic colonial names and symbols with Hamilton council, including the prospect of restoring the city's original Maori name Kirikiriroa.

"This was a devastating time for our people and these injustices of the past should not be a continual reminder as we look to grow and develop our beautiful city into the future," iwi chairman Rukumoana Schaafhausen said.

Statues and place names honouring figures such as slavers and colonial military figures are being reassessed worldwide in response to anti-racism protests sparked by the police killing of African American man George Floyd.

Hamilton council said the fate of the British commander's statue and what, if anything, should replace it were still under discussion.